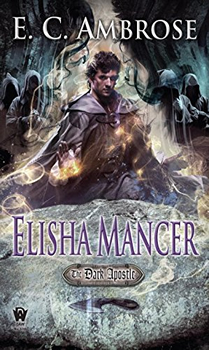 Autumn, 1347. . .terror stalks Europe as necromancers conspire to topple kings, corrupt an empire, and undermine the Holy Church itself.

Armed with a healer’s skill and a witch’s art, Elisha hurries to warn the Holy Roman Emperor and discover how to stop the mancers’ plans. A one-eyed priest, a seductive traitor, a stern rabbi, a merchant of bones—how can he tell friend from foe when he no longer recognizes himself? Every blow Elisha strikes draws him toward the wrong side of the battle. When the enemy retaliates in blood, he fights to keep his humanity lest he be consumed by the spreading darkness and become. . .Elisha Mancer

The Big Thrill recently had the opportunity to discuss ELISHA MANCER with author E. C. Ambrose:

ELISHA MANCER combines historical research with a fast-paced thriller approach—and an approach to magic that exploits the beliefs and fears of the Middle Ages.

This book includes cameos and supporting roles for some of my favorite 14th century characters including two competing Holy Roman Emperors, and the madman who conquered Rome.

All fantasy writers are likely to claim J. R. R. Tolkien as an influence, and perhaps Peter S. Beagle, two of the authors who moved me as a young reader. But I would say my approach to fiction is just as informed by authors like Steve Berry and Dan Brown who write into the secret corners of history. The authors I’m trying to learn from right now are George R. R. Martin, whose sprawling and intricate worlds enthrall readers, and Martin Cruz Smith, whose humanist work and well-crafted prose brings strange places to life.

“Elisha’s struggle to bring relief to those in need is complicated by his own need for redemption and his innate fear of what he cannot understand. This beautifully told, painfully elegant story should appeal to fans of L.E. Modesitt’s realistic fantasies as well as of the period fantasy of Guy Gavriel Kay.” ~ Library Journal starred review for Elisha Barber

“In a grim world of medieval warfare, witch-hunts and primitive surgery, E.C. Ambrose has crafted a shining tale of one man’s humanity and courage. A gritty read for those who like realism as well as hope in their fantasy.” ~Glenda Larke, author of Stormlord’s Exile 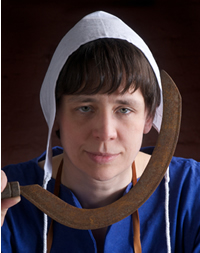 E. C. Ambrose writes “The Dark Apostle” historical fantasy series about medieval surgery, which began with Elisha Barber (DAW, 2013) and continues with Elisha Magus (2014), Elisha Rex (DAW, July 2015), ELISHA MANCER (DAW, 2017) with a final volume forthcoming. Other published works include “The Romance of Ruins” in Clarkesworld, and “Custom of the Sea,” winner of the Tenebris Press Flash Fiction Contest 2012. As Elaine Isaak, she is also the author of The Singer’s Crown and its sequels, The Eunuch’s Heir, and The Bastard Queen. Elaine quite enjoys her alternate identity, aside from a strong desire to start arguments with herself on social media. She blogs about the intersections between fantasy and history, and can also be found on Facebook and Twitter (@ecambrose). Under any name, you still do NOT want to be her hero.

In addition to writing, the author works as an adventure guide. Past occupations include founding a wholesale business, selecting stamps for a philatelic company, selling equestrian equipment, and portraying the Easter Bunny on weekends.

Oath Of Honor by Matthew Betley