As author Ed Kurtz so eloquently puts it, “Sometimes people kill for profit, sometimes revenge, and sometimes they do it just for the fun of it.”

In his new anthology NOTHING YOU CAN DO: STORIES (Down & Out Books), he demonstrates the theme with seventeen tales of crime, murder, and vengeance.

“I hope these stories entertain more than anything else,” Kurtz says, “but if the dubious morality of the characters in this collection doesn’t serve as something like a mirror the reader isn’t too keen to look into, I’d be a bit disappointed.”

What did you do before you were a writer?

I’ve been all over the place, really. In another life, I was an academic, and since then I’ve worked in corporate settings, grimy night shifts in hotels, and wandered the western world. When I left the academy and found myself behind a desk many years ago, I decided to knuckle down and start doing what I’d always really wanted to do, which resulted in hammering out my first novel (a thorough rewrite of which will finally see the light of day in 2019). In between novels, and ever since, I’ve worked on short fiction, much of it rooted in my own cultural and personal experiences in the American South and in Germany.

Tell us about your writing process. Where do you start? With a character or an idea?

It depends on the story, and it’s not always the same. Sometimes I begin with a title (like “Falldown Church”), or just an opening line that pops into my head (as was the case with “Pegleg”). A lot of the time it’s a vague concept, and at least a handful of my short pieces derive directly from personal experience. It’s also not terribly unusual for me to begin a story, hit a wall, and not come back to it until months or years later. That passing of time and accumulation of experience can provide the necessary lens through which to view and tackle the thing.

What is it about the dark and crime that fascinates you so much?

I tend to say everything I write is a love story, and I can hardly think of anything darker than that. To me, there is no story without conflict, and in life we have little peace from the things we do to one another, either. I don’t know whether any of my work can be classified as escapist or not, but in the end my goal is almost always to explore those aspects I think are within every single one of us, whether they ever bubble to the surface or just smolder in the backs of our brains. There’s something dark and criminal about all human life, in my cheerful view.

Tell us about this new collection of short stories.

All but one of the stories in NOTHING YOU CAN DO have appeared in magazines or anthologies over the last several years. The closing story is a dark Western piece called “Tanglefoot,” which is brand new to the collection.

What can readers expect to see in these stories? What effect do you hope your stories will have on readers?

Most of the characters you’ll meet are people who make pretty terrible decisions that lead them to unfortunate ends, though as the title (and title story) hopefully suggests, it’s not necessarily something totally within their power to control. There’s certainly a line of thinking that just about anybody is one bad choice or one bad day away from being a noir story, and I think that’s true. The effect I hope for isn’t necessarily sympathy for the characters in these stories, but definitely a sense of familiarity, a case of Bradford’s There but for the grace of God, go I…

Which story is your favorite and why?

That’s a tough call. I’m particularly fond of “Hell Broke Loose,” which allowed me to delve deep into the history of Austin, Texas—where I lived for fifteen years—and one of its darkest chapters. I’m also rather proud of “A Good Marriage,” which happens to be my most popular and well-received story to date, having been selected by Laura Lippman for inclusion in Best American Mystery Stories back in 2014. But ultimately, I think I’d have to go with the title story, “Nothing You Can Do,” which concerns a night of particularly bad choices made by an American abroad in Köln, Germany, and whether or not it all isn’t what the poor guy was always fated for.

What was the hardest story in the book to write? Tell about what made it difficult and what you learned in the process.

While “Hell Broke Loose” was the most research-intensive story, it was so much fun I can’t say it was particularly difficult. “In the Neighborhood,” on the other hand, was a tough one to do, if only because it deals with a group of downtrodden guys, broken by life and circumstances, who might not be the worst guys if they just weren’t so awfully racist. I endeavored to write them as richly and three-dimensionally as possible, exposing what they are and what that leaves, while avoiding cartoonish villainy. It isn’t always fun to dig into a mind like that when crafting a character, so it was a challenge in that sense.

What was the best thing you’ve read lately that wasn’t your own?

The latest from Megan Abbott, You Will Know Me, and Alex Marwood, The Darkest Secret. Both contemporary mistresses of crime fiction and required reading, as far as I’m concerned. Kristi Belcamino’s City of Angels is a contender for the best of 2017, as well, and I really loved Jeff Guinn’s biography of Jim Jones, The Road to Jonestown—so chilling and enthralling. Ed Kurtz is the author of The Rib From Which I Remake the World, Nausea, The Forty-Two, and other novels. His short fiction has appeared in Thuglit, Needle, Shotgun Honey, and numerous anthologies including Best American Mystery Stories and Best Gay Stories. Nothing You Can Do is his first short story collection. Ed lives in Minneapolis, where he is working on his next project. 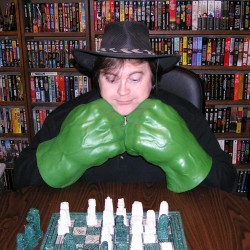