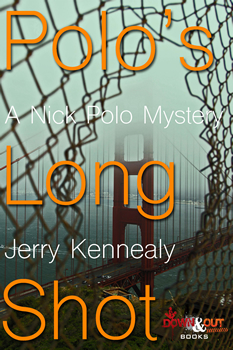 After 11 novels featuring private eye Nick Polo—the latest being POLO’S LONGSHOT—and 22 books overall, you might think Jerry Kennealy has this author thing licked. He’d be the first to tell you otherwise.

“I’ll never get it licked, but this was a fun book to write: expensive wine, glider crashes, and interesting characters,” Kennealy said. “And, as in all of my books, it never would have been written without the help of my Shirley, my beautiful wife and in-house editor. She’s a very detail-minded person. I’m not.  So, I ramble along and she will come up with some interesting findings, like, ‘Jer. The character Polo is talking to on page 223, died on page 110.’ Oops.”

This time around, Polo is enlisted by billionaire Paul Bernier to find a kukri, a priceless golden jewel-encrusted 14th century dagger, designed by the Emperor of India. The dagger has a long, bloody history, passing between warlords throughout the ages, including Saddam Hussain. The search has Polo bumping heads with Bernier’s vindictive stepdaughter, his eccentric household staff, a Miami con man, a crooked private investigator, a drug dealing nightclub owner, a New York Mafia Don, and two vicious murderers.

What is it about Nick that keeps drawing you back to him?

I like the character.  Polo is tough and savvy, but he’s also compassionate, and has a bit of a laidback, live-and-let-live attitude, something that I find is all too rare today.

What are the challenges of keeping a series character like Nick fresh for readers?

Involving him in today’s fast-changing world. It takes you six months to a year to write a book, then a life-time for it to be published, so if you’re writing in the present tense, you have to be careful not to use technology that has been leapfrogged when the book comes out. I remember being on writer’s conference panels and warning authors that we’d all be writing science fiction soon.

When you’re dreaming up plots for Nick, what comes first? A bizarre crime, a challenging antagonist, or a looming deadline from your publisher to produce?

Sometimes it can be some small fact or an interesting bit of information.  I had been brainstorming on a new Polo book, and a friend told me about a dinner he had at his house.  He’s not much into wine, but his very wealthy father-in-law is, and he came to dinner with a bottle. My friend was surprised at how much he liked the wine, a French white Boudreaux, and after everyone had gone home, he checked out the bottle’s label on the web.  The cost per bottle was $1,500, and it was known as the Crack-Cocaine of Chardonnay.

Now, I’m a wine lover, but I hover around the $15 per bottle shelves. I wondered, who pays $1,500 for a bottle of wine? What would it taste like?  And, would someone kill for a case of the stuff?  It became an integral part of the plot for POLO’S LONGSHOT.

One of the most fascinating secondary characters in the book has to be Mrs. Damonte, the witch next door. How did the idea for her come about and how fun is it to weave a character like her into a crime novel like this?

Ah, Mrs. Damonte—everyone loves her, me included.  I was raised in the Excelsior District of San Francisco, an area that was predominately Italian. Mrs. D is a composite of the many wonderful grandmothers of my friends that I’d meet. But none of them could compete with Mrs. D.  I remembered one in particular, who, like Mrs. D, was always dressed to go to a wake, though no one in the neighborhood actually died. There was a local funeral parlor, Valente Marini, so when someone passed, the message was, “Hey, did you hear about Joe’s father? He Valente Marinied.”

How has being an ex-cop and a private investigator helped you in writing Nick’s adventures?

Both jobs were a tremendous help.  We had a lot of one-man radio cars in the San Francisco Police Department back then, and that was really an education, in life and communication.  You’d come in contact with the public by helping someone locked out of their house or car, traffic accidents, and you’d often be the first responder to a robbery, homicide, assault or a child molestation.

I still vividly remember being a raw rookie, less than a month on the job, and responding to a call in an apartment house in the Mission District. Strange sounds coming from one of the apartments. I could hear them in the hallway. A child sobbing loudly. No response, so I kicked in the door and found a two-year-old boy, absolutely covered in his own filth, locked in a closet. His parents had locked him up while they went down to a corner bar.

Shoving both of them into a paddy wagon—to paraphrase Mr. Eastwood—made my day.

As a private investigator, I got to know the entire Bay Area quite well.  My “territory” stretched roughly from Sacramento to Monterey. A case usually started with an attorney, then I’d be off to talk to a judge, or a bookie, a pilot, a bartender, a hooker, or a cop.  There were a lot of those.

The job took me to some interesting places that found their way into my books: backstage at the opera house, Pacific Heights mansions, luxurious yachts, Chinatown gambling dens, seedy Tenderloin hotels, S&M bars, visits to interview prisoners at San Quentin, Folsom Prison, and down a few dark alleys.

Many of my cases involved civil suits resulting from a criminal act: rape, wrongful deaths, homicides, arson. Great cases from an investigators standpoint—the crime had usually taken place a year or two earlier, the bad guy was quite often behind bars, so the witnesses and the police were much more likely to talk freely.

A friendly tip: keep your home owner’s policy up to date—the defendant in many of these cases was the home insurance carrier. 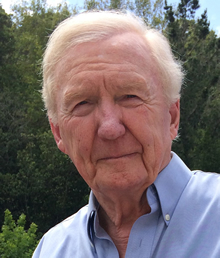 Jerry Kennealy has worked as a San Francisco policeman and as a licensed private investigator in the City by the Bay. He has written twenty-two novels, including a series on private eye Nick Polo, two of which were nominated for a Shamus Award. His books have been published in England, France, Germany, Japan, Italy and Spain. He is a member of Mystery Writers of America and Private Eye Writers of America. Jerry lives in San Bruno, California, with his wife and in-house editor, Shirley.