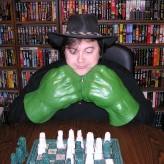 By G. Robert Frazier Even as the excitement over Susie Steiner’s first crime novel, Missing,…

A Negro and an Ofay by Danny Gardner

By G. Robert Frazier Danny Gardner first made a name for himself as a stand-up…

By G. Robert Frazier Armand Rosamilia has a lot going on in his head. At…