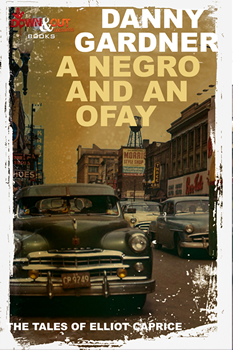 Danny Gardner first made a name for himself as a stand-up comedian on HBO’s Def Comedy Jam. So, what’s he doing scribing dark, gritty tales of crime in 1950s Chicago? Turns out the author of A NEGRO AND AN OFAY has also toiled in scriptwriting, acting, and directing—a real Renaissance Man of the literary arts.

“When you take them separately, it seems like a lot,” he says. “But be it stand-up, or screenwriting, or acting, it all comes from my deep, spiritual love for words. First, comedy and acting gave me a career and, eventually, a small place in pop-culture. Now that I’m a published novelist, it’s the ultimate expression of that love. I’m always going to write, be it the next Elliot Caprice novel, or just doing improv on stage for ten minutes. That’s who I am. That’s how I love myself the most.”

In addition to his comedy bits, Gardner is a frequent reader at “Noir at the Bar” events nationwide, and blogs regularly at 7 Criminal Minds.

Fortunately, the transition from the stage to the keyboard wasn’t hard.

“Once I gave myself a chance, I realized my talent was suited for long-form writing,” Gardner says. “I’ve found the proper outlet for my creative desires. I could finally stop cramming all the world building and multiple points of view into screenplays and comedy bits.”

In this interview with The Big Thrill, Gardner shares details about A NEGRO AND AN OFAY, its genesis, and his story of success.

Tell me about the title of the novel and what readers can expect to see in your book.

Readers will walk in the shoes of a man who is both black and white, representing the Janus of American racial identity. During his search for A NEGRO AND AN OFAY, Elliot finds himself. Perhaps the reader will find a bit of themselves.

So who is Elliot Caprice? How did he manifest in your mind and novel? What drives him?

Elliot is someone I conjured from the genetic memory of folks in my bloodline. He sounds like my mother, acts like my father, and sometimes resembles myself. In the first book, he is driven by anger, although he learns this isn’t sustainable and eventually finds a better way to face the world.

Is there some of you in your lead character? In what way?

My sense of indignation and my quiet fury at society’s ills feel like Elliot. My desire for inner peace feels like him as well. And I’ve been in a fight or two in my life.

How and why did you decide to set this story in the 1950s?

As a lifelong hardboiled fan, it’s never been lost on me that the genre’s classic period is also an era of abject racism. How can I write a black gumshoe and avoid it? I found it better to embrace it and use it to give the work more heft and relevance.

What were the challenges of setting the story in that time period? What research did you have to do to capture that setting in your writing?

Readers are familiar with New York and Los Angeles, but what most folks know about Chicago is Al Capone, Michael Jordan, and Barack Obama. I used figures and events from Chicago’s true crime history intersected with the dawning of the Civil Rights Movement to build Elliot’s world. That took serious research.

What was your hardest scene to write? In what way?

The violent scene in the bowling alley where Elliot secures his first major clue. To this day, there is racial hostility in Chicago on par with the segregated South of the 60s. I worried it’d seem fantastical to a post-racial audience.

Tell me about the genesis of this book. This was previously self-published but has since been revised and expanded, correct?

The small press that gave me my original deal shuttered just a month before my publication date. Shortly thereafter, I found a wonderful agent in Liz Kracht from Kimberly Cameron and Associates and, after the query process, we decided that Down & Out Books represented the best chance to get it out in the world in its unexpurgated form. I worked with Liz on expanding the material to draw out more of the social aspects of the plot. Then my publisher Eric Campbell put me through the paces. It’s the version I can finally be most proud to represent.

Since you have experience in film, is there a script version of A NEGRO AND AN OFAY in the works? Will we see Elliott Caprice again?

Well, it’s broken down into what we call a show bible because drawing from my background, that’s my writing process. Right now, I’m halfway done with the next book in the series, so Elliot hops in his Rocket 88 and rides again. If you’re asking me: will we see him on the screen—well, that’s the fantasy of most of us writers, isn’t it? It’s funny how, in their review, Publishers Weekly calls the book “an energetic if episodic saga,” which may seem a bit like a slight, but to me, that feels right. They also mentioned seeing Danny Glover as one of the characters, which is bizarre, as that’s how I’ve always imagined him. It’s beginning to feel like fate.

What formal training do you have as a writer? In other words, how did you learn your craft?

I have no formal training outside of being an entertainer since I was 17 years old and growing up across the alley from Carter G. Woodson Public Library in Chicago. I attended college for about a month before I did stand-up for the first time. Then I followed that path, and I’m glad I did. I will say I’m fortunate to keep company with highly educated people. Professors and MFAs and whatnot. They’re my beta readers, and whoa, they don’t play. I believe in education. Perhaps I’ll go back and actually get one. 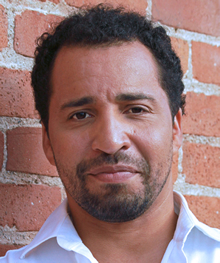 From his beginnings as a young stand-up comedian (Def Comedy Jam All-Stars vol. 12), Danny Gardner has enjoyed careers as an actor, director, and screenwriter. He is a recent Pushcart Prize nominee for his creative non-fiction piece Forever. In an Instant., published by Literary Orphans Journal. His first short fiction piece, Labor Day, appeared in Beat to a Pulp, and his flash fiction has been featured in Out of the Gutter and on Noir On The Air. He is a frequent reader at Noir at the Bar events nationwide. He blogs regularly at 7 Criminal Minds. He is a proud member of the Mystery Writers of America and the International Thriller Writers.

Danny lives in Los Angeles by way of Chicago. To learn more, please visit his website.

The Darkness of Evil by Alan Jacobson