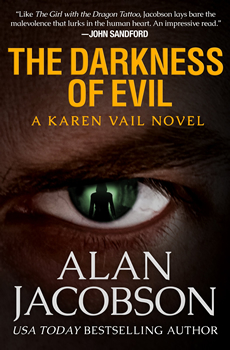 Want to know what goes on in the mind of a serial killer? One very entertaining way to find out is to read Alan Jacobson’s latest novel. THE DARKNESS OF EVIL is one thriller that will keep you up reading all night… and you WILL want to keep the lights on.

As the book opens, one of the most notorious serial killers in history is serving a life sentence in a maximum security prison. After he executes a brilliant, and brutal, escape, the U.S. Marshals Service pursues him with the help of FBI profiler Karen Vail. Vail is a very likeable protagonist who would be a blast to hang out with.

“She’s got a sharp sense of humor,” Jacobson says, “New York sarcasm that’s embedded in her psyche—though she’s learned to tone it down over the years. Rather than verbalizing  those acerbic and often very funny remarks as retorts, she’s now more likely to keep them as thoughts between herself and the reader…an inside joke. Even in thriller and suspense writing, humor can be magical amid the tension.”

And Vail does not see herself as a heroine. Jacobson writes her as a confident woman who knows she’s a good cop and a skilled profiler. 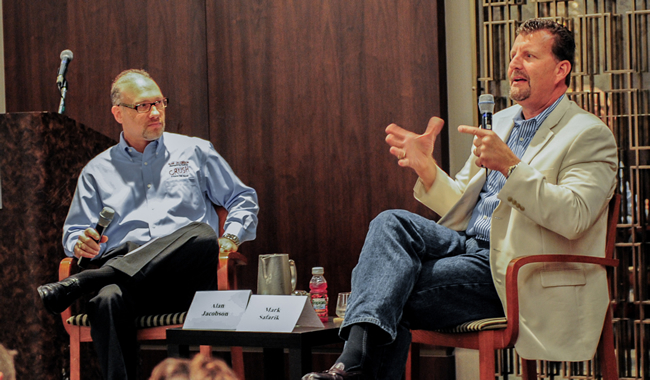 As Jacobson says, “She has an affinity for zeroing in on things that can help law enforcement find serial killers, rapists, bombers, and arsonists. But she’s like you and me because she has human reactions to situations: she doubts herself and gets frustrated, angry, and/or embarrassed when she gets something wrong—which happens—just like it happens to each of us.”

On the other hand, if you see a hero as someone who combats adversity through ingenuity or bravery, sacrificing their own concerns for some greater good, then Vail indeed fits the bill. She shows it in THE DARKNESS OF EVIL, launching a no-holds-barred manhunt.  But her quarry, Roscoe Lee Marcks, will do anything to keep his freedom including killing his own daughter. And Jacobson has the expertise to create a true master villain, having lived and breathed serial offenders for 23 years. 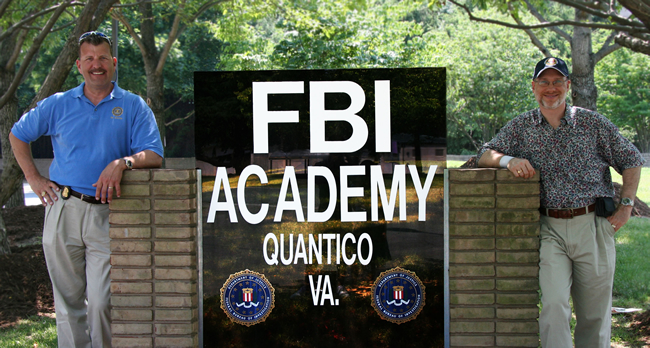 Jacobson with Safarik while researching Inmate 1577 at the FBI Academy.

“I’ve received ongoing personal instruction from two FBI profilers,” he explains. “ I’ve made numerous trips to the Behavioral Analysis Unit in Quantico, I’ve attended training seminars given by the profilers and their colleagues, and I’ve parsed serial killer interviews and real cases with them.”

He has also brainstormed story ideas with the experts, so he gets the subject matter at a deep level. Keeping his serial killer grounded in reality increases the fear level.  And the strength of his novels does not depend on the hero and villain alone. It is the family of characters that makes them great.  In this case that includes the retired profiling legend responsible for Marcks’ original capture. He may well hold the key to stopping him again.

Of course, the villain is one of the most important characters. If he isn’t impressive, we can’t see how great the protagonist is. Roscoe Lee Marcks, the antagonist of THE DARKNESS OF EVIL, is absolutely chill-worthy, but not just because he’s a big, imposing guy.

“What makes him so scary is that he’s very smart and law enforcement wise,” Jacobson says. “He has a goal, and he knows how to achieve it. The common sense things law enforcement often uses to locate these guys would not work for him. Marcks knows how to avoid and evade the investigative tools that would ensnare a lesser criminal.” 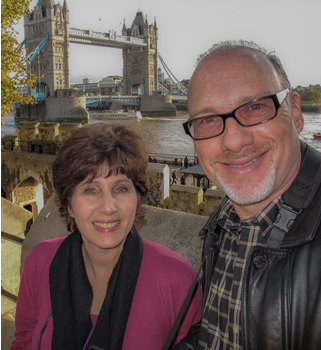 Jacobson with his wife, Jill, in England.

Jacobson is able to inject extraordinary authenticity into the characters because of the time he has spent with just about every major law enforcement organization in the country.  He says the most important thing he has learned from that experience is a sense of their level of commitment.

“They all believe in what they’re doing and many have reasons why they got into upholding the law. They also feel for the victims of violent crimes and many become personally involved with the families, a relationship that can last long after the case is solved.”

The one part of their job he can’t really show us is the fact that many of these cases involve slow, plodding investigations that can become tedious.

“Paperwork is an unfortunate fact of a cop’s life. That won’t work in a novel or movie because such stuff is boring. As writers, we have to distill it down to the more exciting elements and shove the uninteresting parts of the job out of view of the reader.”

Vail’s career is far from over. Jacobson has no trouble coming up with ideas for the next book. In fact, he says it’s really a matter of finding time to write them all. 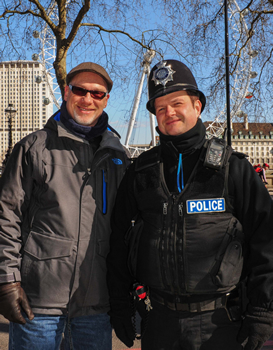 Jacobson in London with Metropolitan Police Bobby while researching “No Way Out.” He worked extensively with Scotland Yard.

“I don’t sit around trying to think up my next book. It’s always which one in my file is the story I’m going to work on next. That said, having an idea doesn’t guarantee it’s worthy of supporting a novel. For two decades I’ve said in interviews that I’d never put my name on a book that I wasn’t excited about.”

Apparently that got put to the test a few years ago when Jacobson, several weeks into outlining a Vail novel, realized that the story just wasn’t working for him.

“I was getting very stressed over it; I felt like I was reaching, forcing things—which I’d never felt, ever. But these books take a solid year, if not longer, to outline, research, and write—and I write on deadline—so the prospect of scrapping it and tossing two months’ work out the window was difficult. But I did what I always preached and ditched it, and started fresh with another idea I had in my file that excited me. I quickly knew I’d made the right decision.”

And when the author is excited about his story, it’s more likely the reader will be too. Test that theory by sitting down with THE DARKNESS OF EVIL. 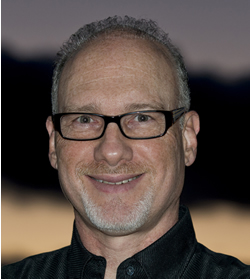 During his twenty-four year career in publishing, USA Today bestselling author Alan Jacobson has learned a thing or two about writing engaging stories and creating characters we care about. Jacobson has embedded himself with law enforcement officers across a range of agencies, including a multi-year stint with the FBI’s Behavioral Analysis Unit in Quantico; the DEA, US Marshals Service, ATF, NYPD, SWAT, and local bomb squads. In addition, he’s worked extensively with the US military, Scotland Yard, criminals, armorers, helicopter and fighter pilots, CEOs, historians, combat surgeons, astronauts, rocket scientists, and Navy SEALs.

These experiences help Jacobson create characters we care about and gripping, realistic stories. His series protagonist, FBI profiler Karen Vail, has resonated with both female and male readers and inspired esteemed writers such as Nelson DeMille, James Patterson, and Michael Connelly to call Vail one of the most compelling heroes in suspense fiction. Likewise, his OPSIG Team Black series has been lauded by real-life Navy SEALs.

Jacobson’s books have been published internationally and several have been optioned for film and television. A number have been awarded “Best of the Year” by Library Journal, The Strand Magazine, The Los Angeles Times, and Suspense Magazine.

Jacobson has been interviewed extensively on television and radio shows, including CNN, NPR, and multiple ABC, CBS, NBC, and Fox network affiliates.

To learn more about Jacobson, please visit his website.