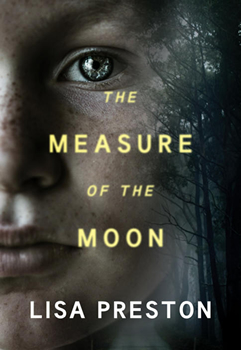 Lisa Preston is no stranger to adventure. She’s been mountain climbing in Alaska, Ecuador, Chile, and Argentina. She’s travelled alone through Europe and Asia. She’s worked as a paramedic and a patrol officer. As a police detective, she worked in the Vice unit, in Crimes Against Children, as a Hostage Negotiator, and as a supervisor in Internal Affairs. Throughout her career in emergency services and law enforcement, she was building memories, many of them sad, all of which laid the foundation for her current career as a novelist.

Of her journey toward publication, she says, “Being a reader set me on the path to writing. I wanted to create absorbing fiction. It took years and more than a million words before my uber agent signed me and made things happen.”

Her latest book, THE MEASURE OF THE MOON, deals with childhood post-traumatic stress disorder. Asked what role her work in the Crimes Against Children unit played in the development of the story, she says, “Oh, my, it’s there. Whatever someone unfamiliar to the investigative specialty of CACU might imagine—it’s tougher and more heartbreaking. The failures are haunting. The audio, video and direct experience I’ve seen and heard cannot be undone. There are people in this world who do very bad things to the most vulnerable victims.

I’ve interviewed kids who were clearly threatened to not reveal their secrets to me. I remember a kindergartener putting his fingers in his ears and going under his little interview chair when I asked him to tell me what happened. I remember almost blowing a case because my anger and disgust with the perpetrator showed. Your face needs to be understanding and non-judgmental, just interested and curious, when talking to both victim and suspect. If I wasn’t doing a good job hiding my emotions, I grabbed a partner. On this case, I went behind the mirror while a buddy saved my case by telling the bad guy how understandable the repugnant behavior was.”

Of course, writing alone is not enough for a woman with Lisa’s adventurous spirit. To fulfil her need for excitement, she competes in “the obscure sport of Ride and Tie” on two former racehorses adopted from a rescue. The sport involves a combination of running and riding on rugged, back country trails, covering distances of 20-35 miles per race. She also does tracking with a German Shepherd acquired from a rescue.

In addition to her fiction, Lisa’s writing credits include articles, essays, and books on animal care and training. Her thriller, Orchids and Stone, debuted in April of 2016, while her new suspense novel, THE MEASURE OF THE MOON, was just released in April of 2017. Let’s welcome Lisa to The Big Thrill.

Thank you for taking the time to talk to us about your new book. Can you tell us a little bit about how you came up with such an unusual and evocative title and how it reflects the themes of the novel?

In a half-dozen books, this is the first time a publisher has gone with my original title. The meaning is laced throughout. Everything happens at night, from the initiating spark to the World War II incident. The child becomes a night watchman, and in the Gillian story, she gets a life-changing financial break with her photo of the Peaks of Eternal Light. Even the dog is named for a lunar feature. There’s more that can wait in the novel for readers to discover.

Greer is a sensitively drawn, multi-dimensional character. How did you put yourself so thoroughly into the point of view of a nine-year-old boy?

Thank you so much for that feedback. I do extensive literary character sketching before, and as, I write. I know secondary characters well, but go deeper with protagonists. A lot of early effort leads to understanding each person’s point of view.

Your book has been called atmospheric, spell-binding, and compelling. What advice would you give to aspiring and pre-published writers who would like to accomplish that level of work?

How gratifying when readers respond so favorably. Rewriting makes magic. A first draft is less than half of the final effort. (I won’t quibble over how much less, just somewhere between ten and forty-five percent.) Deconstruct scene by scene, line by line. Everything must reveal character or advance the plot. Everything. The delete key is your friend. The draft was infatuation, now get married and really make the manuscript work.

What do you think distinguishes your books from other thrillers?

They seem to have cross-over appeal to contemporary fiction readers. My stand-alones contain reader’s guides and get picked for book club selections. It’s always an interesting experience to Skype in with a group that chose Orchids and Stone. I’ll participate with clubs reading “Moon,” too.

What other kinds of marketing and promotion, if any, do you do?

I’m the world’s worst—I’m not on Twitter and I drive my agent nuts because I’m in the sticks, regularly losing phone and internet. I missed a scheduled Reddit when a storm killed our ’net.

I’ll be incommunicado for a week, camping with my horse and hubby, then notice that [my agent] Mark Gottlieb has been trying to reach me. I stand on the right rock that lets the cell connect. I can barely picture his world in Manhattan. He hears a whinny behind me and asks, “Was that a horse?” Um, yep, and I have no electricity right now. Not a great way to engage in book promotion.

What’s next? Will we see a new book soon?

Between the Wind and Water, another stand-alone suspense, deals with parental abduction. On the mystery front, my horseshoer amateur sleuth is scheduled to release next spring. The protagonist of my coming thriller series is an Alaskan linguist/bush pilot/globe-trotting single mom—no release date yet. 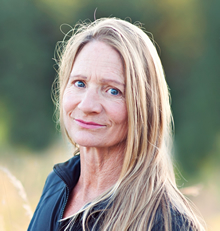 Lisa Preston’s experiences as a mountain climber, fire department paramedic and police sergeant are channeled into fiction that is suspenseful, fast-paced, and well acquainted with human drama. She has lived in Arizona, California and Alaska and now makes her home in western Washington.