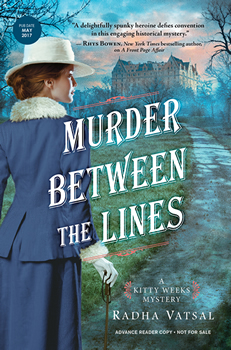 For many writers, the excitement of being a published debut novelist is quickly followed by the enormous challenge of the second novel. Some really struggle with writing a second book or sequel in a series, particularly when that debut has been successful, which Radha Vatsal’s historical mystery,  A Front Page Affair, most definitely was. Yet for Vatsal, writing her new Kitty Weeks novel, MURDER BETWEEN THE LINES, was easier then book one.

“Being a debut author is fun but also scary,” she says. “There’s a steep learning curve.  Everything you’re doing, it’s for the first time.  For me nerves were baked right in to the experience.’ When it came to writing the second book, those anxieties had lessened.  “It was very freeing and I felt like it flowed easily compared to the first one.”

And flow it does. Vatsal’s young female journalist protagonist Kitty Weeks returns in this pacey, cleverly-plotted story set in New York in 1915-16. Kitty, who works for the New York Sentinel Ladies’ Page is tasked with writing a piece about Westfield Hall, a prestigious girls’ boarding school. Kitty expects to find an orderly establishment teaching the safe, standard fare for schoolgirls in 1915, such as French and dancing. But she’s surprised and intrigued to see the work of students like Elspeth Bright, the daughter of a scientist heavily involved in naval technology, who has inherited her father’s interest and talent for scientific inquiry.

A terrible tragedy strikes soon after their meeting when Elspeth is found frozen to death in Central Park. The doctors proclaim that the girl’s sleepwalking was the cause, but Kitty isn’t convinced. Determined to uncover the truth, the intrepid Kitty’s investigations involve her in a dangerous scenario—a murder that may involve Elspeth’s scientist father and a new invention by Thomas Edison. As with Kitty’s first outing, there are plenty of plot twists and turns to keep the reader guessing right to the conclusion.

It was in fact the real-life account of a somnambulist/sleepwalker that inspired Vatsal’s plot for MURDER BETWEEN THE LINES. Vatsal likes to carry out a lot of her research and immerse herself in the world of her novels by reading issues of the New York Times from late 1915 to early 1916.  It was in one such issue that she found the real-life case of a somnambulist. “The minute I saw the story, I knew I’d found Kitty’s next mystery,” says Vatsal. “The real case was pretty much as described in the novel: a girl whose family knows she’s a sleepwalker, walks out into the snow at night and freezes to death.  The only difference is that in the real story no one suspected foul play.” There was more.  “The real girl also attended boarding school and studied ‘too much,’ and the plot just flowed from there.”

For those of us in the twenty-first century who may not have heard of it, the concept of girls harming their health through over-studying might seem incredible. But yes, it did exist and Vatsal uses it to great effect. Kitty comes across textbooks such as the 1870s Sex in Education; or, A Fair Chance for Girls by Dr. Edward Clarke. This is a real book, even though its advice is often bizarre to the point of laughable. Dr. Clarke has a jaw-dropping theory that ‘girls who attend academies or institutions of higher learning subject themselves to rigorous mental exertion, which diverts energy away from the reproductive system, and this, in turn, leads to hideous mental and physical consequences.’

Vatsal mines all of this to great effect in the novel, both as a plot device for her mystery and to enrich the reality of Kitty’s world. “Back in the 1910s, people consulted self-help books and read non-fiction medical books with the same appetite as we do today,” she says.  “For me, using real books as much as possible is fundamental to the story I’m trying to tell.”

With her current day knowledge, I wondered what would be the one piece of advice or information that Vatsal would give to Kitty and her friends. ‘Give up those corsets!  They must have really restricted women’s ability to breathe properly—no wonder women were fainting all the time! Fortunately, one major change by the 1910s was that women’s undergarments were no longer as restrictive.  A young active woman like Kitty would have been able to choose to wear a slip and petticoat and that sort of thing, but no bone stays.”

Making sure that her research is integral to the story is also key for Vatsal. Not all of it can find a place in her books, no matter how appealing a gem it is. She had to leave out, for instance, the hazards of daily bathing to some women’s health and “The case of a young woman who supposedly wore her corset tied so tight that it ended up severing her liver into two!”

As well as mining the history for plot, Vatsal finds characters, too. There’s an appearance by a major real historical figure, President Woodrow Wilson and his new wife, Edith Bolling Wilson. Vatsal says she loved incorporating the President into the novel.  “His speech at the Waldorf-Astoria about how ‘America can no longer be a provincial nation’ is central to the changes going on at the time. And now, a hundred years later, that sentiment feels very relevant. “

Vatsal also tells me that Edith Bolling Wilson will play a growing role in Kitty’s continuing adventures. “The third Kitty Weeks is in progress.  My vision is for the series to follow Kitty all the through the end of WWI and to 1920—when women in the U.S. get the vote.  So stay tuned!” 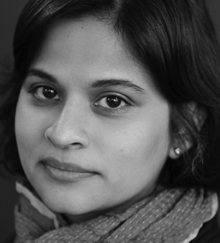 Radha Vatsal grew up in Mumbai, India, and came to the United States to attend boarding school when she was sixteen. She has stayed here ever since. Her fascination with the 1910s began when she studied women filmmakers and action-film heroines of silent cinema at Duke University, where she earned her Ph.D. from the English Department. A Front Page Affair is her first novel. Radha lives with her husband and two daughters in New York City.

To learn more about Radha, please visit her website.

The Measure of the Moon by Lisa Preston