Lee Weeks has been a cocktail waitress, a nightclub hostess, an au pair, a disc jockey, an English teacher and a personal fitness trainer. Now she’s about to become a woman.

And while she’s committed to the transition, it’s not necessarily an easy one for this mother of two grown children, who’s spent the last four years as a man.

Make that “as a Mann” –Johnny Mann, an inspector in Hong Kong’s Organized Crime and Triad Bureau, whose deeds Weeks chronicled in four bestselling novels. But when Weeks’s new novel, DEAD OF WINTER (Simon & Schuster), hits the shelves in a few days, Mann is nowhere to be found. Instead there’s a new sheriff in town—Ebony Willis, a Detective Constable in London’s Metropolitan Police Service and the lead character in Weeks’s new series.

“Johnny Mann’s life as a policeman working in Hong Kong came to an end in the last book KISS & DIE,” Week says. “It seemed like an ideal time to establish a new set of characters UK based. A part of me also wanted a new challenge. I wanted to create a new series where the story – the plot – is everything, where each story stands alone and my murder squad is embroiled in it.”

Weeks is quick to assure her readers that “they will have a bank of characters to get to know in my murder squad—male and female officers that they can bond with along the way. But the story will not be compromised. I want people to love the strong storyline.”  She also promises that they haven’t seen the last of Johnny Mann. “I have got the next two Johnny Mann books mapped out so I will give myself a few books in the new series to get established then return to check on Johnny’s progress,” she says.

A self-described “plot led” novelist, Weeks offers that “being either character or plot led is something you are born with.” She says she “didn’t know what I was until I started to write but I should have had an inkling by the type of films I enjoy,” and adds “I think all thrillers should be plot led.”

In DEAD OF WINTER, which Weeks says “started out in my mind as a story about the use of cadaver products in the cosmetic industry,”  that plot starts with  two bodies surface in the garden of a rented house in North London. What also surfaces are fingerprints linked to the brutal slaughter of a family in a Sussex holiday cottage more than a decade earlier. Metropolitan police officer Callum Carmichael, whose wife and child were the murder victims, emerged as the prime suspect, but there wasn’t enough evidence to arrest him. So the case was hushed up and the trail left to go cold. Now, with fresh proof that the killer is still out there, enter Ebony Willis, who’s sent to find Carmichael, and also finds that every piece of information she tells him could lead a dangerous man closer to his prey.

Or, as Weeks says, “Victim, suspect, policeman. When the lines blur, who do you trust?”

And she’s already plotted out TRACY’S DAUGHTER, the working title of next book in the series, which is “very much on its way.” It revolves around the daughter, Danielle, who Tracey had when she was fifteen and gave up for adoption. Twenty-three years later Danielle comes to find her birth mother, then disappears leaving Tracy to look after her young son Charlie. The murder squad believes Danielle has become the latest victim of a serial killer preying on single mothers. “Ebony Willis goes undercover and faces becoming the next victim as Charlie begins to speak about what he saw and the murderer plays a sadistic game with Danielle’s life,” Weeks says.

Even though she wanted to strike out in a new direction, Weeks, who lives in Devon in the south west of England, admits that “Johnny Mann is more me than Ebony Willis.”

“Although her childhood is much more similar to my own from the point of view of constantly moving and feeling like an outsider, Ebony Willis is a watcher and an observer,” she explains. “I think I go with Johnny on most things. Both of the characters struggle to feel part of the world. With Johnny it was one single terrible incident that changed him forever. With Ebony it was years of trauma and difficulty that has shaped her. They both carry an inner knowledge of how something terrible feels. How they have used that knowledge differs. Ebony has learned how to shut herself off from the pain and is tougher than Johnny. Johnny wears his pain on the outside and cannot hide it. I think the audience will be prepared to watch and wait with Ebony and see her grow. She is young yet. She’s just beginning her journey.”

Many aspects of that journey will stem from Weeks’s late father, himself a police officer, who was a huge influence. “My dad loved people and he was a great detective because of it,” Weeks says. “He wanted to know all about what made people tick. He taught me to be a good listener and to respect others.” While her father was ill, Weeks’s mother read him THE TROPHY TAKER, the first Johnny Mann book, and “he loved the characters and was really helpful in fleshing them out.”

Weeks, herself, will contribute other aspects of that journey, drawn from a past that had her set out, at age seventeen, on a seven year journey through Europe and Asia and included being a heroin addict and nearly become a victim of sex trafficking. Consequently her books are tinged with cautions.

“My experiences have left me with a valuable understanding of the Dark Side,” Weeks states without hesitation, a result perhaps of what she taps as her worst trait: “I like to take a few too many risks and have little feelings of self-preservation.”

“My life will always overspill into my books and I hope some of the things I touch on such as human trafficking or the missing children in the UK touch a reader’s raw nerve as they do with me,” she says.

Weeks says her greatest experience as a writer came “when Father Shay Cullen, a wonderful priest who works with the abused, abandoned and imprisoned children in the Philippines, shook my hand and said I’d done a good job with my accurate portrayal of the problem of sex tourism in my book THE TRAFFICKED.” She notes that while DEAD OF WINTER and the new series “will see me grow and hone my story telling skills,” she’ll “still get my messages in albeit a little more subtly!” Those messages are, in a way, a representation of Weeks’s being “eternally optimistic” and always “looking at the bright side of any calamity.”

Although she may have abandoned her dark side, Weeks still finds the grey side instructive. FIFTY SHADES OF GREY, which she terms at once the most under and the most over rated book she’s ever read. “It will change the face of erotic literature and it is a resounding success story for self believers,” she says. “But I learned that you can only cut and paste a sex scene so many times.” Instead, she draws on-going inspiration from THE LAST OF THE MOHICANS, the one book she wishes she had written, calling it “the perfect story” which “has everything from massive fight scenes to the anguish of unrequited love.”

If she had written it, the unrequited love would have been Brad Pitt, with whom she’d like to share an otherwise deserted island. Like all her writing, she would have done so on the Mac that resides on her red desk cluttered with fans, which she collects, and numerous pairs of glasses “because I’m always losing them and it’s very hard to find glasses without glasses.” She would, as always, tried her best to avoid her tendency to “jump about inside various people’s heads” and to adhere to “ending each chapter with suspense.”  And there would have been music on, maybe from a radio playing low, since she needs “a certain amount of noise.” With any luck, one of the songs would be “Rocksteady” by the Uniques. That’s the song Weeks says captures her personality: “very easy going, laid back and have a sunny, soulful nature.”

Don’t let that fool you, however. Weeks says that the drink that captures her is a cosmopolitan: “It’s not as sweet as it looks and packs a punch.”

Lee Weeks was born in Devon. She left school at seventeen and, armed with a notebook and very little cash, spent seven years working her way around Europe and South East Asia. She returned to settle in London, marry and raise two children. She has worked as an English teacher and a personal fitness trainer. Her books have been Sunday Times bestsellers. She now lives in Devon.

To learn more about Lee, please visit her website. 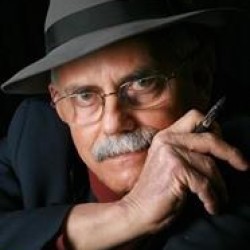 Latest posts by Gary Kriss (see all)
0
No Comments Yet