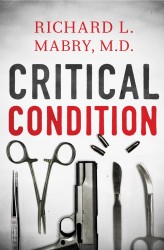 He set the writing world ablaze with works such as “Radioallergosorbent Microscreen and Total Immunoglobulin E in Allergic Fungal Sinusitis,” “Management of Epistaxis by Packing” and, of course, the legendary “Rhinitis Medicamentosa: The Forgotten Factor in Nasal Obstruction.” Now Richard L. Mabry is back and although his latest work contains no mention  of antihypertensives, rhynotomies, turbinoplasties or even—gasp!—cricothyroidotomies, his fans, of which there are many, won’t be disappointed.

Instead, when they open the pages of CRITICAL CONDITION, which will be released on April 15, they’ll get guns and blood and a stranger being shot on the front lawn of Dr. Shannon Frasier, which, throws a definite damper on the dinner party she’s throwing. And that, Mabry says “is only the first in a series of events that has her life teetering on the edge of chaos.” Then the teeter becomes, as Mabry describes it, “a plunge into the abyss” when Shannon starts receiving phone calls from a person with a guttural voice who wants to know what the stranger said before he died and won’t accept that she doesn’t know. He’s coming for her and Shannon’s not sure the police on the case can be trusted. Her only hope of escape—for herself and those she loves—is to overcome her buried past.

“I took a number of situations with which I was familiar, either through personal experience or that of friends or family, and combined them, then I stuck my protagonist in the middle of this mess and watched as she worked her way through her ordeal,” Mabry says.

And that, folks, makes CRITICAL CONDITION a page-turner, and far, far cry from “Corticosteroids in Otolaryngology: Intraturbinal Injection.”

Why the change? That’s easy. You see, this isn’t the Richard L. Mabry who spent thirty-six years as a practicing physician, the last ten as a professor at the University of Texas Southwestern Medical School, and who either wrote or edited eight textbooks and published more than one-hundred papers in scientific journals. Oh no, no, no. This is the Richard L Mabry who retired from medicine and, beginning with CODE BLUE in 2009, has written several novels, which he categorizes as being “medical suspense with heart.”

Even though he says suspense is his “main genre,” Mabry admits that “it’s hard for me to categorize my writing.” He offers that “in suspense there’s a gradual revelation of information” while “in a thriller, the protagonist is in danger from the outset” and “a mystery involves tracking down the truth.”

“Using those definitions, my books tend to fall into all three categories at once,” he concludes.

But it’s a tad more complicated given that his works have also been hailed as romances—“there’s enough romance in it to make it interesting, but not so much that male readers stop reading.”

Not bad for a man who had “no intention of trying my hand at non-medical writing.”  That all changed, however, in 1999 when his wife of forty years died and he began “journaling as a coping mechanism.” Eventually he decided he wanted to share what he’d learned from his loss. He took excerpts from his journals as the basis for a book, THE TENDER SCAR; LIFE AFTER THE DEATH OF A SPOUSE, which was published in 2006.

Then James Scott Bell stepped in and encouraged him to try his hand at fiction.“It was a challenge, so I accepted it, and four years later, after four books that garnered forty rejections, I got my first contract for a novel of medical suspense,” Mabry says.

But he nearly didn’t make it. ”Early in my writing journey, an editor suggested I read Leif Enger’s PEACE LIKE A RIVER to get an idea of what good writing was like,” he recalls. “I read it and almost gave up, knowing that I could never match something like that.”

Still he persevered, a living example of what he sees of the lesson to be gained from CRITICAL CONDITION, namely that “we never know the things of which we’re capable until we’re tested.”

And he had help from some good teachers along the way. Bell, for example, taught him “how to keep my readers guessing until the knockout ending.” Other mentors Mabry encountered through reading. “From the late Robert B. Parker, I learned to write short chapters and simple, declarative sentences,” he says. “From Lawrence Block, I learned how to keep a reader turning pages. From the late Donald Westlake I learned how to make my characters real.”

He also learned something else, this from personal experience.

“Early in my writing, I tried incorporating an overt religious message, but it didn’t come across as genuine.” Mabry, a “follower of Jesus for six decades” and a past Vice-President of the American Christian Fiction Writers, says “What I’ve learned to do is write realistically from a Christian worldview. Christianity is not a ‘get out of jail free’ card for the problems that beset all of us. The way we handle our problems, however, is influenced by our relationship with God.” He adds that his readers apparently agree with his chosen perspective, “even the non-Christians among them.”

In CRITICAL CONDITION, as in past novels, many of the theological questions appear in a Reader’s Guide at the end of the book. “It’s primarily there because a number of book clubs choose to discuss these novels, but I also see it as a viable way to stimulate readers to think about some of the deeper meanings of the novels,” Mabry says.

But there’s much to be done before Mabry reaches that end point. “I start with a premise, then figure out a beginning and end, and finally populate the novel and write the first ten thousand words,” he says. “From there, usually the characters take over and show me where to go. The late Donald Westlake called this ‘push fiction,’ and said that if he didn’t know what was going to happen next, neither could the reader.”

Which may explain, in part, why Mabry sometimes comes into conflict with his characters. “Actually, I have had to browbeat a character or two, but I’ve finally learned that I’m in charge,” Mabry confesses. “In one instance, I realized a character I really liked had to die. It was hard to write that scene, but it was necessary for the plot to move forward. As one writer friend of mine put it, ‘I didn’t kill him. I found him dead.’”

Add to this Mabry’s observation that “all my works are freestanding—that is, they don’t feature the same characters” and things might not bode well for Shannon Frasier, his protagonist in CRITICAL CONDITION, and his current favorite. “Because of the way I chose some of the stressful situations for her, I had to identify with her a bit,” he says, although he concedes that “there’s a little bit of me in every one of my novels . . . I’ll leave it to my readers to decide where it appears.”

With CRITICAL CONDITION completed. Mabry, a dyed-deep Texan, has returned to his small home office with its “full but organized desk” to work on DEAD ON ARRIVAL, his next novel. “It begins in an emergency room when a man arrives with his critically-wounded brother, brandishes a gun and says, ‘Doc, save him or everyone in here dies,’” he reveals. “I’ve completed the writing, and am about halfway through the second edit.”

Which means he’s already shared it with his wife Kay—“God has blessed me once more with the love of a wonderful woman,” he exudes—who he married thirteen years ago. “My wife is my biggest fan and my severest critic,” Mabry says. “She is my first reader, and she reads through a manuscript in two stages. She reads my first few chapters to see if the premise and direction of the novel holds water. Then she reads the completed work. And she can be quite tough on me, especially if I have a female character saying or doing something that isn’t right.”

If the work in progress has passed muster with Kay, then Mabry who owns up to being “very linear and goal-directed” might take some time to enjoy a little more golf and a lot more baseball. Especially baseball. A die-hard Texas Rangers fan who had a short stint as a semi-pro player, Mabry dreams of “seeing a baseball game in every major league stadium in both leagues,” and proudly proclaims “I’m well over halfway there.”

And he might even do a little extra indulging in his guilty pleasure—biscuits and gravy for breakfast.

Hey, come on—give the guy a break.  He’s retired from medicine and besides he was an otolaryngologist, not a cardiologist.

Dr. Richard Mabry is a retired physician and the author of six published novels of medical suspense. His books have been finalists in competitions including the Carol Award and Romantic Times’ Inspirational Book of the Year. His novel, Lethal Remedy, won a 2012 Selah Award. His medical thrillers, have garnered rave reviews from Library Journal and Publisher’s Weekly, as well as thousands of readers.