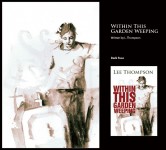 People have their own hidden worlds inside them as young Red Piccirilli has learned through the tragic events of his past.

His parents try to protect him by moving the family to a dead-end road out of town, but their plan is short-lived when a mysterious old man who seems to have a history with Red’s mother comes knocking at their door.

Red is quickly thrust into a crossroads between worlds, where he will soon learn from a broken god how to harness his true power…

WITHIN THIS GARDEN WEEPING is available from Amazon and Darkfuse.

“Lee Thompson knows his horror-noir. He fuses both genres together in the turmoil of terror, tragedy, blood, guilt, and lost chances at redemption.”–Tom Piccirilli, author of THE LAST KIND WORDS

Since early 2010 Lee Thompson has sold three novels and seven novellas to Delirium Books. His fiction has been described by the NY Times (not really) as Alfred Hitchcock directing the Twilight Zone. Or maybe it was the Twilight Zone directing Alfred Hitchcock. Either way, he’s short and fat and happy. You can visit his website but don’t be a stalker: http://leethompsonfiction.com

Dead of Winter by Lee Weeks