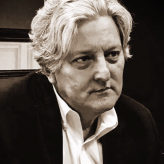 James Ziskin is the author of the Ellie Stone mysteries, Styx & Stone (October 2013) and No Stone Unturned (June 2014), both from Seventh Street Books. A linguist by training, he studied Romance languages and literature at the University of Pennsylvania. After completing his graduate degree, he worked in New York as a photo-news producer and writer, and then as Director of NYU’s Casa Italiana Zerilli-Marimò. He has since spent fifteen years in the Hollywood post production industry, running large international operations in the subtitling/localization and visual effects fields. The next Ellie Stone mystery, Stone Cold Dead, is due in the summer of 2015. Visit James at: www.JamesWZiskin.com

Between the Lines: John Lescroart

Finding the Echoes of Betrayal By James Ziskin Themes of betrayal, dishonesty, and infidelity are…

No One Knows by J.T. Ellison

By James W. Ziskin James Grippando has been thrilling fans since his debut Jack Swyteck…

The Secret Life of Anna Blanc by Jennifer Kincheloe

The Guise of Another by Allen Eskens

By James W. Ziskin Allen Eskens’ debut novel, The Life We Bury, was a breakout…

By James W. Ziskin The publishing world is often romanticized, sometimes ridiculed, and, like any…

Don’t Look Back by Gregg Hurwitz

The Black Hour by Lori Rader-Day

By James W. Ziskin Imagine being shot at point-blank range in a darkened hallway by…