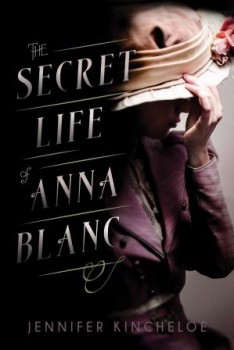 THE SECRET LIFE OF ANNA BLANC, Jennifer Kincheloe’s smart, irresistible debut mystery, is a fun romp through 1907 Los Angeles in the company of one of the most infectiously likable heroines you’ll meet all year. Anna Blanc is a poor little rich girl, sheltered to the point of captivity by her domineering father. She craves adventure, is fascinated by detective work, and–oh, yes–is most eager to be ravished by her husband-to-be. But when she discovers a string of murders in the seedy brothels of Los Angeles, the irrepressible Anna risks everything–her comfortable life, her impending marriage, and her reputation–to solve the crimes.

THE SECRET LIFE OF ANNA BLANC is a delightful madcap frolic and an addictive read. Both hilarious and tragic, it’s an unusual mix that succeeds to perfection. That’s hard to pull off. Tell us how you balance comedy and tragedy in one story.

Gee, thanks! Much of the comedy is Anna’s internal dialogue and how she reacts to things. So just staying true to her as a character really helps. Our own lives are both ridiculous and tragic. I was trying to capture both of those aspects of 1907 Los Angeles. After reading a draft, my agent suggested that I make the crimes worse and tone down some of the farce that was external to Anna. Her instincts were absolutely right. There is one scene that is so dark, I cringe that I wrote it.

You’re a research scientist with a PhD. I have to ask you about the rich historical detail in your book. Everything from period clothing to police stations to city planning and language. It’s all so authentic. How do you go about gathering the information to build such a realistic backdrop? And how do you restrain yourself from overdoing it?

Being an expert in one thing—public health research—makes me hyper aware that I wasn’t trained as a historian. As a result, I probably over-researched the book to boost my confidence. I read fiction from the period to harvest the slang and mores. I read memoirs, eyewitness accounts, sermons, books about politics written during the period. I studied maps. I watched film footage from the 1900’s—street scenes, mostly, and old movies that my character would have seen. I listened to 1900’s music. I looked at the art. I watched videos of animal dances, which Anna would have done. I called museum curators. I would sit and read old L.A. newspapers for hours, and got many of my story ideas from there. I looked at thousands of pictures of old Los Angeles, Central Station, Bunker Hill, the clothes Anna would have worn. I even had a historian who specializes in L.A. prostitution in the 1900’s read the book cover to cover—Annemarie Kooistra. She was great, and I approached her cold. Anytime I needed help, she’d answer my question. One thing I couldn’t get was access to LAPD archives. You literally have to get permission from the chief of police.

Speaking of the city, the Los Angeles of 1907 that you paint is unrecognizable to those who know it today. What surprised you most about turn-of-the-century LA? What would surprise readers most?

I had a lot of sympathy for the cops. They worked seven days a week for as many hours as they were needed. They got sixteen days off each year. In 1909, a labor union applied to the police commission to get cops one day off per week, and the police chief said no. I thought, “What a crappy boss.” Whenever L.A. got a new mayor, he would fire all of the cops who weren’t in his political party, so there was no job security. And they were forced to carry out whatever corruption scheme the higher ups had going on at the time.

Alice Stebbins Wells. Tell us how you found her and why she inspired you.

Alice was a police matron with the LAPD. In 1910, she became the first woman police officer in L.A. I ran across a short article about her on the Internet, and she intrigued me. I thought she must have been very brave, so I wrote the book in her honor, just for fun. But Alice was mature, sober, civic-minded. In other words, nothing like Anna Blanc.

Can you tell us how you sold this book? Our readers are always interested in success stories.

THE SECRET LIFE OF ANNA BLANC was in a contest, and they posted the first chapter on the Internet. Elizabeth Bonsor at The Blair Partnership (TBP) agency stumbled upon it and liked it. She didn’t have my contact information so she messaged me on Linked-In. I ignored her invitation because I didn’t know who she was, but it kept showing up in my email. I finally read her message, and it said she wanted to talk to me about my writing. I contacted her. It was so exciting, I didn’t sleep for weeks. They’re in England so we would talk on the phone in the middle of the night. Liz, Zoe King, and Neil Blair of TBP teamed up and convinced me to turn down my first publishing offer. Passing on that was scary. But, a few months later, we got an offer from Seventh Street Books. They were a great fit, and it’s been a fantastic experience. Seventh Street Books works hard for their authors.

Anna Blanc is a feminist avant la lettre, and she doesn’t even realize it. You address modern women’s issues with great care in this book, without letting a modern-day mindset break the historical spell you’ve cast. Was that a challenge to manage?

Yes. I didn’t want Anna to have the awareness of a 21st century woman. I wanted her to be a product of her culture in ways we would view as negative today. For example, she thinks she should be doing what she’s told, but she just can’t manage it. That’s different from being a woman who believes she’s a free agent and defies male authority because she’s enlightened. Anna gets there, but at first, she does what she wants because she can’t help it. It’s what her heart is telling her to do. I hope the book portrays the plight of women at the time, and how women at both ends of the social spectrum were, in effect, sold to men.

I’ve saved the best for last. Now we come to Anna herself. She’s eccentric, unmanageable, genuine, smart, and resourceful. And she’s adorable. Where did you find her?

When I wrote her, she just somersaulted off my fingertips. Then, when I looked back, I discovered she’s a lot like the person I was when I was 19, just more so. I think I unconsciously took that woman—my younger self, and blew her up. Anna’s very self-absorbed, not very self-aware, and because of this, she leaves a minor wake of destruction behind her. But she’s brave, transparent, and totally sincere. I think I was a little like that many, many moons ago.

Anna is French. Or at least her father is. And you’ve used Old World conservatism to trap Anna in her father’s cage. Tell us about her French Catholic upbringing and how that complicates her ambitions.

In Mr. Blanc’s day, American young ladies enjoyed more freedoms than their European counterparts. Henry James taught me that. Anna definitely suffers for it. To make matters worse, poor Anna was spanked by nuns. Her morality is driven by a desire to avoid punishment. She has to hurdle tremendous guilt to do the things she does. My dad was Polish Catholic, and I went to Catholic school, but I had a much better experience than Anna.

Your book has a bit of the feel of an old-fashion movie serial. Anna seems ripe for a new adventure. What can we expect from her next?

I’m excited about this. It’s set in LA’s Chinatown. I read in the 1908 Los Angeles Herald a true story about two beautiful Chinese slave girls who were stolen from their master—the leader of a Chinese gang, or tong, in San Francisco. He believed that another tong had taken the girls to Los Angeles. He offered a $1,000 reward for their return. The Los Angeles Police Department, our heroes in blue, were hunting the slave girls to return them to their master so they could collect the reward and avert a tong war.

I thought that was so shocking, that I had to write about it. 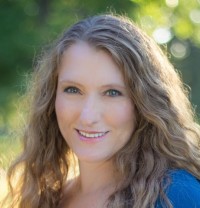 Jennifer Kincheloe (Denver, CO) is the winner of the 2013 Colorado Gold contest for unpublished writers in the mystery category and was a semifinalist for the Amazon Breakthrough Novel Award. She is the principal of KincheloeHealth, a health consulting firm, and was formerly a member of the research faculty for the UCLA Center for Health Policy Research.