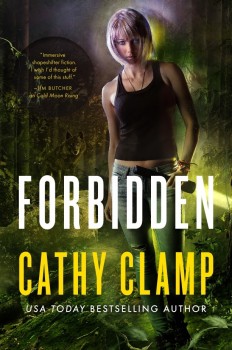 At the age of twelve, Claire Evans, along with dozens of other children, was kidnapped and held by a madman. To her horror, she discovered that shapeshifters, known as Sazi, existed in our real world, and her captor intended to make her one. He succeeded.

Now an adult and a newly minted agent for the Sazi law enforcement branch, Wolven, Evans has been sent undercover to secluded Luna Lake, Washington to investigate what her superiors believe is another series of kidnappings. Will local wolf Alek Siska be a help or a major distraction to her goal?

For The Big Thrill this month, author Cathy Clamp discusses FORBIDDEN, the first book in her new spin-off series.

This is the first book of a new series, but it’s in the same world as the USA Today bestselling Tales of the Sazi series. Would a new reader have to have read the previous books to understand this one?

Not at all. While FORBIDDEN starts at a point a decade after the events of the eighth book in the original series, Serpent Moon, the ending of that book was the equivalent of an apocalypse in the reality. The characters in this new book were children when the prior events took place, so they grew up in an entirely different world than the previous group of people.

Help readers catch up by telling us a little about what has changed in this fictional world.

There were two attacks against the Sazi hierarchy over the course of the original series. One attack was a direct one, where a group of snake shifters (cobras, rattlesnakes and other vipers) attacked the other shifters, attempting to become the only shifting species on earth. But the other, more devastating attack, came from within. Some family members who were human, who never became shifters, came to fear and hate their shifting family and created a chemical cocktail that “cured” shifting. But like many other drugs, there were side effects. Some shifters went rogue—insane to the point that they were feral wild animals and had to be put down. Others lost the ability to heal or were maimed. It became a plague instead of a cure. Luna Lake was a refugee camp for shifters, a place to band together those who survived. Many of the children were orphans and were raised in group homes by foster families. Much of Luna Lake is composed of “after plague” parents and siblings. The plot of the book is that there’s a threat to that last bastion of stability.

Many contemporary thriller readers have begun turning to urban fantasy as a source of great action and roller coaster plots. You’ve made a name for yourself writing fast-paced reads, and have great quotes from some of the biggest names in the genre. Is this book along the same lines as prior books?

Being a thriller reader my whole life, I tend to write non-stop action and world-ending tension—just with a paranormal twist. In fact, my editor usually has to make me slow down the plot and give the characters a chance to eat and sleep. I’m pretty hard on my characters.

The fires in Washington came at just about the same time as the release of this book. Will it affect future books?

That’s actually something my editor and I are trying to decide right now. While it’s an alternate reality, my goal is to make the reality as close to ours as possible. I have been closely watching the news from Republic, Washington, which is the nearest town to where Luna Lake would exist, and my hoped-for trip to the area during WorldCon in Spokane had to be cancelled. But for now, the fires haven’t breached the containment, and as I’m writing this, Republic seems to be safe, so it might become a non-issue for the series.

Most authors research while writing. Did you discover anything interesting while researching that affected the book?

Where the book is set was a big part of research. I had to find a place that was remote and that could contain many of the species of animals I wanted to live there. It’s getting harder to find places to put shapeshifters where they can not interact with humanity for years on end. I also found a reason why the Sazi already owned that particular piece of land. It doesn’t come up in this book, so I don’t want to give spoilers, but the town itself is a sort of character.

Will the second book also follow Claire and Alek?

No, although they’ll be secondary characters in the next book, Illicit. The focus of the second book will be on a woman named Rachel Washington, who was imprisoned in the same camp as Claire and became a Great Horned Owl shifter. Each of the first three books of the series focuses on a different heroine who was turned into a shifter against their will. They were all human children with no knowledge of the shifting world, so them finding their place in the world, as new adults, will play a large part of their story.

Is there anywhere readers can get a signed copy of FORBIDDEN?

Absolutely! While the primary signing tour has completed, I did sign stock at several stores. You can contact the Barnes & Noble in Harker Heights, Texas and the Hastings store in Stephenville, Texas—they should still have some signed copies left. I may also be doing some more signings before the end of the year, but I don’t have the locations set yet.

Anything else you’d like readers to know about this book or other things coming up?

Mostly that I tried to write this new series so it would both satisfy readers of the original series by giving answers to some of the plot threads left hanging when the series ended, while also creating a world that new readers can come to love. I’m also pleased that the first book of the original series, Hunter’s Moon, will be released as a tenth anniversary special edition this month. It’s been out of print for some time, so people who enjoy FORBIDDEN can find out how the world began. I will also be releasing a novella as part of a “blue collar” romance collection this month called Hunks, Hammers and Happily Ever Afters. 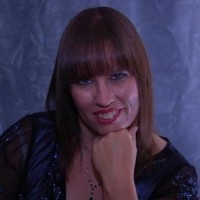 Cathy Clamp is an award winning USA Today bestselling of over 20 urban fantasy and paranormal novels for Tor Books, as well as a number of short stories in anthologies and collections. She was also, until recently, one half of the co-author team of Cat Adams. She lives in the beautiful Texas hill country with her husband, where she also raises goats and works in a law office.