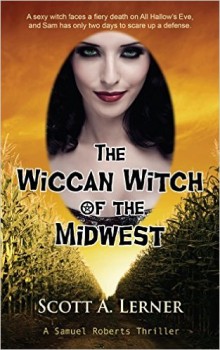 “I generally research as I write,” he says. “When it comes to witches and wiccans, their beliefs tend to vary from coven to coven, and even witch to witch. In some ways I combine different philosophies from different times and cultures. I hope I get it all right, but I am sure someone will let me know if I don’t. When it comes to beliefs people hold sacred, they tend to be vocal when I screw up, so I do my best not to.”

But, with this being the third book in the series, keeping the ideas fresh can be difficult, he admits.

“After all, there is not a limitless supply of creatures that go bump in the night. I try and stay ‘fresh’ by allowing my characters to evolve. Sam is very different than he was in Cocaine Zombies. Sam is no longer a reluctant hero, but a man on a mission. The characters are beginning to accept what would have been impossible for them to cope with only a few books back.”

So, if research doesn’t scare Lerner, what does? “I am not as brave as Sam,” he confesses. “A lot of things scare me. My son just got his license, so driving with him is terrifying. I am also not a big fan of demons, mummies, voodoo spirts and the like. At least, I am not a fan of being at odds with them. However, I love to read about them.”

Reading, as well as writing, are loves that keep Lerner’s words flowing. “…There is a dream scene [in THE WICCAN WITCH OF THE MIDWEST] that I really liked writing. Sam dreams he is in a supermarket. The song ‘Lost in Supermarket’ (by the Clash) is playing in the background as Sam wanders through a very freaky grocery [store]. He must try and pull meaning out of seemingly random events.”

The spookiness of the paranormal genre seems to have a place in Lerner’s heart, as well as in his books. He collects creepy antiques as a hobby and prefers to read, “a good scary book,” but doesn’t feel any of those books necessarily influence his writing. “I was thinking of saying Falkner and Gustave Flaubert [were influential] so people would thing I am smart,” he says. “Yet, to be honest no one comes to mind. There are authors I really like, but I don’t think they have really had an impact on my writing.”

Lerner’s journey from lawyer to novelist was not as big of a jump as you might think.

“I have been told by a lot of people that lawyers work closely with the forces of darkness,” he says. “Besides, as an attorney I spend a lot of time writing and researching cases. [It’s] not all that different than being an author. In fact, my first published writing was articles for the Illinois Bar Journal.”

Up next for the novelist is a book currently titled, House of Pain, which will be the fourth book of the Samuel Roberts paranormal thrillers. “Sam and Bob are back along with some new friends for a new creepy adventure,” Lerner says. “Think of a haunted house filled with dark magic. I am also working on a book about killer rabbits tentatively titled, “Bunny Blood Lust,” or “Hells Hoppers,” about cotton-tailed killers with a taste for blood.”

Author and attorney Scott A. Lerner resides in Champaign, Illinois. He obtained his undergraduate degree in psychology from the University of Wisconsin in Madison and went on to obtain his Juris Doctor degree from the University of Illinois in Urbana Champaign. He is currently a sole practitioner in Champaign, Illinois. The majority of his law practice focuses on the fields of criminal law and family law.

Mr. Lerner lives with his wife, their two children, and their cat Fern. Lerner collects unusual antiques and enjoys gardening, traveling, reading fiction, and going to the movies.

Lerner’s first novel and the first Samuel Roberts Thriller, Cocaine Zombies, won a bronze medal in the mystery/cozy/noir category of the 2013 Independent Publisher (IPPY) Awards. The second and third books in the series are Ruler of Demons and The Fraternity of the Soul Eater.