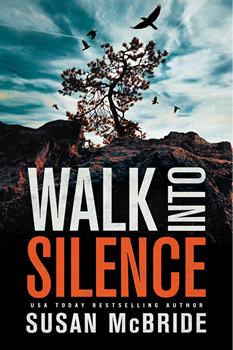 “WALK INTO SILENCE is the debut in a series featuring Texas police detective Jo Larsen,” says thriller writer Susan McBride. “I wrote it almost a decade ago, but put it aside. I was deep in the midst of my Debutante Dropout Mysteries for HarperCollins at the time, and had also signed with Random House to do a non-mystery series about debutantes in Texas. So I forgot about WALK INTO SILENCE until last spring, when I dusted it off and did a major rewrite. A lot had changed in ten years, particularly regarding technology, but the plot felt pretty timeless: a missing woman with a tragic past and a detective determined to find her.”

“Jo Larsen is kind of my own Jack Reacher without the military background and the penchant for drifting,” McBride goes on to add. “She’s had a lot of bad things happen in her life, but she hasn’t let them destroy her. They’ve made her incredibly strong and empathetic. She truly feels for the victims and fights for them, because no one fought for her. I love that she’s very controlled on the outside, but roiling with emotion on the inside. Those who know her well—and there are few—understand her need for privacy but keep knocking on the door, asking to be let in. When she believes something, she believes it fiercely, which is why the term ‘dogged’ comes up so often when other characters in the book address her. She is like a dog with a bone: she won’t let go.”

As with any thriller, research and accuracy can be a key component to the book’s success and authenticity.

“I definitely do a lot of Internet research, and I kind of go wherever Google takes me when I have a particular question come up. While researching WALK INTO SILENCE, I needed to know about quarries and what happened to them when they weren’t viable anymore. What does one do with a gigantic pit? I also looked up various laws relating to missing persons, gun ownership, et cetera. Since the book is set in Texas, and I don’t live there any more (although I did for twenty years), I checked back on locations and directions. But I do love hands-on research as well and returned to the Dallas area to talk to folks at the Frisco police department and get a tour of the facilities. I put my notes to good use when I set up my fictional Plainfield P.D. So I do whatever it takes in order to feel like I’m getting things right.”

Even with research and craft, a writer can still have favorite scenes in each of their books.

“There are a couple of scenes in the book that really stuck with me,” McBride continues, “mostly because of the visual and visceral elements involved. One has to do with a ploy twist that affects Jo Larsen personally when she arrives back at her place in the middle of the night during the investigation. Another is the ending. I can read it now, and it still makes me want to cry.”

McBride’s love of story and thrillers dates back to her childhood where she grew to love mysteries.

“I’ll go all the way back and say that being a Nancy Drew fan in my childhood influenced me as a mystery author,” McBride says. “I still have my full set of yellow-spine books, which I can’t wait to pass down to my daughter (she’s four, but already a fierce reader). My addiction to plots with puzzles definitely started there and continued into my adulthood. Like so many others, I got hooked on Sue Grafton’s Kinsey Milhone series, and then Michael Connelly’s Harry Bosch, Patricia Cornwell’s Kay Scarpetta, Sara Paretsky’s V. I. Warshawski, and so foth. Beyond mysteries, my tastes are kind of eclectic and include authors like Sarah Addison Allen, Mark Salzman (whose Lying Awake is one of my all-time favorites), Margot Livesey (ditto, Eva Moves the Furniture). Every time I read a book that sucks me in and/or resonates with me emotionally, it makes me want to try harder, to go somewhere I haven’t gone before in my work, and just be a better writer.”

Aside from writing and being a mother, McBride also dabbles in collecting antiques and crafting.

“I’ve always been a big junker and love hitting yard sales, estate sales, and antique malls, looking for treasures, although I haven’t had as much time for that with a preschooler at home. So, these days, my hobbies mostly revolve around whatever my daughter’s into.  We do a lot of arts and crafts, like painting, sticky mosaics, whatever. We take walks, look for bugs and leaves, visit the zoo and science center, read, and do a ton of jigsaw puzzles. I’m kind of getting a second childhood right now because of Emily, and it’s awesome.”

Fans of McBride’s novels needn’t worry about her becoming distracted, however, more books are on the way.

“I’m working hard on the fourth River Road Mystery for HarperCollins, Come Helen High Water, which will be out in June 2017, and I’ll begin a second Jo Larsen book as soon as I’m done with Helen. No rest for the wicked, eh?  Or at least, no rest for book-writing Mommies.” 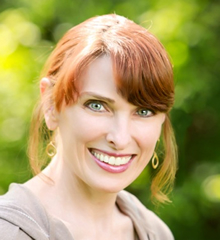 Susan McBride is the USA Today Bestselling author of Blue Blood and the Lefty Award-winning, Anthony Award-nominated Debutante Dropout Mysteries from HarperCollins/Avon, including The Good Girl’s Guide to Murder, The Lone Star Lonely Hearts Club, Night Of The Living Deb, Too Pretty To Die, and Say Yes to the Death. Susan has a second bestselling series with HC/Avon that debuted in May 2014, the River Road Mysteries, that include To Helen Back, Mad as Helen, and Not a Chance in Helen. A fourth installment, Come Helen High Water, will be out in 2017. A darker mystery featuring Texas police detective Jo Larsen, Walk Into Silence, will be out from Amazon’s Thomas & Mercer imprint on December 1, 2016.

For more information about Susan McBride, please visit her website.