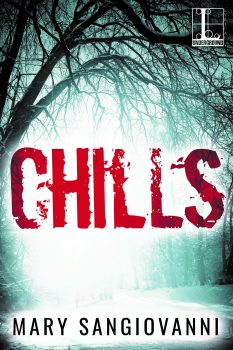 CHILLS begins with an unexpected snowstorm at the onset of summer, in a small town in Connecticut. Police detective Jack Glazier finds a body that appears to have been the focus of a ritual murder. As the snow continues to fall, isolating the town from the rest of the world, Glazier teams up with Kathy Ryan, an occult crime specialist. Together they must uncover the secret behind the sacrifices, or die trying.

“CHILLS itself is a standalone novel,” author Mary SanGiovanni says, “however, that being said, my plan is to use those characters—particularly Kathy Ryan—in other books in the future. Since a lot of my work crosses back and forth between thriller and supernatural horror, a specialist in the occult could appear in future books of either type.”

SanGiovanni, with a dozen horror and thrillers publications under her belt, treats the occult, and all that surrounds it, as a treasure-trove of inspiration.

“I think occult spirituality and religions are a great gray area for writers, because so much has been shrouded for centuries in mystery and the suggestion of the unknown. Many religions that fall under the occult speak of monsters as either a literal or figurative representation of evil, temptations, fears, and punishment. Therefore, the occult makes a pretty good backdrop for the kind of story CHILLS is.”

The trick to using the occult in fiction, SanGiovanni says, is in the use of factual details.

“To make the occult group and their practices in the book more believable, I provided a mix of truth and credible fiction, things people have heard of or think they’ve heard of. Part of it was consistency: religions that deal in the supernatural believe strongly in an order or logic to how the supernatural works. I think any fictional occult religion needs to have its own consistent internal logic, certain immutable tenets around which all else is created.”

SanGiovanni adds that “authenticity in the factual elements of the occult involved a little research beyond my own understanding of such faiths.  Many religions, including occult types of faiths, have specific texts that are used as reference for both summoning and banishing spiritual entities, which is a major aspect of CHILLS. Many of the books mentioned in CHILLS are actual historical texts regarding demonology and the occult. Others are references to deities or texts I’ve mentioned in my other books. Familiarity gets into the subconscious, and people tend to believe what they think they know as much as what they’re sure they know.”

She interweaves rites and rituals into her novel, and marvels at the commonality in different practices.  “What I find interesting is the amount of overlap despite the fact that these practices span millennia and geographical distances too great for cross-influence. The ritual in CHILLS is very much taken from those common practices by various religions for protecting, summoning, banishing, and communicating with entities from other realms. This includes the items used in these rituals as well.”

Terrified yet? Despite being well versed in all things involving the occult, SanGiovanni also enjoys the excitement of writing a thriller.  “One of my favorite scenes is the car scene. It’s a minor personal fear of mine and was the most fun to write. Plus, I think many people can relate to that kind of helplessness, and the potential terror in that situation. Many of my favorite scenes are the ones out in the snow, or in a shelter which is quickly being lost to the elements.”

A fan of Stephen King, Ramsey Campbell, Gary Braunbeck, Sarah Langan, and John Sanford, SanGiovanni also mentions writer/director John Carpenter as an influence to her work, and specific to CHILLS, Nic Pizzolatto. But SanGiovanni isn’t all darkness all the time—she’s actually a Green Thumb who also enjoys crafts and video games.

“I have a garden,” she says, “I love raising vegetables. I’m also into herbalism. It’s all part of a nature-driven world view.  I also like to hand-sew things like pillows. Most people who know me are surprised by my more domestic, normal hobbies.”

Fans of SanGiovanni’s brand of horror and thrillers will be pleased to here she has another in the works.  “Currently, I’m finishing up another novel for Kensington/Lyrical, a supernatural thriller about the Pine Barrens. After that, I have an apocalyptic novella and a collection of short fiction.”

For more information about Mary SanGiovanni, and CHILLS, visit her website. 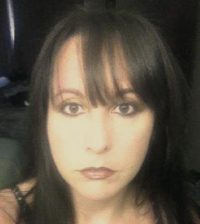 Mary SanGiovanni is the author of the THE HOLLOWER trilogy (the first of which was nominated for the Bram Stoker Award), THRALL, CHAOS, and the forthcoming (tentatively titled) THE ELEMENTAL, and the novellas FOR EMMY, POSSESSING AMY, THE FADING PLACE, and NO SONGS FOR THE STARS, as well as the collections UNDER COVER OF NIGHT and A DARKLING PLAIN. Her fiction has appeared in periodicals and anthologies for the last decade. She has a Masters degree in Writing Popular Fiction from Seton Hill University, Pittsburgh, where she studied under genre greats. She is currently a member of The Authors Guild, The International Thriller Writers, and Penn Writers, and was previously an Active member in the Horror Writers Association.

Get It Right: Bryan E. Robinson