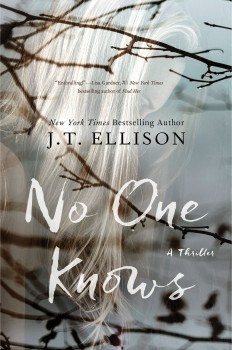 New York Times best-selling author J. T. Ellison is known for her two addictive suspense series, one featuring Lieutenant Taylor Jackson, and the other Dr. Samantha Owens. Her latest novel, NO ONE KNOWS, is a dark standalone that takes a deep dive into the troubled soul of a young widow. Aubrey Hamilton’s husband vanished five years earlier and has just been declared legally dead. That judgment clears the way for a huge insurance payoff. And then things start to happen.

Recently, I had the chance to talk to J. T. Ellison about her latest book.

In NO ONE KNOWS, you switch narrative point of view many times. From third person past omniscient to third person present, with every shade of idiosyncrasy in between. Can you discuss the challenges and rewards of multiple viewpoints?

It’s not something I usually do, which made it so much fun. I generally write it straight—the story is either close third, or first. But this one unfolded differently, and I realized that I loved the idea of telling the story through different characters’ eyes, and through different narratives at different points in time. It added to the element of misperception I was trying to create. Plus, I was really trying to stretch my writing wings with this book. Throw out the rulebook is my new mantra.

Nashville plays a dynamic role in this thriller. The reader can feel the love you have for your adopted home. The restaurants, the skyline, parks, bars, and coffee houses: you present a vivid sense of place. Talk to us about the locations you’ve used. Any personal favorites?

Thank you! Nashville is such a great city to write about. We’re constantly evolving, too, so in the years I was working on this book I kept having to change the names of the bars and restaurants I was using. I finally gave up and fudged them. The area where Aubrey lives is vibrant and exciting, with lots of students and young families mixing with older homes and condos and the Vanderbilt campus and hospital, so the vibe is very eclectic. I wanted to capture that sense of belonging to the old money of Nashville juxtaposed against the lifestyle of a young widow who used to have it all, and now is scraping by with two jobs and a lot of heartache. Nashville is a rich tapestry to draw from. Downtown, suburbs, the Gulch, east and west—no matter where you go there’s a microcosm of attitudes and restaurants and shops that fit the environs. I like them all!

You put your heroine, Aubrey Hamilton, through the wringer. She’s orphaned at a young age, and things only get worse after that. Yet she endures somehow. Has nine lives. Talk a little bit about resilience and the strength—or fragility—of the human mind in your books.

I love the idea of someone who seems completely normal on the surface hiding a different person inside. We all fake it, right? We all hide our true selves. Do we ever truly know someone? We can’t get into their head; we can only go by their words and deeds. The idea that someone can be outwardly handling a situation while slowly “decompensating” is a theme I tap into time and again. And I’m a sucker for that genteel Southern madness that slowly leaks out into the character’s world. There’s a gothic undertone that I hope comes out during the read.

Daisy Hamilton, Aubrey’s mother in law, is a fascinating character. She’s a social climber, overbearing mother, alcoholic schemer, and tenacious survivor. I loved her. Tell us where find you characters. Somewhere dark and disturbing?

Daisy came about from the phrase Daisy is as Daisy does. It was one of the first lines that came to me in the book, five years ago, when I initially drafted it. It fits her perfectly. Her name—it’s so delicate and Southern you’d never expect someone so sweetly named could be such a hateful creature. I’ve had a lot of input on Daisy—she was one of the hardest people to capture. Her narcissism and possessiveness color her every action, and it was incredible to peel back the layers and discover what made her who she is. She unfolded for me; I didn’t plan her or force her. Too much thinking, and her visceral nature would’ve disappeared.

You also paint some racy sex scenes in NO ONE KNOWS. Do they ever make you blush?

Oh, of course. It’s always fun to have your parents reading those scenes, too. I don’t write a lot of sex into my books, usually because it’s not appropriate to the story, but this one needed sex to explain the characters. I think sex on the page is one of the very best ways to find out who your character really is inside. It lays them bare, if you’ll forgive the pun.  Hopefully it enhances the read—I’m writing a thriller here, not erotica.

You’re known for your ever-twisting plot turns and dark suspense. I’m thinking of your bestselling thrillers, the Lieutenant Taylor Jackson series and the Dr. Samantha Owens medical examiner novels. You also co-author the bestselling Nicholas Drummond series with Catherine Coulter. What are the challenges of working with another author? And writing by yourself? Do you have a preference?

I love doing both. Catherine is amazing to work with—we’ve discovered two heads are better than one when it comes to the Drummond books. We have different styles, so I’ve learned a lot about storytelling from working with her. And then I slip back into my own head to write a Sam or a Taylor, and everything I’ve learned comes into play, and I have to decide how to approach the story. Catherine’s a more external writer than I am, which makes sense; she’s an extrovert. I’m an introvert; I dig spending a lot of time in my characters’ heads, seeing the story through their eyes.  It’s two different approaches to the page, and it’s helping me grow as a writer.

You’ve got a new Taylor Jackson novel, Field of Graves, coming out in June. NO ONE KNOWS, however, is your first standalone. Can we expect more domestic thrillers like this one?

I think so. I’m hooked. Of course, I hope to write a wide variety of stories and not lock myself into only one thing. I love doing the series because the worlds are already established, and you get to see how your character reacts to their environmental changes. I love standalones because you get to put everything out there—you must in order to make the story come alive. For my series, I know what’s going to happen to the characters several books ahead. The standalone gives such a broad canvas to draw from. I predict more of both in the future.

What’s next for J. T. Ellison after NO ONE KNOWS? Movies? Television?

Oddly enough, television, though perhaps not in the way you’re thinking. This year I started cohosting A Word on Words, a literary television show founded by the esteemed John Seigenthaler, for Nashville Public Television. Interviewing authors is incredibly fun—I get to pick their brains, talk about their books, and we shoot on location so Nashville is shown off as well. As far as my books, you know how it goes. We’ve been optioned before, but everything is expired right now. So should Hollywood come calling again, I’m all ears.

I always like to ask successful writers about the moment they felt they’d made it. For you, was it when you found your agent or landed your first publishing contract? Was it the New York Times bestseller list? Do tell.

A hard question. I like to celebrate all the things, but I don’t know that I feel like I’ve made it yet. I don’t know that I ever will. I’m not being coy, I promise, I simply don’t know that there’s a point in time when you get to rest on your laurels and pat yourself on the back when you’re a writer. I did hit a milestone last year—crossing the million books sold mark. That’s a lot for some, not a lot to others, but it made me feel like I may be doing something right. I hope there’s a lot ahead for me, and I’m content to write my brains out and see what comes.

You’re extraordinarily prolific. Can you share something of your writing routine with our readers?

I love that word, prolific. It means different things to different people. I’ve written 17 books in nine years, so that’s great, but I know people who write five books a year, and I look at my little list and am appropriately humbled. I try to write every day, five days a week, shooting for 1000 words a day. I took a productivity course this year, and it taught me I’m setting my bar too low. So this year I’m hoping to increase my output without sacrificing quality. Ultimately, each book takes its own sweet time: I’ve done one book in two months, another took ten months, and then there’s NO ONE KNOWS—that one was literally five years from start to sale. I firmly believe if you write consistently, you’ll build up the words, and words equal money. I gotta feed the kittens, you know?

Thanks so much for this—it was a lot of fun! 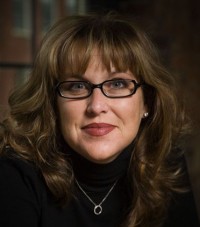 J.T. Ellison is the New York Times bestselling and award-winning author of fourteen critically acclaimed thrillers and is the co-author of the Nicholas Drummond series with #1 New York Times bestselling author Catherine Coulter. With over a million books in print, Ellison’s work has been published in twenty-five countries and thirteen languages. She is also the co-host of A Word on Words, Nashville’s premier literary TV series, which airs on Nashville Public Television. She lives with her husband and twin kittens in Nashville.