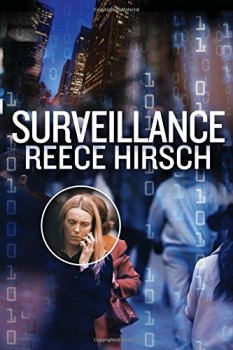 Use your shredder. Don’t save your credit card information in your online accounts. Never click on an unfamiliar attachment. And for goodness sakes, don’t provide your social security number or other financial info in response to an unsolicited email request.

If you’re not already following this sage advice from author and privacy attorney Reece Hirsch, chances are good you’ll beef up your online security after reading his latest thriller, SURVEILLANCE, the third book in his award-nominated Chris Bruen series.

For former computer-crimes prosecutor Chris Bruen, teaming up with the plucky hacktivist Zoey Doucet to open a San Francisco law firm seems like a great idea—until their first case. With their client on the run, two employees dead, and their own lives at stake, Bruen and Doucet go from defending an “ethical hacker” to evading a hired assassin, a bloodthirsty drug cartel, and their own government in an epic run for survival.

“It’s not always easy to strike the balance between action and character development because I think thriller readers generally have an expectation of a fast pace and quite a bit of action,” Hirsch says. “When I ran track in high school we used to do a very demanding workout called ‘intervals training,’ which involved sprinting a quarter mile and jogging an eighth, and repeating that again and again, with the pace steadily increasing.  I sometimes think that pacing in a thriller can be a little like that.”

No question SURVEILLANCE is a marathon of action-packed sprints that sometimes hit a little too close to home—you did fire up that shredder this morning, right?—but Hirsch doesn’t do so at the story, or characters’, expense.

Doucet’s “spiky attitude” is somewhat modeled after one of Hirsch’s friends, while the rest of her “checkered resume” was drawn from other acquaintances, creating a mash-up that Hirsch tweaks until the character comes to life.

“I wish that characters just came to me fully formed but it seldom happens that way,” Hirsch says.  “When I first sketch them out they’re like Frankenstein monsters, stitched together from the parts of people that I know.”

Kind of like the stories themselves. Hirsch admits that many of the topics his protagonists face in the Chris Bruen books are plucked from his real-life case files—including SURVEILLANCE, which was conceived after a client’s experience with “ransomware”—but he’s careful to stay away from scenarios that are too close to his work.

“That’s usually not too difficult because I tend to take a real-life issue, such as state-sponsored hacking, and use it as the springboard for a fairly heightened, action-packed story,” he says. “My life is much more boring than Chris Bruen’s.”

Which is also the reason he steers clear of courtroom drama—much to some of his readers’ dismay. Hirsch isn’t a litigator and has little to no experience in a court of law. Not that this detracts from the action on the page.

“I think there can be every bit as much drama found in advising a client that is experiencing a crisis, such as a catastrophic security breach, or negotiating a big merger transaction,” he says. “I enjoy writing those types of scenes because they’re less familiar to readers of the genre.”

Providing, perhaps, an opportunity for a lesson or two naïve Internet users might find invaluable—which, given today’s multimedia environment—isn’t as crazy as it sounds. Every day, Hirsch works with companies that have experienced security breaches of one sort or another, whether caused by a rogue employee or a Chinese hacker. This kind of cyber espionage happens more often than people think.

Despite that, Hirsch isn’t looking to deliver a sermon on cyber safety. If his series had a theme, it would boil down to something like: Objects are closer than they appear.

“By that I mean that the hyper-connectedness of the modern world threatens and encroaches on all of us—and we have to find ways to fight back against that encroachment,” he says. “Chris and Zoey fight back—very literally—in my books.”

Or rather, they have, up until now. With SURVEILLANCE out in the wild and racking up the praise, Hirsch has settled into a new manuscript that steps away from the Bruen and Doucet duo.

“The new book will once again deal with some cutting-edge technology issues.  However, the main character is a much darker figure than Bruen, so I will have to work harder to bring readers along on his journey,” he says, noting that the story is also based on real public figures and events. “In so many ways this new book is taking me out of my comfort zone—to the extent that I have a writing comfort zone—and that’s probably a good thing.” 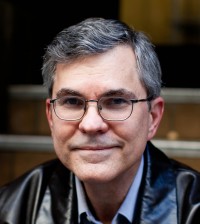 Reece Hirsch is the author of four thrillers that draw upon his background as a privacy attorney. His first book, The Insider, was a finalist for the 2011 International Thriller Writers Award for Best First Novel. His next three books, The Adversary, Intrusion, and Surveillance, all feature former Department of Justice cybercrimes prosecutor Chris Bruen. Hirsch is a partner in the San Francisco office of an international law firm and co-chair of its privacy and cybersecurity practice. He is also a member of the board of directors of The Valentino Achak Deng Foundation. He lives in the Bay Area with his wife and a small, unruly dog.

To learn more about Reece, please visit his website.