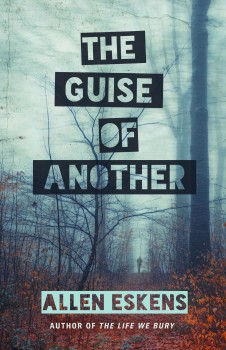 Allen Eskens’ debut novel, The Life We Bury, was a breakout hit for Seventh Street Books in 2014. His second novel, THE GUISE OF ANOTHER, releases October 6, 2015. I sat down with Allen to talk about his writing, his success, and THE GUISE OF ANOTHER.

First, congratulations on the success of The Life We Bury, which won the Rosebud Award at Left Coast Crime and was a finalist for the Edgar for Best First Novel and ThrillerFest Best First Novel. If that weren’t enough, Suspense Magazine and MysteryPeople named it one of the best books of 2014. And a starred review from Publishers Weekly and a movie option, all in less than a year. Tell us how you keep yourself grounded and in the saddle writing more books.

Thank you, Jim, for this interview and for the kind, congratulatory introduction. It has been a terrific year, no doubt, far exceeding my wildest dreams. For a while after The Life We Bury launched, it seemed like there was some new review or internet post every day that pulled at my attention. I didn’t have quite the discipline I’d hoped to have, but I have a multi-book deal and in order to remain on pace I’ve had to create discipline.

THE GUISE OF ANOTHER is a heart-pounding thriller, a game of cat and mouse between a cop and a ruthless assassin. The Life We Bury is more of a mystery. Are you moving in a new direction or will we see more of both from you?

My first two books are similar in some ways, but they do have clear differences. The Life We Bury is more character driven and has a stronger emphasis on literary writing. THE GUISE OF ANOTHER is more reliant on thriller elements and plot. This came about because after I completed The Life We Bury, I started the arduous process of seeking an agent. After the first couple weeks, I realized that agents weren’t clamoring to get me as a client, so I distracted myself by starting a second novel (THE GUISE OF ANOTHER). Because I didn’t have a readership, I decided to write something a bit different than The Life We Bury.

Before The Life We Bury hit the store shelves, I had submitted THE GUISE OF ANOTHER to Seventh Street Books and signed a three-book deal. I like playing with the spectrum of plot and character (and scene) and plan to keep adjusting those elements depending on what I think the story calls for.

THE GUISE OF ANOTHER features the Rupert brothers, Alexander and Max, both Minneapolis cops, who depend on each other despite their very different scruples. Without giving away any spoilers, can you talk about their relationship?

I have a great deal to say about that relationship, but it’s hard to say much of anything without tripping over a spoiler. I just want to tell people, “Hurry up and read the book so I can talk about it.” Suffice it to say, the brothers need each other, albeit for different reasons.

You do a remarkable job inserting high-tech gadgets and bleeding-edge technologies in your new book, both in the scenes from 2001 and present day. How do you research this stuff?

As a criminal defense attorney (my day job), I come in contact with the latest in investigative techniques. I also have friends and contacts who are top-of-the-line investigators who are very giving of their time and expertise. But sometimes it comes down to a Google search. It’s amazing what one can learn online.

The Minnesota wilderness figures prominently in both of your books. Its pull on Alexander Rupert is integral to the resolution of THE GUISE OF ANOTHER. Tell us about the role of place and home in your books.

I love the woods. I grew up in the Ozark Hills of Missouri and have a great affection for the lush forests of my adopted home state of Minnesota. Forests can be a place of great peace, or they can be a place of great isolation. Weather and atmosphere seem to be amplified in the woods as well, adding to how a scene feels to a character and therefore to the reader. I think, as a kid, I felt more comfortable sitting in a tree than in any building. Thus I tend to gravitate to the wilderness in my writing.

One of the most interesting characters in your latest book is Ianna Markova. She’s something of a throwback to the moll of old detective stories. How did you come up with her?

I wish I could say she’d a nod to the noir writers of the 1950s, but the inspiration for her came from a much earlier era (think Elizabethan). I can’t go into her origin any more without tripping over another spoiler, but I loved writing her character.

I have to ask about your titles. Mysterious and moody, almost poetic. Any stories to tell about how you name your books?

Now that you’ve had a year to digest your experience, what advice would you offer for first-time or aspiring authors?

Stories should have both an external plot (the adventure, mystery etc.) and an internal plot (the personal journey). I think that young writers, especially writers of mysteries and thrillers, focus too much on the external plot. I often look at action movies and their sequels and ask why was the original better than any sequel? Usually the answer is that the original had a personal story that was missing from the sequel. For example, in Die Hard we cared that the hero was trying to save his wife and his marriage. He had to kill a bunch of terrorists to do it, but the personal plot is more than a subplot. When I write, I view the external plot as the vehicle that I use to tell the personal story. It’s through the hero’s personal journey that a writer will reach the reader.

Joe Talbert was your immensely enjoyable protagonist in The Life We Bury. Will we see him again in the future? What about Max Rupert from THE GUISE OF ANOTHER? 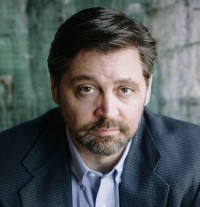 Allen Eskens is the author of THE LIFE WE BURY. He has been a criminal defense attorney for twenty years. He honed his creative writing skills through the MFA program at Minnesota State University as well as classes at the Iowa Summer Writing Festival and the Loft Literary Center in Minneapolis. He is a member of the Twin Cities Sisters in Crime.