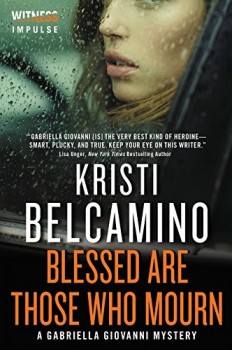 The first novel featuring cops’ reporter Gabriella Giovanni, Blessed Are The Dead, is nominated for both a Macavity and an Anthony Award. Now author Kristi Belcamino has brought Giovanni back for a fourth time in her latest release, BLESSED ARE THOSE WHO MOURN.

Although she’s in a happy relationship with Detective Sean Donovan, one that has given them their beloved daughter, Grace, Giovanni can’t let go of her traumatic past. When a string of young co-eds start to show up dead with suspicious Biblical verses left on their bodies—the same verses that the man she suspects kidnapped and murdered her sister twenty years ago had sent to her—Giovanni fears the killer is trying to send her a message.

It’s already a taut, fast-moving read. But when Grace’s life is threatened, the novel becomes a nerve-jangling hunt for her, with Giovanni increasingly terror-fueled in her desperate attempts to save her daughter.

A mother herself, Belcamino acknowledges that she is extremely fortunate that she has never had to deal with anything as serious as Giovanni has in her books, describing it as “absolutely the worst nightmare I can imagine.” She does however convey that visceral fear of motherhood under one of its most extreme challenges with great skill. At one point she has Giovanni musing that if anyone had told me that motherhood leads to this: your heart ripped to shreds while you are willing to beg the devil to take your soul in exchange for the safety of your child—if I had been magically given a glimpse of my life right now by the Ghost of the Future, I would’ve said, “Fuck that.”

But as a newspaper reporter covering crime, Belcamino has spent time growing close to parents who have lost their children in the most horrendous ways imaginable. She alludes to the tragic case of Xiana Fairchild, a little girl who was kidnapped and murdered. Belcamino maintains a friendship with Xiana’s family to this day, and believes she lost a lot of objectivity writing those very difficult stories.

Yet she is keen to stress that objectivity is not necessarily what a reporter should be striving for. “I think people assume reporters are always objective, which is impossible. What we are is fair. For instance, if I’m writing about two issues and have a strong feeling about one side, I am extremely careful in making sure I show both sides of the issue. Once when I was writing about a police union dispute with the city, I measured how many inches of type I gave the union and the city so it was equal.” Her conclusion is wryly amusing, like so many of Giovanni’s views: “Of course, I still ticked off both sides anyway, simply by writing about it at all. That might be the answer—If both sides hate your article, it’s fair?”

And fairness is something that really matters to Belcamino, something that she sees being undermined with the insatiable appetite for immediate news. “In what I call ‘the good old days’ of newspaper you had at least until that night’s deadline to get your information correct. Now, an editor wants something online immediately. With that said, any real newspaper will make sure the information is correct and won’t ask a reporter to be unethical to get it up online first.

“For instance, this week at work, a sixteen-year-old boy was shot and killed while he attempted to rob a man on the street. We had the name of the teen. We knew everything about him, but the morgue hadn’t officially released his name and we couldn’t reach his family to confirm his identity so we held off on naming him in the story. Any good newspaper or media outlet will err on the side of caution—even if it means getting scooped—rather than take a chance on getting something wrong.”

While Belcamino’s first outing, Blessed are the Dead, was inspired and very loosely based on a story she covered, all her subsequent books have not been news items she personally covered, though they have been inspired by real life events.

Part of the backdrop to BLESSED ARE THOSE WHO MOURN is the Suisun Bay Reserve Fleet, a ship graveyard of decommissioned/inactive US navy warships in the San Francisco Bay Area. For Belcamino, it always held appeal. “I read somewhere that writers should base their big scenes in a place that gives them a visceral reaction. I’ve always been absolutely fascinated by the ship graveyard in the Bay Area. When I lived nearby, it was one of those places that gave me the shivers to drive by. It is so much larger than life and hard to believe it exists, so for me it was a natural place to include in my book. For that scene, I was lucky enough to encounter a website that had pictures from these two guys who snuck onto the big ships and wrote in detail about their adventures and took amazing photographs. I’m totally jealous they did this.”

Given the high stakes in this novel, I wondered what might be coming next from Kristi Belcamino. “What I found when I sat down to write my first book was that the main character took on a life of her own at the same time the world I created became something separate from me.” She recalls that discovery as being something wonderful for her. “When I wrote ‘the end’ I discovered that I wasn’t ready to leave that world yet and almost immediately sat down to write the second book. So it wasn’t until I finished the first book that I realized I wanted it to be a series.” So does that mean there’s more to come? Belcamino isn’t saying—at least not yet. “I initially had a four-book series plotted, so any adventures she has next will be a surprise to me, as well!” 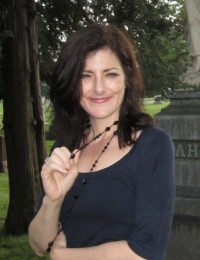 Kristi Belcamino is a writer, photographer, and Italian mama who also bakes a tasty biscotti. In her former life, as an award-winning crime reporter at newspapers in California, she flew over Big Sur in an FA-18 jet with the Blue Angels, raced a Dodge Viper at Laguna Seca, watched autopsies, and conversed with serial killers. Her first novel, BLESSED ARE THE DEAD, was inspired by Belcamino’s dealings on her crime beat with a serial killer who police and FBI agents linked to the kidnapping and murders of little girls.