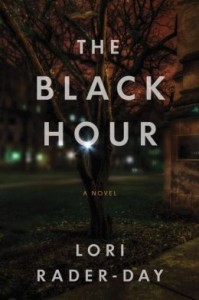 Imagine being shot at point-blank range in a darkened hallway by someone you’ve never met. And imagine that your assailant promptly turns the gun on himself, depriving you of any chance of knowing why he did it. Somehow you survive the attack and manage to pull through months of surgeries and rehab and return to your job. But what if your colleagues assume you are somehow to blame, that the true motivation for the attack was something you had done? One of the cruelest injuries of the attack is the callous blackening of your name by vicious gossip. And then there is the haunting question in your own head: Why? Why did that young man shoot me?

I recently talked to Lori Rader-Day about her riveting debut novel, THE BLACK HOUR.

THE BLACK HOUR straddles two genre categories, psychological thriller and crime fiction. How would you categorize your book?

My agent called it a thriller. My press called it a mystery. I’ve heard “psychological suspense” a couple of times. I don’t know, really. Nobody knows. The greatest mystery in mystery writing is where the lines occur between marketing terms. I get why we need them—they’re in service of helping readers find the books they’ll like. With so many books being published, helping readers find your book is a real hurdle. Here’s another marketing term: discoverability. I’m hoping THE BLACK HOUR will be stored in the mystery sections of bookstores and libraries, but as for what I call it, I’ve adopted “crime fiction.” It seems the most broadly defined. I can probably promise a crime of some kind will occur.

I’ve met you. You are a remarkably funny person. Yet your novel is a powerful study of depression, pain, and introspection. It’s profoundly dark, starting with the title itself. Was the writing process difficult for you or do you enjoying torturing your characters?

THANK YOU. I’m actually a fun-loving person, but, yes, THE BLACK HOUR kept taking darker and darker turns. These are murder mysteries, though, right? If you write at all realistically about murder, you might be expected to go a little dark. I like to point out that one of the ways in which I tried to lighten the book—for my own amusement and for the readers’—was by having characters who approached their (dark) lives with at least some (dark) humor. Was the writing process difficult or do I enjoy torturing characters? That’s not an either/or question. Yes to both. The process of writing is always difficult and I love to make bad things happen to good characters. If bad things didn’t happen to them, why would you keep reading? Good things happen, too, though.

THE BLACK HOUR is a stand-alone. Are you considering writing a series?

My next book might be a series starter. I have about seven ideas for books that could start series, but no time to explore them all. “Considering” is not my problem. My problem is that I enjoy a good night’s sleep and spending at least a few minutes of the day with my husband and dog and also have a day-job. Where is the effortless, button-pushing life we were promised by The Jetsons?

Wait. What was the question? Yes. Yes, I’m considering writing a series. I have to keep myself interested before I can hope to keep readers interested, though, so I write the story that feels most urgent to me. I also just really enjoy reading stand-alones, so I don’t think it’s a problem to build a career writing them.

Your prose is compelling, both the patient narration and the sparkling dialogue. I admire your skill at painting climactic scenes, blurring focus as a camera lens would do. It is particularly effective in your story, in the confusing aftermath of Amelia Emmet’s traumatic injuries. And it builds terrific suspense. Can you talk about how you reveal details without giving the game away?

I like the idea of the writer’s job being likened to the camera lens. That feels right to me. Except that humans don’t have the attention or the memory of the camera. We’re flawed storytellers, which is one of my favorite things to play with. Amelia’s memory of her attack isn’t complete—some might say from a desire to forget—and that gave me the chance to draw out her experience more naturally. I also have a real problem with flashbacks. Real human memory isn’t complete and detailed, so I don’t think story memory get to be, either.

Two narrators share the load of storytelling in THE BLACK HOUR. As the climax approaches, the duet intensifies, becomes more staccato. Can you talk about how you kept the voices distinct?

Duet. You’re really killing this interview here, Jim, because that’s exactly how I set out to build the book. I guess I was worried about my abilities to pace a novel, so I built in some structure that would help bring the pace along as the book neared its—wait for it—crescendo. As for keeping the voices distinct, what I worried about was that the characters would sound too much alike, that they would sound like me. I think the trick for this kind of back-and-forth is that each character has to live his or her own desires. I had to remember that Amelia wanted one thing, and Nath wanted something entirely different, even in some cases, the opposite of what Amelia wanted. Oh, and revision, for when I got it wrong. I’m a big believer in revision.

The advance buzz for THE BLACK HOUR has been extraordinary. Starred reviews, must-read lists, profiles… You must be over the moon. Tell us about your writer’s journey and what it means to reach this moment.

I kind of want to get a tattoo of my Publishers Weekly star. Yes, I feel very lucky to have had the attention for the book. I’m also a little awkward with attention, so probably no tattoo. I started writing as a kid, started finishing things when I was a teenager, wrote all the way through high school and college and my first job—and then I made about five life changes all at once and had a hard time getting to the page. An impossible time, actually, for five years. Not a word. After a friend of mine got his first book published, I realized what he’d done differently was that he’d put in the time. So I committed to doing that. It still took eight years from that moment to write a book I thought I could put out into the world. I hear stories of people who write ten, eleven books before one of them gets published and I’m not sure I would have the fortitude. But someone else is going to see that I spent eight committed years and think I’m crazy. Maybe I’m crazy, but I also have a book. More than any review or star, having THE BLACK HOUR published means everything to me because I’ve done something that I always promised myself I would do.

Do you have special plans for your launch day?

Taking the day off my day-job to do social media and things like that, but I hope to treat it a bit like my birthday—meet a friend for lunch, maybe, and take my husband out for a drink after work. I’d love to stop by a bookstore to see THE BLACK HOUR in the wild, but I’m not entirely convinced that this is all real and that it will be there on the shelf. Right after my launch day, I’m off to my very first ThrillerFest, where I hope to hang out with my crime fiction pals.

What’s next for Lori Rader-Day? Tell us about your next book.

My next novel is out from Seventh Street Books next summer. Tentatively titled LITTLE PRETTY THINGS, it’s about a woman about ten years out of high school working below her ambitions at a roadside motel whose estranged best friend checks in one night and does not get the chance to check out. Actually, it’s probably more about the forced competition between girls and women, but let me get another round of revisions done before I’m sure.

Lori Rader-Day has published fiction in Good Housekeeping, where she won first place in the magazine’s first short-story contest; The Madison Review, which awarded her the 2008 Chris O’Malley Prize in Fiction; TimeOut Chicago; Southern Indiana Review; Crab Orchard Review; and other journals and magazines. She lives in Chicago, where she is active in the Mystery Writers of America Midwest Chapter, Sisters in Crime Chicagoland Chapter, and International Thriller Writers. In addition, she is an instructor for Story Studio Chicago/North Shore, where she teaches mystery writing.