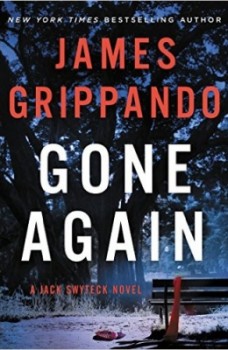 James Grippando has been thrilling fans since his debut Jack Swyteck novel, The Pardon, in 1994. His twenty-fourth book. GONE AGAIN, is out March 1, and it’s an emotionally complex powerhouse of a story. Jack Swyteck is back, older and wiser than he was all those years ago. He’s returned to his old stomping grounds, the Freedom Institute, and is instantly drawn into a death row case that presents both conflicts of conscience and a race against the clock. GONE AGAIN breaks the stereotypes associated with missing-teen stories. This is an original, a classic.

I got the chance to discuss Grippando’s latest with him and snuck in a few other questions about his writing as well.

GONE AGAIN is the eleventh in this addictive series. How do you keep Jack fresh?

I introduced readers to Jack in The Pardon as an ideological and somewhat naïve twenty-seven year old lawyer whose love life could have filled an entire volume of “Cupid’s Rules of Love and War—Idiot’s Edition.” In other words, there was a lot of room for Jack to grow. He and his second wife are expecting their first child in GONE AGAIN, and he’s taking on the kind of cases that you would expect an accomplished criminal defense lawyer to handle. Readers have loved watching him “grow up,” and there’s more to come.

GONE AGAIN explores the fallout of a harrowing adoption horror story. Sashi Burgette, the teenaged girl at the center of GONE AGAIN, bears deep, emotional scars that her adoptive parents are ill-equipped to handle. Best intentions aren’t enough to spare the family devastating pain and suffering. Can you tell us about reactive attachment disorder or RAD, the syndrome that afflicts Sashi?

RAD is a mental disorder that is usually caused by severe neglect or abuse early in life. The most serious cases are orphaned children from war-torn countries. Their false belief that they are incapable of being loved continues through adolescence and into adulthood. It was a challenge to develop a character like Sashi, because RAD children are the complete opposite of what you expect of children. If a parent tried to hug her, child with RAD would typically reject physical contact even from those closest to her. As they get older, they might develop all the attributes you’d expect in a teenage runaway. Jack makes this point better than I can when questioning a doctor on the witness stand in GONE AGAIN:

“Dr. Pollard, as the expert witness in this case, can you tell us whether a RAD child would likely feel any remorse about running away from home?”

“The brain of a RAD child is not really programmed to feel remorse.”

“And if she did run away, would she find herself pining away for mom and dad?”

The doctor shook his head. “Not likely.”

“Would she be capable of manipulating strangers to give her money or provide other needs?”

“RAD children can be quite manipulative.”

“In fact, it’s common for adolescents to seem charming and helpless to outsiders, while being quite the opposite at home. Isn’t that true, Doctor?”

“That is very true.”

“RAD children are also known to be effective liars, are they not?”

“They can be. I’ve had parents tell me that the only time their child looks them in the eye is when she is lying.”

“And they will do these things without a second thought—as you said, without remorse.”

“Their conscience doesn’t work the way yours or mine works, does it?”

“Doing things that might shock the average person makes them feel in control. Right, Doctor?”

“Yes, and it’s very frustrating for parents. For many, it’s overwhelming.”

Before reading GONE AGAIN, I had never heard of “rehoming.” Can you shed some light on this practice?

“Rehoming” is actually a term that started with pets. You tried out a new dog or cat for a while, and if it didn’t fit your life style, you could give it to someone else—“rehome” it. Until I started my research for GONE AGAIN, I had no idea that adopted children could be “rehomed.” I was utterly shocked to find out how susceptible the rehoming process was to abuse, and the real life “rehoming” tragedies that cry out for reforms. I hasten to point out that “rehoming” has nothing to do with the placement of children through foster care. It happens strictly with international adoptions, and even these are coming under stricter controls through treaties. But the fact remains that there are real life examples of adoptive parents who took on more than they could handle in the adoption of a child from a foreign country, and who made a terrible decision to “rehome” their adopted child with convicted felons and other characters who should have never been allowed to get near any child.

GONE AGAIN combines elements of mystery and legal thriller. Readers want to know what happened to the missing girl and, at the same time, wonder what will happen next to our hero. The legal wrangling is fascinating in its realism and detail. All of that makes for a delicate balancing act that’s hard to pull off. Talk to us a bit about your thoughts on genre and where you’d place your books.

Readers and writers have endless debates about “what’s a thriller” and “what’s a mystery.” I have a pretty simply view of what I write, which learned from my first agent, Artie Pine (I am still represented by his son Richard). Artie told me early on that I write “suspense,” which means, first of all, that the opening ten pages had better be killer. I once asked him what makes a killer ten pages. His answer: “Do you want to get to page eleven?” I think Artie nailed it.

The city of Miami is one of the stars of the Jack Swyteck novels. Your love of South Florida comes through loud and clear in the locations you describe. Tell us about your Miami.

Miami is my home, I’ve lived here for almost thirty years, and I would have left a long time ago if I didn’t appreciate its complexity the way my characters do. I love it when locals who have lived here much longer than I read a Jack Swyteck novel and tell me, “Wow, I never knew there was a hundred-year-old Bahamian cemetery in the Grove Ghetto,” or “Gee, I had no idea that Miami’s Overtown Village was once Miami’s Little Harlem,” or “How cool is it that Amelia Earhart began her ill-fated flight around the world from a little airstrip near Miami?” The diversity of the cast in the Swyteck novels is also a big help. Jack is half Cuban, his side kick Theo Knight grew up in Miami’s toughest neighborhoods, and his fiancé Andie Henning is an FBI agent who goes into parts of Miami that most people wouldn’t dare visit. Each of these characters sees Miami from a very different perspective, and I love sharing that with my readers.

Miami evokes all the right buzz words—smart and sexy, young and beautiful—but it also has a self-destructive quality that triggers the kind of fascination we have with a reckless youth. It is blessed with natural beauty, but it’s threatened by developers. It has the gift of cultural diversity, but is plagued by ethnic tension. Its nightlife is unrivaled, but the threat of violence is never far enough away. There’s glitz, there’s money, there’s the see-and-be-seen—and then there are neighborhoods that seem straight out of the third world. You often hear it said that truth is stranger than fiction, and nowhere is that more true than in south Florida . Where else could the United States Attorney lose his job after losing a big case, getting drunk, and biting a stripper? But it’s where I live, it’s where I practiced law, and it will always be so much more than just the backdrop for my novels.

Jack Swyteck defends convicted rapists and murders, which earns him plenty of enemies and a healthy measure of his own self-doubt. In GONE AGAIN, you’ve done an extraordinary job of painting the convicted murderer Dylan Kyle. We feel some measure of sympathy for him and his case, but he is still a wretched human being, guilty of horrific crimes. Should we root for Jack to win every case? I’m interested in a lawyer’s take on the system.

I think what makes the Swyteck series work is rooting for Jack to do the right thing, rather than to win every case. Jack plays to win, and I don’t mean to minimize the importance of what goes on in a courtroom, but he plays in an arena that is inherently entertaining. The courtroom setting is theatrical. The drama is real. The mishaps and surprises can be both shocking and hilarious. A trial appeals to the voyeur in all of us, satisfying everything from our fascination with celebrities to our prurient interests in the bizarre and criminal. Courtrooms are windows into everything from the mind of a serial killer to your neighbor’s bedroom. Lawyers ask the most personal and probing questions imaginable, and sometimes people have to answer, for all the world to hear. None of this is particularly new—there have always been “trials of the century”—but I do think that interest has escalated in recent years, largely due to the ability of television to compress lengthy trials into entertaining snippets. It certainly makes my job as a writer more fun. The more sophisticated the audience, the more complex and multi-layered I can make the plot.

Andie is an undercover agent for the FBI. She likes to speak for herself—so much so that I’ve given her two novels without Jack: Under Cover of Darkness, in which she tracks a serial killer in Seattle; and Cash Landing, which is a prequel to the Jack Swyteck series from Andie’s point of view.

And where is Jack’s first wife today?

Ha! Good question. Cindy Paige was last seen in Beyond Suspicion. But you asked earlier how do I keep the Swyteck series fresh, and this touches on part of the answer. Much of the “freshness” has to do with the extended cast and the characters who have shaped Jack’s existence over the years.

Can we expect more of Jack and Andie in the future? What’s next for James Grippando?

My next novel will be my twenty-fifth, which is somewhat of a milestone in any writer’s career. So it has to be a Jack Swyteck novel, and of course Andie Henning is back!

Our readers are always interested in successful authors’ takes on the publishing industry. How has your writing life changed since The Pardon was published in 1994? Are you optimistic about the future of publishing? 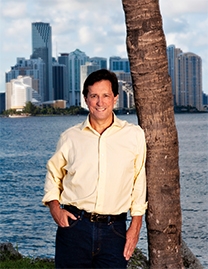 James Grippando is a New York Times bestselling author of suspense. GONE AGAIN is his twenty-fourth novel. Grippando was a trial lawyer for twelve years before the publication of his debut novel in 1994, The Pardon, and he now serves as counsel at Boies, Schiller & Flexner LLP. He lives in South Florida with his wife and children.