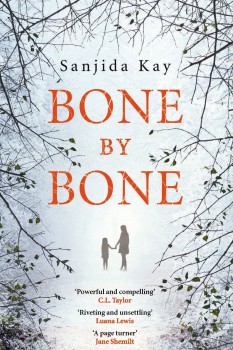 Recently divorced, Laura never imagined that making a new start with her nine-year old daughter, Autumn, could be so hard. But when Autumn becomes a target for bullies at school, and Laura’s reaction crosses the line, Laura’s dream of a bright new start takes a dangerous turn. Taunted and harassed, with no support, Laura struggles to find her family’s happy ending.

“I was bullied as a kid,” says Kay, acknowledging that when she had a child of her own she began to worry about her daughter’s potential fate. BONE BY BONE was born out of Kay’s musings about what would happen if a mother fought back against her child’s bullies.

“Although BONE BY BONE is a thriller, it deals with the horrific side of physical, emotional and cyber bullying in a realistic way,” says Kay. It’s an issue that hits close to home. In order to help in the prevention and protection of childhood bullying, Kay is donating a portion of the profits from BONE BY BONE to the anti-bullying charity, Kidscape.

“My previous novels were more literary,” Kay says. After the birth of her child, however, Kay could no longer spend copious hours “researching the past or travelling to far flung places” as she had done with her previous books.

BONE BY BONE is set in Bristol, where Kay lives with her husband and daughter. But her love of the natural world still plays a role in her current novel. “When I was plotting BONE BY BONE, I wanted to write a gritty novel set in Bristol’s city centre. What actually happened was that lots of the action ended up in an urban nature reserve!”

Kay is dedicated to her daily routine, starting each morning with some exercise and a strong coffee before committing to writing 1,000 words per day. “I have set hours for writing—I love it but I treat it like a job. Usually I write in my office, which is lovely,” she says, though notes she also enjoys working in a café on occasion. “If I get stuck, I grit my teeth and force myself to sit in front of my computer screen. When I need to think big or wrangle with a knotty plot problem, I’ll go for a long walk.”

Kay hopes her experience as a writer will eventually help her daughter, who is already aspiring to be an author at age five. “I’m hoping [she] will become a best-seller and help me fund my travel addiction,” she jokes. Kay says that practice is essential for anyone who wants to be a writer, as is a commitment to lots of reading. “At the very least, you develop a peer network to help critique your work and, at the very best, you get to listen to what some of our greatest writers have to say about the craft.”

In Kay’s opinion, having another job also helps to stem the isolation and the hits to one’s self-esteem that can result from being a writer.

She was inspired and influenced by Emily Bronte’s Wuthering Heights, while more recent influences include Gillian Flynn, Peter Swanson’s The Kind Worth Killing, Maggie Mitchell’s Pretty Is, and Julia Heaberlin’s The Black-Eyed Susans. Holly Seddon’s Try Not to Breathe is currently on Kay’s nightstand.

Among her passions, Kay includes being outdoors, hiking, and mountain biking, as well as occasionally watching “grim and dark” box sets like Luther, The Walking Dead, or True Detective.

While Kay also acknowledges her love of cake, particularly coffee cake, she says that after writing a book about sugar, she has tried to cut it out of her diet. When she wants to indulge, “I usually make my own sweetened with unrefined sugars.”

Kay is currently writing her second thriller, The Stolen Child, with a publication date of spring 2017. “It’s set on Ilkley Moor and has a Wuthering Heights theme,” she says. A young couple, desperate for children, adopt a little girl, Evie. “When Evie turns seven, she receives a card from her father saying that she was stolen from him and now he’s coming back to get her.” 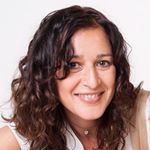 Sanjida Kay is a writer and broadcaster. Bone by Bone is her first thriller. She lives in Bristol with her daughter and her husband.