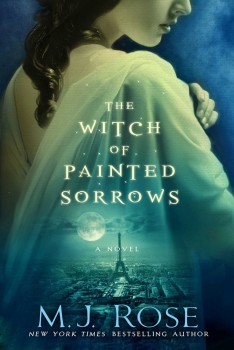 M. J. Rose is the New York Times bestselling author of fifteen novels, including the Butterfield Institute and Reincarnationist series. Her latest novel, THE WITCH OF PAINTED SORROWS, is the first book of a new trilogy from Atria Books/Simon & Schuster: The Daughters of La Lune. An opulent tale of destiny and reinvention, relentless passion and cabalistic mysticism, of love lost and the pursuit to regain it across death and the ages, THE WITCH OF PAINTED SORROWS is set against the backdrop of Belle Époque Paris.

Sandrine Salome is the wife of a New York banker. And though she enjoys wealth, social position, and a profound, spiritual bond with her adoring father, her marriage is passionless. When her husband betrays her father and drives him to suicide, Sandrine flees secretly to Paris, where she enters her grandmother’s world, a demimonde of courtesans and their wealthy patrons. Here, Sandrine discovers her own burning passions and a promising new life as a painter studying at the École des Beaux-Arts. She resolves never to return to the life she left behind. But an ancestral malevolence lurks in the walls of her grandmother’s mansion. And it wants Sandrine’s heart and soul.

I sat down with M. J. Rose to discuss her career and her latest novel, the gripping and luxuriant THE WITCH OF PAINTED SORROWS.

You have a passion for art, with roots going back to your formative years when you haunted New York’s greatest museums. Painting is at the heart of THE WITCH OF PAINTED SORROWS, from beginning to end. You present remarkable critical insight and knowledge of art, art history, and the mechanics of painting. Can you tell us something about your background in the world of art?

My grandmother was a painter and my mother a photographer. I loved painting and drawing from the time I can remember and started taking art classes when I was six years old—at the Metropolitan Museum of Art—no less. From there, it was the Art Students League in high school and then onto college where I got a fine arts degree with a minor in art history. I would still be painting if there had been a way for me make a living at it, but try as I might, I just wasn’t very good.

THE WITCH OF PAINTED SORROWS is a fascinating study of the process of a possession of a body and soul. You handle the progression masterfully, by degrees, with fits and starts, advances and regressions, all the while keeping your readers guessing. Can you talk a bit in general about how you put off your dénouements without losing the audience?

When I work on the first draft of a book, I see the story play out in my mind like a movie, and so the action comes as a surprise to me in those first months. I always worry that I haven’t pulled it off because after that first draft, I can’t see it for the first time again. But glad you think I did.

The Reincarnationist series deals with metaphysical and spiritual themes: reincarnation, destiny, predestination, mysticism, the occult, and so on. You’ve created compelling paranormal thrillers that span centuries in your narrative. But love and passion are universalities always at the heart of these novels. Can love survive death?

I do believe it can, yes.

All right, then tell us about time in your books. Time and love. The prospect of crossing time and the permanence of love.

Since childhood, I’ve been fascinated by time turning in on itself. I remember watching a movie called A Portrait of Jenny, one such time-warp movie, over and over with my mom whenever it was on TV. It was a 1940s movie with Joseph Cotten and Vivien Leigh. It’s still one of my favorite films.

In The Collector of Dying Breaths, you use alchemy and perfume to weave a tragic tale that takes centuries to play out. The chemistry of fragrance science, ancient pharmaceuticals, and alchemy dovetail into a fascinating science lesson and a gripping story. Are you writing what you know or did you study hard? Can you talk about research?

I studied hard. When I was in advertising—on Mad Ave—I worked on several perfume campaigns and was lucky enough to watch world-class noses create world-class fragrances and then help bring them to market. When I decided to write a series of novels about a perfumer, I had a basis of knowledge but​ still needed to learn a lot. I traveled and met with experts and read hundreds of books.

You are clearly an aesthete. You have a passion for art, literature, wine, perfume, etc. All things to do with the senses. Smell, in particular, is central in your work. Tell us about the five senses in your fictional world.

I don’t think writers start off knowing what their “style” is. Or what their “voice” is. For me it’s only been through interviews like this one and reading reviews that I’ve learned that my style involves the senses. When I’m writing, I see my characters’ world though sight and touch and smell and taste and sound—it’s just how my process works.

Funny. I do wish I could have a cigarette when I’m finished. I find writing those scenes challenging yes—because I want to offer the reader a deeper experience​ and not fall into cliché​— but ​to be honest ​(and not sure what this says about me) I find them easier to write.

Yes, I very much want to. I just have to find the time.

Before embarking on your writing career, you were a creative director in advertising, and later you founded Author Buzz, a marketing service for writers. You famously self-published your first novel, then parlayed it into a publishing deal. The rest is history. You’ve said that your foray into self-publishing was an experiment with a goal in mind: to prove that your “unmarketable” book could indeed be marketed. And you were right. The publishing landscape has changed drastically since your experiment in 1998. What advice would give to aspiring writers and writers contemplating the self-publishing or hybrid path?

The landscape is changing so drastically I hesitate to offer advice, other than the only reason to write is because you want to tell stories. As Joseph Campbell said, “Follow your bliss,” and if this is your bliss— you don’t really have a choice. You can’t count on success no matter what path you take, be it traditional, hybrid, or indie.​ Being an author is a living lottery.​

As one of the founding board members of International Thriller Writers ten years ago, you have been a guiding light for that organization ever since, donating your time and expertise to promote and foster the genre and its writers. Personally, I’ve been struck by how generous the organization is to its members. With no fees, ITW manages to fulfill its mission. Congratulations and thank you. Has ITW accomplished all you hoped it might? What does the future hold for ITW?

It has and exceeded what I’d hoped. Over the years the boards of directors and members have been so supportive and generous to the organization— from donating time and short stories to teaching and mentoring. I think I’m most proud of how innovative ITW is, how nimble, and how determined we are to help our members. I hope we can do even more in the future.

Not fair. I’m friends with too many writers to name names. But it’s a wonderful genre, and I’m so proud to be part of it.

Fans of M. J. Rose have come to expect sumptuously layered tales that dive headlong into the human emotional experience. Lush, amorous, and decadent, THE WITCH OF PAINTED SORROWS leaves no room for half measures or prudishness. Coming March 17 from Atria/Simon and Schuster. 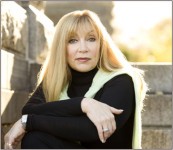 M.J. Rose grew up in New York City mostly in the labyrinthine galleries of the Metropolitan Museum, the dark tunnels and lush gardens of Central Park and reading her mother’s favorite books before she was allowed. She believes mystery and magic are all around us but we are too often too busy to notice…  Books that exaggerate mystery and magic draw attention to it and remind us to look for it and revel in it.

Rose is a the Co-President and founding member of International Thriller Writers and the founder of the first marketing company for authors: AuthorBuzz. She runs the blog, Museum of Mysteries. In 1998, her first novel Lip Service was the first e-book and the first self-published novel chosen by the LiteraryGuild/Doubleday Book Club as well as the first e-book to go on to be published by a mainstream New York publishing house. Rose has been profiled in Time magazine, Forbes, The New York Times, Business 2.0, Working Woman, Newsweek, and New York Magazine. She has appeared on The Today Show, Fox News, The Jim Lehrer NewsHour, and features on her have appeared in dozens of magazines and newspapers in the U.S. and abroad, including USA Today, Stern, L’Official, Poets and Writers, and Publishers Weekly.

Inspector of the Dead by David Morrell