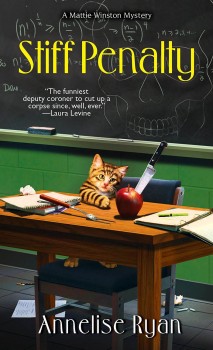 STIFF PENALTY, released in February by Kensington, is the sixth book in the Mattie Winston mystery series by Annelise Ryan (the pen name of author Beth Amos). Like so many writers, as a child Amos usually had her nose in a book and dreamed early on of being a writer. Like perhaps not so many, she wrote hundreds of short stories and has saved all her rejection letters to prove it. Doubting her ability to support herself through writing, Amos decided to pursue a career in nursing. She never stopped writing, however, and at the age of forty sold her first full-length novel, Cold White Fury, to Harper Collins. Amos was off to the races. In addition to her first novels with Harper Collins and the Mattie Winston series, she writes the Mack Dalton mystery series under the pen name Allyson K. Abbott.

STIFF PENALTY is edgy, smart, and crisp, the characters distinctive, sometimes quirky, but always believable. The tension and suspense so expertly crafted by Amos are enhanced by a good dose of wry humor, and her medical knowledge lends rich credibility to her story. When you visit her website, be sure to take a look at her workshops on building characters, suspense, and other valuable writing tips. She’s got a lot of good advice!

Amos took time to talk with The Big Thrill about the writing life.

Medical Examiner Mattie Winston, your central character, is six foot tall, insecure about her looks, politically incorrect, and has a quite active libido—somewhat different from most female protagonists. What was the inspiration for her character and is there a message you want your readers to grasp?

Despite her differences, I think Mattie is in many ways the universal woman. We all have insecurities about how we look, and we all have naughty, politically incorrect, or even mean-spirited thoughts at times. Mattie is tall because I’m tall and the difficulties and insecurities that go along with that are something I know. Mattie often says the things I wish I could say. And I think Mattie’s desire to be loved and appreciated is a universal need that most women can relate to. Mattie has insecurities, but she’s a strong, independent woman who learns to trust her instincts, live with her shortcomings, and make the most of her strengths. She has a strong sense of who she is and what she wants, and she’s not afraid to go after it. Okay, maybe she’s a little afraid, but her fear empowers her in many ways. If there is a message of any sort in there, it’s that we’re all okay the way we are, and we shouldn’t be afraid to reach for those goals and desires.

Mattie is confronted with an unsolved murder, a dangerous stalker, a pregnancy, and a love affair she’s unsure of. Was it difficult to keep all these threads distinct and moving forward without losing direction?

Not only is it a challenge to keep Mattie’s life issues straight in any one book, it’s a challenge to keep them straight throughout the series. I’m a very organized person with a touch of OCD and that helps … that, and a whole lot of sticky notes. I like convoluted story lines and plots, and I take copious notes as I write to remind me of different plot points that need to be addressed and/or resolved. And I frequently have to go back and fact check things in the previous books. Now that I’m writing two different series, it’s doubly hard.

Speaking of your different series, each has its own female protagonist—Mattie Winston in one and Mack Dalton in the other. Is one of these women closer to your heart than the other?

Both women have parts of me in them, and both women are like old and dear friends. But Mattie has more of me in her than Mack does. The creation of Mattie was a labor of love and a bit of a gamble that I took when my writing career was in a stagnant state. After having three suspense novels published by HarperCollins under my real name back in the nineties, I lost my publisher in a corporate shuffle and my agent to retirement. The character and the basic story line for the Mattie books came about from a thought I had while watching my first autopsy. As soon as I had the thought, my writer mind realized what a great opening line it would make for a novel. The entire premise came from that, and the idea of Mattie was born. But it took years to bring her to life on the page. I knew that both humor and location would be a big part of the story, but when I tried to set it in Virginia where I lived at the time, it never quite gelled the way I wanted it to. Then I moved to Wisconsin and the quirkiness of this state, my small town, and the people who live here finally made it work. I believed in Mattie and was determined to bring her to life, but it took many years and many rejections to get her there.

Who would you cast in a Hollywood adaptation of your books?

This is always a fun game to play, but I’ve had a hard time casting Mattie. The closest I can come is a cross between Tea Leoni and Melissa McCarthy. As for Hurley, I’ve always thought that Eddie Cahill, who plays Detective Don Flack on CSI: NY would be perfect for the role. And Danny DeVito would make an excellent Izzy.

As a full time ER nurse, when do you find time to write?

I’ve been fortunate enough over the past ten years to hold down weekender positions in the hospital ERs where I’ve worked. These positions require you to work twelve-hour shifts every weekend, but in exchange you get time-and-a-half pay, which makes it work out to the same as a full time position. It leaves me with Monday through Friday to write.

Do you have any strange writing habits (like standing on your head or writing in the shower)?

I have a love affair with sticky notes. I plot on them, I create characters on them, I track story lines on them, I write reminders on them, and I have them stuck all over my office, my computer, and my printed pages. There are more organized ways to do all that (like keeping a notebook) but for some reason I work best with the sticky notes. Outside of that, I have lots of strange habits but they aren’t writing related.

Is there one subject you would never write about as an author?

I can’t think of one. I can think of ways I wouldn’t want to present certain subjects, but I wouldn’t avoid them.

You’ve said in interviews that you use a pen name because your ER patients might be uncomfortable knowing you think up “devious and clever ways to kill people.” Fair enough, by why two pseudonyms?

To be honest, the pseudonyms were at the request of my current publisher. As I mentioned before, my writing career under my real name ended up in a hospice program, and the publishers wanted to market the Mattie Winston series as written by a new, debut author. With the Mack Dalton series, they wanted another “debut.” It’s purely a marketing ploy.

I made use of my medical knowledge and background. I wrote medical brochures, hospital newsletters, patient information and education materials, and articles for medical magazines. I also wrote book reviews for B&N.com for several years.

What inspired you to write your first book?

The first book I ever wrote was motivated by my failure to get any of my short fiction published after decades of trying. I figured I’d try something different and after writing several partials, I finally finished a whole book. It ended up in a box in storage, and it remains there to this day.

What do you consider the key to a great mystery?

Characters the readers will care about and a puzzle that’s challenging but solvable. I try to always play fair with my clues, but I also make the readers work a little to notice them, put them together, and figure it all out.

Who are your favorite authors in this genre?

I grew up on Nancy Drew and Agatha Christie. My sisters and I used to stage our own Nancy Drew mysteries, hiding clues in the work buildings located on the property where we lived—buildings we weren’t allowed to be in, I might add. It made the suspense that much greater. As for modern-day writers, I lean more toward the thriller and suspense genres for my reading. And I think all good novels, regardless of genre, have a mystery in them. Some of my favorite authors are Tess Gerritsen, Dean Koontz, Suzanne Collins, Sue Grafton, Stephen King, David Baldacci, Dennis Lehane, Jennifer Weiner, Elizabeth Berg, and Laura Lippman. There are many more. I like a lot of variety in my reads.

I’ll give anything a read, fiction or nonfiction, if I have the time. I read cereal boxes and shampoo bottles. As for writing, I’d be willing to tackle anything, but time and contracts have me limited for now. I avoid reading in my own genre when I’m immersed in writing one of my books, but will then binge-read them in between projects.

What books are on your nightstand right now?

I’m currently reading As You Wish: Inconceivable Tales From the Making of the Princess Bride by Cary Elwes. And I have about forty books waiting on my Kindle in my to-be-read pile.

Invisibility. I would love to be able to go anywhere and listen in on anything without anyone knowing.

That life is much too short. Carpe diem. And remember to laugh as much and as often as you can.

Any advice for aspiring writers?

Leave your ego at home when people critique your work. Be open to suggestions and willing to try new things. Read extensively. Always listen to and observe the world and the people around you.

Can you tell us what you’re working on now?

I’m putting the finishing touches on the seventh Mattie Winston book, Stiff Competition, before turning it in to my editor. Then I’ll be starting book #4 in the Mack’s Bar series. 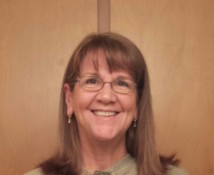 Annelise Ryan is the author of the popular Mattie Winston mystery series and a pseudonym for a freelance writer and the author of several other novels. Ryan is a real life emergency room RN living in Wisconsin. She believes laughter is the best medicine, and with the Mattie Winston series she is hoping to “medicate” the masses.

For more Mattie Winston fun and to keep up with the latest news, visit www.mattiewinston.com.