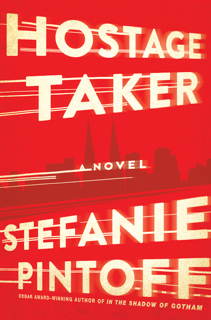 Throngs of holiday makers crowd the streets of New York in anticipation of the Christmas tree lighting in Rockefeller Center, but a short distance away, police and the FBI are responding to a terrifying hostage situation at iconic St. Patrick’s Cathedral. Traffic stops, the celebrations are put on hold, and the newscasters begin their non-stop reportage. HOSTAGE TAKER by Stefanie Pintoff, takes us through one day of a nail-biting and tension-filled standoff between an unknown hostage taker and FBI Special Agent Eve Rossi. She’s smart, gutsy and tough, and her secret team of notorious former criminals with their huge egos and disregard for the law is completely believable.

A merciless hostage taker who has targeted Eve asks the question, “What are you guilty of?” With the clock ticking relentlessly, the New York City landmark is wired to blow up at the first negotiating mistake. Pintoff’s writing is tight and skilled, her pacing superb, and her research meticulous.

Pintoff, a former teacher and lawyer who lives in New York, took a break from her busy schedule for this interview with The Big Thrill.

Your protagonist, FBI Special Agent Eve Rossi, is a master at the psychological strategies of hostage negotiation. How were you able to get so believably into the minds of both Eve and the hostage taker?

The job of all writers is to step into their characters’ shoes and present the story from their points of view. Seeing the world from someone else’s perspective is both the hardest challenge and the greatest pleasure of writing fiction. But it’s also how your characters acquire flesh and blood, and become real. While I did plenty of research to figure out how hostage negotiations are handled—combing through memoirs and learning from interviews with former professionals—there’s really no substitute for that imaginative leap into the mind of a character.

The setting of HOSTAGE TAKER is the iconic St. Patrick’s Cathedral in New York City. Without giving anything away, it was necessary for you as the author to have an intimate knowledge of the entrances, exits, underground tunnels, and secret passageways of the cathedral, in addition to the workings of improvised explosive devices and of the FBI. What were the challenges (research, literary, and logistical) in bringing this book to life?

The idea for this novel came to me shortly after Saint Patrick’s Cathedral began its massive renovation project—and I first saw the Cathedral buried in scaffolding. I looked at the chaos and upheaval, and began to think: what if … ? And yes, I began to research.

I’ve always loved that part of writing, since it lets me learn about interesting places and talk with people who do fascinating things. To research this novel, I made multiple visits to St. Patrick’s (I’m lucky to live in New York City). I did a stint with the FBI’s Citizens Academy, where I met and spoke with agents from different divisions. I combed through military and news reports; I read blogs written overseas; I heard from veterans of tours in Iraq and Afghanistan.

But ultimately, to bring this book to life, I had to sit down and write what I hoped would be a compelling tale. So while my iconic landmark and many details are real, my story is fictional. I’ve incorporated rumor and myth, legend and imagination, blending fact and fiction into a thriller.

There is a very real sense that the Good Samaritan no longer exists in contemporary society. Is there something here that you hope your readers will grasp?

This is a problem that’s captured the public’s imagination ever since the Kitty Genovese case in 1964, when multiple witnesses ignored her cries for help. This is still happening. Five years ago in New York, a Good Samaritan named Hugo Tale-Yax was stabbed when he tried to intervene in a fight between a man and a woman. He was a homeless man from Guatemala, and he bled to death on the street while people walked by. One person even took a picture. I expect readers will grasp the same frustration and helplessness I felt when I became aware of these events—and as a writer, this repeated phenomenon raised many questions I wanted to explore.

Your previous books were set in 1900s New York. What made you decide to leave that time period and set HOSTAGE TAKER in the present day?

Put simply, I wanted to try something new, to take on some different challenges. Many writers I admire have switched time periods, genre, or both; those who come to mind immediately include Stephen King, J.K. Rowling, Laurie R. King, and Lisa Gardner. If other writers have done it and succeeded, then I figured I could at least try.

Will Eve Rossi be a recurring character in future novels?

Definitely—and her team as well—though individual team members certainly have the potential to change along the way.

You bring diverse elements together that make the pacing of HOSTAGE TAKER remarkable. I could not stop turning the page. Can you tell us a little about how you achieve this?

A tight timeframe always adds suspense and keeps the pages flying. Adding a deadline ratchets up the tension even more. It’s all part of managing the plot’s structure.

The earliest writers of crime fiction realized how important this was because they wrote in serialized form. They needed their readers to stay invested in the story between installments, impatient for what would happen next. They made choices that became key to their stories, as they learned to dangle questions before their readers—withhold information—and keep everybody guessing as long as they possibly could.

In the opening pages of HOSTAGE TAKER, we meet a woman who is acting against her will. Seconds later, she’s murdered. Who is she? Why was she killed? By whom? What is it all about? The questions have to build, the answers have to remain obscure, until scene by scene, chapter by chapter, the story unfolds.

You use a clever device—classified FBI files—that give us the background and profile of each agent working with Eve to free the hostages. Are your characters fully developed before you begin or do they evolve as you write?

They definitely evolve as I write—and I hope they’ll continue to do so, with every book. I think the chance to watch characters grow is part of the appeal of any series, for both the readers and the writer.

Your professional background includes teaching and law. How have they informed your writing?

I’m not sure that they do to a great extent—except that they both gave me plenty of experience doing research, the organizational skills to handle large projects, and an immense respect for language.

What do you consider the key to great crime fiction?

The same that is key for all great fiction: a story with a memorable villain, characters you enjoy spending time with, plenty of twists and turns, and edge-of-your-seat suspense to keep you turning the pages.

What book would we be surprised to find on your nightstand?

Only because it’s a different genre than mystery/thrillers: Stacey O’Brien’s Wesley the Owl. I’m a huge animal lover, so well-written stories like these always appeal to me.

What writers have had the greatest influence on you?

For compelling characters, P.D. James; for structure and pacing, Thomas Harris; for surprise plot twists, Jeffery Deaver; for exploring gray moral areas, Dennis Lehane. And for maintaining suspense, two writers who do not write mysteries or thrillers at all: George R.R. Martin and J.R.R. Tolkien. No writers do a better job of constantly making the reader wonder “what’s next?”—so we keep reading to the next page, the next chapter, the next book in the series, dying to know how the whole story will end.

Not really. Ever since I approached Jane Austen’s Pride and Prejudice with trepidation—and ended up loving it!—I’ve learned not to pre-judge.

Any books you’re embarrassed not to have read?

No. Reading is a personal taste, and I’m a firm believer that everyone should read the books that they find most compelling—not those that fit anybody else’s idea of what “should” be read.

I don’t really experience writer’s block in the classic sense. Even on days when I’m less productive than I would hope, I can get words on the page and move the story forward. I don’t chalk this up to being a good writer, but to being an excellent reviser. I have faith that whatever I put down on the page in a first draft can be improved and made better, so I don’t stress over it.

To be a reader first … and to read broadly and widely, paying attention to how those writers you admire handle their craft. Every great writer I’ve known has been first and foremost a voracious reader.

I would have to pick more than one. Leonardo Da Vinci, Abraham Lincoln, Winston Churchill, and Agatha Christie—as different as they are, each led a life fueled by unique imagination.

To fly. I love to travel—and it would be a bonus if I were able to avoid airport security.

To paraphrase Maya Angelou, “hope for the best, prepare for the worst, and be unsurprised by anything in between.”

Eve and her team will return when a child is kidnapped on the most public of stages—the Macy’s Thanksgiving Day Parade. It’s called Whistleblower. 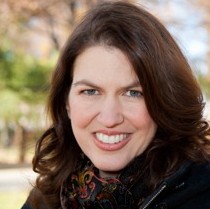 Stefanie Pintoff is the Edgar® award-winning author of three novels. Her writing has also won the Washington Irving Book Prize and earned nominations for the Anthony, Macavity, and Agatha awards. She lives on Manhattan’s Upper West Side, where she is at work on her next thriller.

To learn more about Stefanie, please visit her website.