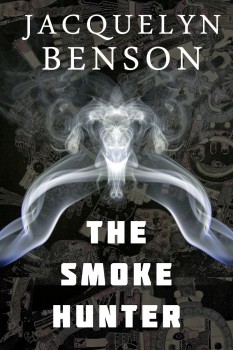 Deadly beasts, improvident rum consumption, and a treasure-hunting suffragette: Jacquelyn Benson’s debut novel, THE SMOKE HUNTER, is a smart, fun ride in the tradition of Indiana Jones and The Mummy.

The Big Thrill caught up with Jacquelyn to chat about genre-bending, magic mirrors, and dangerous men.

Ellie is such a smart protagonist. What inspired you to create her?

Ellie did not come naturally to me. When I set out to write THE SMOKE HUNTER, I started with the idea of a heroine who was something of a broken woman. I made it almost all the way through my first draft with her and hated almost every minute of it. Then this startlingly clear vision popped into my mind: a woman dragging her suitcase down the pavement, both terrified and exulted by the realization that she was a thief.

I lost the suitcase, but I kept the thievery. Instead of creating someone who was a victim of her circumstances, I found myself writing a woman who reached out and took hold of her own fate. The Ellie who made it into THE SMOKE HUNTER is smart and driven, unafraid of diving into circumstances other women of her time would find unthinkable.

You draw on a lot of history and mythology in THE SMOKE HUNTER. How much of it is true?

Quite a bit, actually. There were, in fact, stories of hidden cities of wealth and power that threaded their way through the Americas during the 17th and 18th centuries, from Mexico to Patagonia. This might simply have been a case of neighboring civilizations sharing and passing along the same myths and stories—or there might have been some sort of truth to them we’ve yet to discover. The same goes for the remarkable similarities between Mayan and Aztec origin stories, right down to the name of the city said to be the birthplace of their civilizations.  Obviously, in THE SMOKE HUNTER, I take a few liberties in offering a slightly fantastic theory of what the City of Seven Caves might have been, but I don’t think we can entirely rule out that there may have been a real place behind these myths.

The Smoking Mirror is actually one way of translating the name of the Aztec god Tezcatlipoca, and disks of polished obsidian have been found in both Mayan and Aztec archaeological sites and are associated with prophecy and sacrifice in their iconography. That association between mirrors and the ability to see into the past and future, or across great distances, is one found in other cultures as well. Remember Snow White’s wicked stepmother?

In the late 19th century, when Ellie and Adam’s story takes place, a great deal of Central and South America was still unexplored. The notion that the wilderness might be hiding big secrets wouldn’t have been at all far-fetched at the time. We’re still debating whether the Amazon might have been home to an as-yet-unknown civilization of millions of people. The world has gotten smaller since Ellie’s day, but that doesn’t mean it’s given up all of its secrets.

THE SMOKE HUNTER combines elements of several genres – thriller, historical romance, suspense, and science fiction. What made you decide to write a book that straddles so many categories?

To call it a ‘decision’ isn’t really accurate. THE SMOKE HUNTER started out as a romance novella. But before I’d gotten through two chapters, I realized I wanted the stakes to be much higher. The evolving romance between Ellie and Adam is just so much more fun when it’s happening in the midst of this great adventure, and I couldn’t resist the lure of all that juicy history and mythology. Of course, whenever you have a great power hiding somewhere in your story, there’s going to be competition to control it, and so I ended up with a pair of villains hot on my heroine’s trail.

Speaking of villains, Dawson is an unusual antagonist, a disgraced professor who feels terrible about some of the things he’s doing. What inspired his character?

Villains are a big issue with me. I think the “bad guy” trope is actually rather dangerous. It tells us that people who do harm are generally these greedy megalomaniacs. From what I’ve seen in history, that’s rarely the case. The most dangerous men are the ones who think they’re doing good, but start excusing the means based on the ends they feel they’re achieving. The man above Dawson—a figure we learn only a little about in this story—is a man like that. Dawson and his partner Jacobs are his instruments. Jacobs is the perfect soldier, a man who executes orders regardless of their moral consequences, simply because it’s his job. Dawson is a man who does possess a conscience, and who knows that some of the things he’s doing are deeply wrong, but he’s too terrified of putting himself in the line of fire to protest. He’s an intelligent, thoughtful man who is choosing to stifle his sense of morality to save his own skin. Whether that makes him sympathetic or even more worthy of contempt is up to the reader. 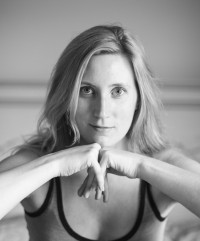 Jacquelyn Benson studied anthropology in Belfast, Northern Ireland, and wrote a thesis on paranormal investigators, spending four years living in a museum. When not writing, you may find her turning flowers into wine, herding an unruly toddler, or hiding under a blanket devouring pulp fiction.  THE SMOKE HUNTER is her first novel.

To learn more about Jacquelyn, please visit her website.