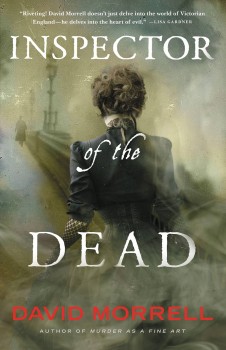 How can you tell if a historical mystery is going to be as exciting and suspenseful as any futuristic technothriller? Well, if it’s crafted by Thriller Master David Morrell, you can count on it. He proves that with INSPECTOR OF THE DEAD, brilliantly merging historical fact and fiction.

Set in Victorian England, Morrell’s latest novel brings us eye-to-eye with a killer who targets the highest levels of British society. To battle this brilliant murderer, Morrell plucks one of the most sensational personalities from the 1800s and brings him to vibrant life. That protagonist is Thomas De Quincey, whose notorious Confessions of an English Opium-Eater, was the first book about drug addiction.

“It made De Quincey so famous that for the rest of his life he was called the Opium-Eater,” Morrell says. “Because of his opium dreams, he theorized that the mind had caverns and abysses, layer upon layer, with secret chambers in which alien natures could hide undetected. Basically, he anticipated the theories of Freud by three-quarters of a century. In fact, he invented the word ‘subconscious.’ He also influenced Edgar Allan Poe, who inspired Sir Arthur Conan Doyle to create Sherlock Holmes.”

Adding to his accomplishments, De Quincey created the modern true-crime genre. In his On Murder Considered as One of the Fine Arts,, he dramatized the first media-sensation mass killings in English history, the shocking Ratcliffe Highway murders of 1811. Morrell says De Quincey’s blood-soaked depiction of those killings hooked him into writing about De Quincey.

“The premise of my first De Quincey novel, Murder as a Fine Art, is that someone uses his detailed essay as a blueprint for committing the murders anew,” Morrell says. “INSPECTOR OF THE DEAD continues De Quincey’s adventures when the Crimean War is raging. For a week, the shocking mismanagement of the war actually caused the fall of the English government. The premise of INSPECTOR OF THE DEAD is that someone uses this crisis as the ideal time to try to assassinate Queen Victoria.”

In reality, there were eight attempts to assassinate Queen Victoria, and Morrell incorporates elements of those attacks into his story.

De Quincey works with Scotland Yard detectives in the fascinating early days of crime-scene investigation, but even more interesting is the role played by his twenty-one year-old daughter, Emily, who provides an affectionate view of her opium-eater father, persuading readers to sympathize with him as much as she does. But writing from a female perspective can be a challenge for a male writer, and writing that character in a historical period is even harder, as Morrell says.

“I vividly remember how nervous I felt when I began Emily’s first-person part of the narrative,” he says. “If I couldn’t find a tone for her, there wasn’t any point in continuing. Then suddenly I heard this woman’s voice in my head—comical, independent, and irrepressible. I don’t know where that voice came from, but she’s a gift. She turned out to be the character readers most ask about.”

A great thriller also needs a great villain, and for that Morrell again turned to De Quincey for inspiration. In his groundbreaking essay, On the Knocking at the Gate in Macbeth, De Quincey wrote, “In the murderer worthy to be called an artist, there rages some great storm of passion—jealousy, ambition, vengeance, hatred—which creates a hell within him.” Creating an emotionally complex villain became Morrell’s goal in INSPECTOR OF THE DEAD.

“I wanted a fierce antagonist whose motives were, from his perspective, completely understandable and even admirable. My hope was that by the end, the villain would engage so much sympathy that his downfall would evoke pity as much as terror and perhaps even a hint of tears.”

Morrell, co-founder of the International Thriller Writers, has introduced dozens of fascinating characters since his iconic novel, First Blood was published in 1972. As explosively popular as Rambo became, and as influential as The Brotherhood of the Rose was to the spy genre, Morrell has seldom trod the same ground for long. He believes that careers can be shortened if authors stick with one thing. With a forty-three-year track record and other bestselling authors calling him the Father of the Modern Action Thriller, one might think he’s under a bit of pressure every time he sits at a keyboard. But Morrell isn’t tempted to take the safe path and stick to what worked before.

“I think the reason I’m still being read,” Morrell says, “is that with each decade I tried to find new ways of writing action and suspense. Often this involved risks. For example, some authors told me that I was making a mistake by leaving contemporary American subjects for Victorian England. They suggested that my readers wouldn’t follow me. But all I know to do is pick a topic that’s personally important to me, immerse myself in the research, and use techniques that intrigue me. With INSPECTOR OF THE DEAD, I tried to be new by going back to Victorian novels and re-imagining their techniques, doing my best to convince readers that they are truly on those harrowing, fogbound streets.”

So, just as Morrell reinvented the modern action thriller four decades ago, he has now reinvented the historical thriller, and his readers proved they would follow him into the past when Murder as a Fine Art was published. INSPECTOR OF THE DEAD is another reward for their loyalty.

David Morrell created the character of Rambo in his 1972 novel, First Blood. He is an Edgar, Nero, Anthony, and Macavity nominee as well as a recipient of the prestigious career-achievement Thriller Master away from the International Thriller Writers. His numerous New York Times bestsellers include the classic espionage novel The Brotherhood of the Rose, the basis for the only television mini-series to be broadcast after a Super Bowl. A former literature professor at the University of Iowa, Morrell has a PhD from Pennsylvania State University. His latest novel is Inspector of the Dead, a sequel to his highly acclaimed Victorian mystery/thriller, Murder as a Fine Art, which Publishers Weekly called ”one of the top ten mystery/thrillers of 2013.”

To learn more about David Morrell, please visit his website.