Features, Latest Books, Up Close
1 month ago
by Dawn Ius
1 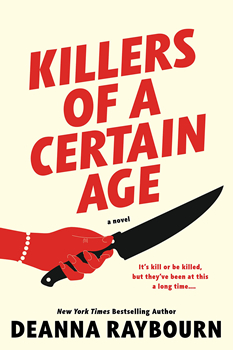 New York Times bestselling author Deanna Raybourn had her feet firmly planted in the past when her editor called with a challenge she couldn’t pass up: Write a book featuring an older badass woman.

Raybourn accepted the challenge and made it even more difficult. She created four badass women, made them assassins, and for the first time in her career, chose to write a contemporary novel.

The result is KILLERS OF A CERTAIN AGE, the story of four female assassins who have spent the last 40 years as ruthless killers for a clandestine organization called the Museum. Now, 60 years old and on the cusp of their retirement, they realize someone is hunting them.

But these are not women willing to go down without a fight. It’s kill or be killed in this thrilling—and yet humorous—novel from Raybourn, who proves that taking risks and upping the stakes, both on the page and off, can have killer results.

In this exclusive interview with The Big Thrill, Raybourn talks more about assassins, secret organizations, and why writing KILLERS OF A CERTAIN AGE meant taking the biggest risk of her career.

KILLERS OF A CERTAIN AGE has a fantastic premise—four 60-year-old female assassins on the cusp of retirement. I’m dying to know more about what sparked this story and the four formidable women at its core.

My editor called up one day and said they’d been having a discussion in the office about how few stories there were featuring badass older women, and my name came up as the natural choice to write one. I was hugely flattered that they thought of me. They told me I could write whatever I liked, and I decided it was time to take a monumental risk. I’d always written historical, but this was a chance to really push myself, so I told them I wanted to try contemporary. To their eternal credit, they let me. And they didn’t even flinch when I said I wanted to write about assassins. There are so many fun stories with men at the center, doing cool, action-y things with really high stakes—and there are no higher stakes than death. That’s where I wanted to position my characters. But I wasn’t interested in writing a lone-wolf story, so I developed four of them, which gave me the chance to explore their friendship and how you sustain a relationship with the same women over four decades when you hardly ever see them but something really deep and powerful connects you. Like a sorority—but with murder!

The women have worked for 40 years for an elite organization known as “the Museum.” What can you share about the inspiration for this clandestine group?

Like many of the official secret services in the world, the Museum was an offshoot of WWII. But where a lot of veterans of clandestine war work got official mandates to carry on, the characters who established my organization have very much gone rogue. They saw too much, and they trust too little, so they set up their own network to continue to hunt Nazis and perhaps recover some looted art while they’re settling scores. Over the years, their mission has changed a bit, but the group still makes it their business to take out folks who need killing—in their estimation, at least.

While most of the novel is told through Billie’s point of view, Mary Alice, Helen, and Natalie are all well-developed and are vital to the story. Whose character was the most fun to develop, and why? The most challenging? Do you have a favorite assassin?

I love them all! But I will confess a soft spot for Billie just because she’s my narrative character, and I got deeper into her head than anyone else’s. I gave her a Texas upbringing as a nod to my own background although our lives have utterly nothing in common. I did have tremendous fun developing the others. I’m sure Natalie would work my last nerve if I spent too much time with her, but I adore her just the same. And Mary Alice and Helen bring their own unique gifts and baggage to the quartet, although Helen’s baggage is vintage Hermès.

Female assassins seem to be making their way into pop culture more and more—shows like Killing Eve have elevated the role, and a few upcoming books, such as Heather Chavez’s 2023 release, Before She Finds Me, have a female assassin at the heart of the story. What was the allure for you?

I’m deeply interested in how elusive female assassins are; throughout history, they are vastly outnumbered by men. (How many articles can one person read about Charlotte Corday anyway?) We just aren’t accustomed to seeing women engaged in this work nearly as often as we see men. We do have female characters who are thoroughly badass—like the Atomic Blonde, Lorraine Broughton, or Modesty Blaise—but very often the death-dealing for these women is part of a larger career in espionage or crime. Or—in the case of La Femme Nikita or Villanelle—they’re largely forced into careers as assassins. I liked the idea of my characters being recruited, of them committing to the work for their own reasons but having the choice to do it. I thought it would be fun to play with—and it was!

The novel is told in two timelines: at the start of their careers as assassins, and then of course, 40 years later, on the cusp of their retirement. What was the most challenging part of this structure? What research was required in terms of setting the scene, or even describing their earlier work and training? Was there anything that surprised you in the research?

The research was intriguing. I wanted them to have a sort of boarding school meets bootcamp experience in a very specific place with a very specific sort of instructor. Once I established that, it was a matter of working backwards and figuring out how and where the instructor would have trained and how she would use that in her teaching. Her experiences in WWII were hugely formative for her character. She suffered tremendous losses, and she’s deeply unsentimental. She doesn’t care about coddling these new recruits or holding their hands, but she does care ferociously about making them the best she can, and that gives them something to live up to.

No question that this book is a full-on thriller—with a great espionage twist!—but you’ve also woven in some clever wit and humor. What do you think the role of humor is in thriller/crime writing? Why was it important to include in KILLERS OF A CERTAIN AGE?

I never thought about the role of humor in the thriller, only the role of humor in my work. I write books that have funny moments because I would absolutely perish of boredom if I had to do otherwise. You spend months and months with these characters; I can’t imagine never having a laugh with them! But I never even acknowledged this book was a thriller until after it was finished. I struggled a bit with how to categorize it because humor is so often associated with cozies or capers, but I love the juxtaposition of laughter with really serious things. And it felt a little presumptuous to claim that thriller label when that’s not necessarily how I approached writing this book, but I’m delighted by it.

Your previous novels have mostly been rooted in the Victorian era. What inspired the leap into the contemporary with this book?

Changing from a historical setting to a contemporary one was literally the scariest thing I could think of to do with this book. I knew from my first conversation with my editor that this was a huge, HUGE opportunity to take risks I’d never taken before—like a once-in-a-career opportunity. So I decided to push it as far as I could, not to limit myself by focusing on anything I was nervous about pulling off, but just to jump and hope the parachute showed up. And it did.

I can’t help but feel this book ended with the potential for a series. Is there another book in the works? If so, what can you share about it—and if not, what can you say about your next project?

All I can say about that is people are talking…

On that note, I could absolutely see this being a movie or a Netflix series. Who would you cast for each of the four women?

I admit this question causes me a tiny bit of despair just because I never want readers to think if they have a different actor in mind than I do that they’re wrong! But I will say that I kept a picture of Diane Lane taped to my computer while I wrote Billie’s scenes.