She Wants You to Know How It Feels 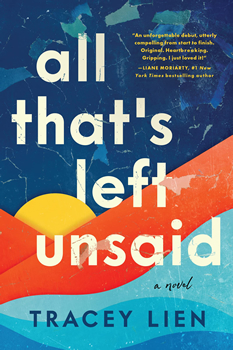 Insight into identity, community, and inherited trauma wraps around a murder investigation in ALL THAT’S LEFT UNSAID. In her powerful debut, former Los Angeles Times business reporter and author Tracey Lien dives deep into the realities of the refugee experience. She wants people to “know how it feels,” to experience the “sheer weight” of your community dismissing you because of what you look like and where you come from.

The Tran family have always believed they were lucky to escape Vietnam, eventually moving to the community of Cabramatta, outside Sydney, Australia. Ky and her brother Denny are star students, valiantly trying to live up to their parents’ expectations for them. Although they live through a heroin epidemic in Cabramatta, the drugs only affect the “naughty” people, which Ky and Denny are not.

Now grown and a journalist in Melbourne, Ky convinces her parents to let Denny celebrate his high-school graduation with friends at the Lucky 8 restaurant in town—it should have been safe enough. They are bewildered when someone murders Denny in the restaurant. How could that be? He was the perfect son and the perfect brother.

When Ky learns the police have no leads, that there was no one in the crowded restaurant who witnessed the murder, she knows the community is just not talking. They’re scared, but of what, she doesn’t know. She vows to talk to everyone who was at Lucky 8 when Denny was murdered—she’s sure she can get more information than the police. After all, the Vietnamese community has little trust in white policemen.

What Ky discovers takes her back to her childhood friend, Minnie, who’d been closer to her than anyone else but was swallowed by the dangerous streets of Cabramatta. When Ky finally identifies Denny’s killer and the reason behind it, she realizes that to survive, “sometimes you can’t just be good; sometimes you have to fight.”

Beautifully written, with the voices of the characters insisting to be heard, this literary thriller cries out for compassion. Here, Lien chats with The Big Thrill about her inspiration, model minorities, and her true-life experiences.

What was your inspiration for the story? 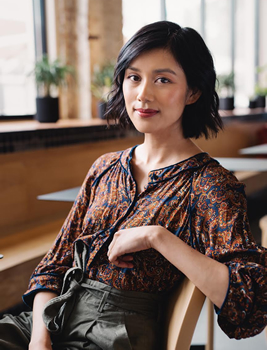 I didn’t set out to write a murder mystery or a literary thriller. But as I was conducting research on Cabramatta—reading news clippings and ethnographic studies from the 1990s—I found reports describing crimes committed in which the supposed witnesses claimed they didn’t see a thing.

In one instance, a knife fight involving a gang broke out at a community fashion show; two hundred people were present, but when the police arrived to interview the witnesses, they all claimed they didn’t see a thing because they were in the restroom during the fight. The venue only had two restroom stalls! These kernels inspired the fictional events I spun up in ALL THAT’S LEFT UNSAID.

What about your goal of “wanting people to know how it feels”?

It’s about challenging the myth of the model minority. Growing up in Australia, I was told that I was as Aussie as they come, that I belonged, that I’d get a fair go, and that Australia really values multiculturalism. But at some point, I realized this wasn’t true—it didn’t apply to me or to people who looked like me. I realized my citizenship was conditional—on my impeccable behavior, on my gratitude, and if I ever did anything to step out of line, I risked being perceived as a nuisance or, worse, a threat.

We’ve seen a version of this play out in the United States—Asian Americans, once thought of as the country’s success stories, were overnight seen as threats to public health and carriers of the “kung flu.” And so, although I wrote this novel to be a propulsive mystery, with each chapter bringing you closer to finding out who killed Denny Tran and why, I hope readers will also come to understand how it feels for my characters to be conditional citizens of Australia.

How is the novel about the real-world consequences of society dismissing and diminishing an entire group of people?

I wanted to depict the spectrum of dehumanization many Asian Australians (and, by extension, Asian Americans, Asians in Britain, etc.) experience because that’s ultimately what it is—when you’re not taken seriously, when you’re told to take a joke when you are the joke, when you’re confused for other people of the same race, when you experience the need to walk a tight rope in order to be accepted.

At best, it’s exhausting, and at worst, dangerous. In the former, there are characters in my novel who suffer from the daily paper cuts of discrimination. In the latter, a 17-year-old boy gets murdered at a busy Cabramatta restaurant, and no one but his family seems to care.

What percentage of the story do you think is based on your own experiences growing up in Australia, and specifically Cabramatta?

Cabramatta is home, so I wrote about it with all the complex feelings that people have about the place from which they came. But I think the predominant feeling I now have when I reflect on Cabramatta is that of love and appreciation. I was fortunate enough to have a safe and supportive upbringing that doesn’t bear a ton of resemblance to the experiences my characters have growing up in Cabramatta. I could write from a distance.

What specific message would you like readers to take away from the novel?

If readers enjoy the mystery and the thriller qualities of ALL THAT’S LEFT UNSAID, that’s enough for me. But the dream would be for readers to consider the idea that the model minority is a myth. People of color in Western nations are continually told if they work hard enough, behave well enough, are quiet enough, don’t rock the boat, and adhere to restrictive expectations, that they’ll be treated with fairness and dignity. And, frankly, it’s a lie.

The only hint I can give is that I am writing a next book!

If someone is looking for permission to write, then they can consider this permission. If you want to do it, just start. The thought of writing a novel intimidated me so much that I broke the process down to writing 300 words a day, every day, until I had something resembling a first draft. Some people write more, others less. The important thing is to take the first step and start.

Would you tell us something about yourself readers might not already know?

Before I became a business journalist for the Los Angeles Times, I was a video game reporter.