A Gripping Tale of Abuse in the Film Industry 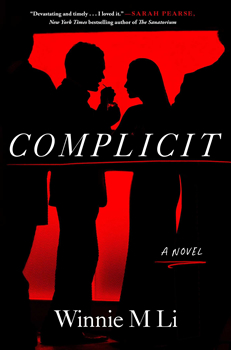 In her words, “Why bother going through the effort of writing a novel if you’re not going to take risks?”

She certainly embodied that with her emotionally taut and suspenseful debut Dark Chapter—which recreates her own sexual assault decades earlier. Though at times a difficult read, it’s a brave and unflinching novel, well deserving of the praise it’s received.

Li’s sophomore book, COMPLICIT, follows closely in her debut’s footsteps, this time drawing attention to another important issue: abuse of power in the film industry. Li knows a little something about that too.

Prior to her assault, Li was an up-and-coming film producer. While she didn’t share the same experiences as her protagonist in COMPLICIT, many of her industry peers have. And that is one of the reasons she wanted to write this book. The result is another hard-hitting novel of suspense that forces you to pause and reflect—and perhaps even assess whether you have ever been… complicit.

In this The Big Thrill interview, Li delves into why it was important for her to write these books, how they have helped her heal, and why she has fully embraced her new role as a novelist.

In your first book, Dark Chapter, you included a fictionalized account of your own sexual assault—in part, I know, to ensure you could do justice to the survivor’s experience. It was a bold and brave move. Your second book, the brilliantly written COMPLICIT, seems born out of the same urgency to address societal issues—this time silence and oppression. What prompted this story? 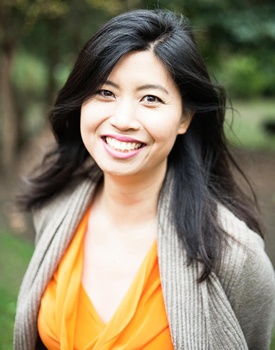 Ah, thank you for those kind words about Dark Chapter!  In a lot of ways, there was a natural bridge between my first novel and writing COMPLICIT. The Weinstein allegations broke in October 2017, shortly after Dark Chapter came out. Several people commented that as a rape survivor myself who once worked in the film industry, I might be “well-placed” to write a novel dealing with this topic.

But what really prompted me was hearing a comment from a friend, who said: “I don’t get it. If people knew Weinstein had been doing this to women for years, how was he able to get away with it for so long?” So what I wanted to do in COMPLICIT was show how and why professionals in a place like the film industry would turn a blind eye to that kind of behavior—and how that would create an atmosphere of tension, mistrust, and even betrayal that could continue to damage someone years later.

Obviously, the primary goal of a novel is to entertain, but your books dig deeper, giving the reader opportunity to pause and reflect on issues of real importance. You certainly don’t sugar-coat things (thankfully). What do you hope readers take away from COMPLICIT?

That behind the glamourous façade of the film industry, there’s a lot of hard work, crushed dreams, and even trauma. And yet, we remain enamored by the movies—we fall for the glossy, celebrity-driven spectacle, we still long to be mesmerized by big-screen blockbusters—even though the process of making those films can be so unjust and costly in many ways. I also wanted readers to consider that every one of the hundreds of women that someone like Weinstein or Cosby assaulted… every one of those women has their own story, their own career and life-path that got derailed because of a perpetrator who was allowed to continue abusing his power for years. It’s meant to be sobering, but also, in its weird way, to still celebrate the love of movies that so many of us have. 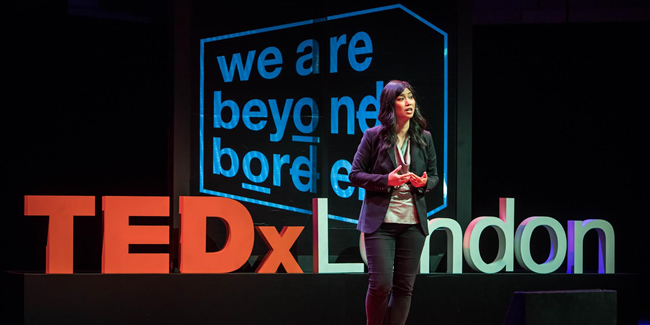 Li delivers a talk at TEDxLondon.

This is an emotional and raw book, dealing with some topical but difficult themes. How did you navigate your own emotions during writing the novel—and at the end of each writing session, what are some of the ways you gave yourself a “palate cleanser”?

As strange as it sounds, I didn’t actually find COMPLICIT to be that emotionally heavy to write. My first book, Dark Chapter, was much more challenging in that regard because it dealt so much more directly with my own experience of rape. But with COMPLICIT, I had a lot of fun, because it allowed me to relive the excitement of working in the film industry and really nerd out on movies. (To be honest, there were a bunch of film references in the book that I had to cut out because I had too many in there!) So I guess that was my approach: balancing the serious themes with a film industry setting that at first glance could seem fun and glamorous. There was only one scene that left me emotionally raw after writing it, but… I guess that’s a sign of it being an effective scene!

Prior to your assault, you worked in the film industry as a producer. Clearly that gave you a lot of material for COMPLICIT. How did your work in that industry prepare you for your new career as a novelist? What is the biggest myth about the industry you think persists despite all the negativity often surrounding “Hollywood”? 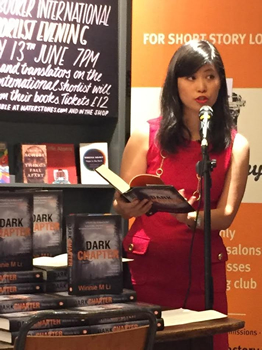 Li reads from Dark Chapter at Waterstones in the UK.

Funnily enough, when I was working as a producer, I had been trying to write a novel on the side—so I think I had always longed for the depth and complexity of fiction writing, which you often can’t achieve through screenplays. But filmmaking and novel-writing are both forms of storytelling, and in both art forms, you develop an instinct for involving your audience in a character’s journey. Working as a producer also taught me how to network with professionals and pitch a creative project—skills which aren’t so much tied to the craft of novel-writing but with the publishing industry side of things.

Hm, biggest myth about Hollywood… If you just look at social media and the glossy film publicity, you might think filmmaking is all about exciting moments on set, super-wealthy stars partying and vapidly swanning down red carpets. But in reality, there’s an incredible amount of precision, hustling, and talent that goes into making a movie—waking up at 4 a.m., shot lists that need to be covered each day, scripts that get written and re-written. There are so many skills behind the scenes that are rarely recognized.

Your protagonist, Sarah Lai, has a truly passionate love of movies. How much of her is a mirror of yourself? Do you remember the first movie that made you want to be a part of the industry? Given your experiences with that industry, has it tainted your love of film? Is there a recent movie that blew you away? 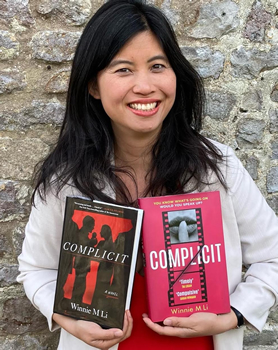 Li displays both editions of COMPLICIT.

Sarah is like a more bitter, more ruthless version of myself. I didn’t have her same upbringing and thankfully, didn’t end up in the same work situations as her. But she has the same love of film that I’ve always nurtured all my life. I don’t think there was a specific film that made me want to work in the industry. I just always loved movies, and then at one point in my early 20s, I realized: “Wait, people have careers in film? You can earn a salary making movies?” And even though, sure, I am a bit cynical from my time working in the industry, I still get swept up by the magic of sitting in a movie theatre, watching the opening credits on a big screen. That’s the irony I was trying to capture in COMPLICIT: that you can still be completely enamored by cinema, even though you’re bitter about the industry.  So for me as a young kid, The Wizard of Oz was that truly magical film that played on TV every Thanksgiving and swept me away to a more enchanted world. More recently, I guess I can say Denis Villeneuve’s version of Dune did it for me.

We often tell people, “If you see something, say something.” But in practice—as we are reminded in COMPLICIT—trusting our gut or speaking out is easier said than done. Why do you think that is—and what do you think needs to change for us to be more vocal? To not ignore the warning signs?

I think we live in a culture where we’re often expected to be smart and independent. To rely on ourselves and build our own success. But the reality is, we live in a world where there are unequal power structures, and especially when you’re a young woman, you don’t want to appear too helpless or weak in those kinds of environments. You want to appear capable. So you tell yourself that you can handle this, it’s not that bad. All these thoughts to minimize the problem (the abuse, the bullying, the violence, you name it), which ultimately end up silencing your own instincts and enabling a perpetrator to continue abusing others. And then years later, we still blame ourselves for not speaking up, when we were always in a situation where the odds were stacked against us. 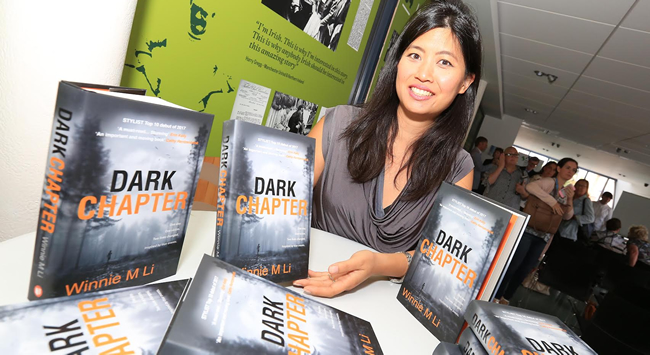 Li makes a stop at the Culturlann Arts Centre in West Belfast during her Dark Chapter book tour.

Oh, writing these books helped for sure—they ultimately got me the career as a novelist that I’d always dreamt about!  I don’t know if I’d use the word “cathartic” for writing a novel, as it’s such a drawn-out process. But I would say writing each of these enabled me to thoroughly explore a scenario that was linked to my own life experience. And use my imagination to create something positive (a novel that others will read) out of less-than-fortunate circumstances. Which is a form of healing in its own way.

My next novel is about a road trip across America. I’ve always loved travel, but after the lockdown and recently becoming a mother, I haven’t had a chance to travel very much.  So I decided my next novel would be about a road trip—which I researched last autumn, when I drove Route 66 with my toddler and partner. It’s early days yet, as the novel won’t come out for a while, but I’m looking forward to writing more of it!