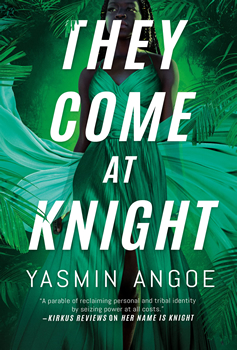 Yasmin Angoe needs noise to write. Not people noise, at least not the live kind. But the kind that drones on in the background—a TV show, the radio, music for particular scenes. Coffee shops are out of the question—too many distractions. But absolute silence? Not a chance.

“I cannot write in absolute silence,” she says. “So I’ll throw on some random series to run while I write. And when I stop to think or take a break, I can just turn my chair to ‘cleanse my palate’ for a few minutes and then get back to it.”

Clearly it works. Background noise is what fueled Angoe’s groundbreaking debut, Her Name Is Knight, and its brilliant follow-up, THEY COME AT KNIGHT, which releases this month. The second installment in the Nena Knight trilogy finds our beloved assassin once again fighting for her family, this time against a new threat much closer to home.

Nena and her team are tasked to root out the danger—but this time, the enemy is not at all who she expects.

In this interview with The Big Thrill, Angoe shares insight into how she makes a potentially unlikeable character come to life and what readers can expect from her in THEY COME AT KNIGHT. Hint: A lot of bad-assery.

THEY COME AT KNIGHT is a brilliant follow-up to your debut, Her Name Is Knight, and continues to demonstrate just how bad-ass Nena Knight is. How easily was it to slip back into character for this book, and what do you think is the most important change for Nena as we dive into this latest adventure? 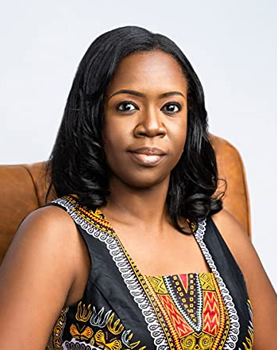 It was very easy to slip back into character for THEY COME AT KNIGHT because Nena never left! She still had a lot of story to tell and went on vacation for a little bit for some self-care, but when she was ready to talk to me about her story again, she came back full force. Seriously, I love her story and what she’s about and just how very cool she is so much that it’s easy for me to slip back into her world to see what she’s up to and what she wants to share with the rest of the world. The most important “change” for Nena for this book is acceptance of the new people in her life and the parts they play and acceptance of herself because she’s lived with her past for so much time. Now she has to accept what’s happened and move on so she can find happiness and resolution for herself. If that makes sense.

Yours is actually the second book featured in The Big Thrill this month with female assassins working for a secret organization—Deanna Raybourn’s Killers of a Certain Age is a fun twist on the trope. But it’s indicative of a trend I’m seeing: female assassins making their way into pop culture in a big way. Why do you think this type of character resonates with readers and viewers?

I don’t know about everyone else, but I have always loved seeing women and the underrepresented in roles we don’t normally see them in. I find it powerful. And while the job of “assassin” isn’t an ideal or likeable job, I think we all have had, or have, jobs that weren’t ideal or likeable, and as women, we’ve made do with what’s been given us the best we could. And we rocked at it. These books are the extremes of unlikeable jobs readers can relate to, but the feeling is relatable. And I think because Deanna’s assassin and mine are women who are unapologetic and fierce, it really hits with readers. It certainly does with me! Reading about or watching a bad-ass woman doing what she has to do with no apologies and doing it well… Whew, that’s sexy! Don’t you think? 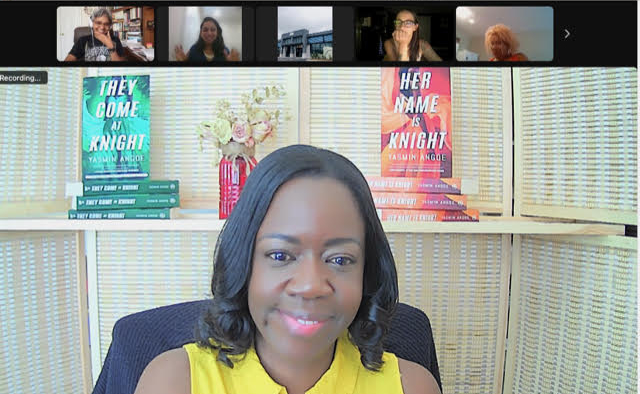 Angoe talks about creating characters that resonate with the Writers Beyond Borders group of the South Boulevard Library in Charlotte, North Carolina.

Aside from Nena, who is your favorite bad-ass female character?

If we’re talking books, then Luke Jennings’ Villanelle from Codename Villanelle. In movies, it’s all the female assassins in Kill Bill and Mary in Proud Mary. There are more, but I can’t think of them at the moment. And if I’m really honest, my bad-ass female characters really come from all the bad-ass women in my family and friend groups. Their strengths are what I fuse into my female characters.

It’s a tricky balance to make an assassin likeable—and yet, you absolutely succeed with Nena. How do you strike that balance to ensure readers sympathize with her, but also respect her job? 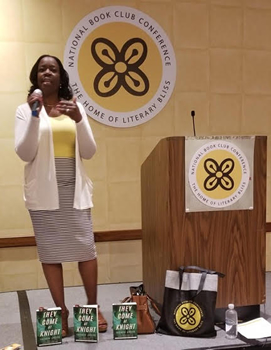 Angoe speaks about her journey to becoming an author as one of the featured authors of the 2022 National Book Club Conference in Atlanta.

Well, like I touched on earlier, there are jobs out there that we all don’t like, but someone does them because it needs to be done and they have their reasons for doing it. Her Name Is Knight was Nena’s origin story because the reader gets to learn how she became an assassin, and most of all why. It’s the why that makes an unlikeable thing like being an assassin understandable. So readers don’t have to like what Nena does, but they have to understand. And I think they understand because Nena is not only a killer, but she has a code. And she has a heart. She thinks about her actions and their repercussions. She worries. She fears. She loves and is vulnerable at times. But she still handles her business and does it with pride. I think because readers can understand all those parts of her, they are a little more forgiving about that little ole assassin thing.

Sophomore books are notoriously hard to write—and in addition to that, we’re in the midst of a pandemic. What challenges did you face while writing THEY COME AT NIGHT, and more importantly, how did you overcome them?

Yeah, that sophomore slump (I think that’s what it’s called) is no joke. I was terrified when writing this book. I’m apprehensive now as it’s coming out because I hope I met everyone’s expectations that were set with the first. Plus, I wrote TCAK while HNIK was still in the editing phase. The first book hadn’t even come out yet for me to know what worked and what didn’t with the readers. So I was writing blind, off what I thought would work the best in how I’d execute the format and the type of story I wanted to tell. I love how THEY COME AT KNIGHT turned out, and I think the readers won’t be disappointed. 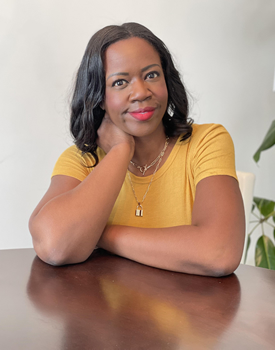 What is the one thing you would like readers to take away from your books, aside from a great (page-turning) read?

I want readers to enjoy these stories where the characters may not look like them or be where they’re from, but still relate to what the characters are going through. I’d also like the readers to come away thoroughly satisfied that they had a fulfilling read and are hungry for more. I love when readers tell me that reading the book put them through intense emotions. That’s the ultimate compliment. If you go through it while you read my books, then I’ve done my job as your storyteller.

I understand there’s a series adaptation in the works by Endeavor Content and Ink Factory. Is there anything you can share about where you’re at in the development stages?

I wish I knew something to tell you! The only thing I know and can say is that the scriptwriter is working on the script and that it’s looking good. I can’t wait to see what they do with Nena and her world.

Action scenes can be tough, but you seem to navigate them with ease—which is good since given Nena’s job, action is necessary and expected. What advice would you give to writers who are trying to craft authentic action scenes? 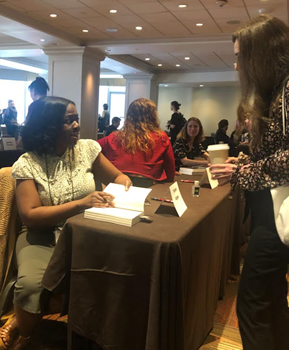 Angoe signs books at ThrillerFest in 2022.

That’s a tough one because it’s a little subjective. When I’m watching a TV show or a movie, I expect the action scenes to be wild and unbelievable. But when I’m reading it, I want it to make sense. Because I’m imagining the scene in my head as I read. I write action scenes that make sense to me, so I’m not thinking, “Now how the hell did they do that? How are they not tired, not hurt after taking those hits?” I try to make my scenes believable for me, so that means Nena isn’t going to fly trapeze-style through the air or leap off planes. (She’d never agree to it.) She’s going to stick to the weapons and fighting style she knows. She’s going to get hurt and feel it for days, weeks later. She’s going to continue to train so she stays up on her game.

I watch a lot of action scenes to give me a vibe (because I am NOT a fighter). I watch videos of fighting styles and ask my friend who’s a black belt in karate. When I write my scenes, especially the hand-to-hand fight scenes, I’ll actually act it out to see if it works. I’ve even enlisted my kids to help me act it out. They think I’m weird, but now after the first book, they get into it!

This series is billed as a trilogy, so we know there’s (thankfully) a third book coming. What can readers expect this time?

With Book 3, which I just turned in to my editor, the readers can expect Nena in a position she doesn’t really care to be in. (That’s all the books, right?) But the issue she’ll have to deal with will be one that really pushes her beyond her realm of comfort and really makes her question things about herself.