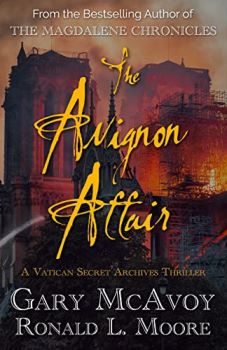 A 700-year-old body is discovered in a hidden crypt buried deep beneath the burnt embers of Notre-Dame Cathedral during reconstruction after its disastrous fire. Presumed to be that of a bishop from the 14th century, two parchment scrolls had been secretly sewn into the man’s preserved garments—documents that could spell a royal upheaval for modern-day France.

While the country is in great political turmoil—with rival factions laying claim not only to the presidency but to the republic’s royal heritage—the French government calls on the Vatican’s own Father Michael Dominic to extract and learn what secrets the parchments may hold.

But when they lead him to the tomb of Pope Clement V, the priest discovers yet another set of shocking documents with hints of a vast treasure the pope had buried before he died in 1314. When a prominent figure seizes the seat of government by force, it’s now up to Michael, Hana, and Marco—along with their trusted Swiss Guards—to act.

The tragic fire at Notre-Dame de Paris Cathedral provided an inspiration for my main character, Father Michael Dominic, to discover secretly hidden documents from among the embers beneath the church’s foundation.

Much of it is based on actual historical fact, upon which I build fictional elements so intricately woven that readers are always challenged to distinguish fact from fiction.

Robert Ludlum, Michael Crichton, James Rollins, Truman Capote. The plotting and pacing of books by these authors offer inspiration to any writer of thrillers.

Gary McAvoy is the author of several books including his bestselling thriller series The Magdalene Chronicles, and his newest series, Vatican Secret Archive Thrillers. His nonfiction work And Every Word Is True has been hailed as a sequel to Truman Capote’s landmark book In Cold Blood. Gary is also a professional collector of ancient manuscripts and historical documents, much of which informs his writing projects.