Murder Kicks Off Eighth in Series 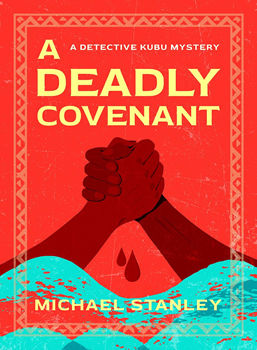 Michael Stanley is the writing partnership of Stanley Trollip and Michael Sears. Their mystery series features a large detective in the Botswana Criminal Investigation Department whose nickname is Kubu. The New York Times said of him: “Kubu is also hugely appealing … We may be attracted to Africa by the scenery, but it takes a great character like Kubu to win our loyalty.”

The latest series installment—Stanley’s eighth—A DEADLY COVENANT is a prequel set on the Kavango River in north-west Botswana and starts with the discovery of a long dead Bushman skeleton that turns out to be one of a group of murdered Bushmen.

As a big fan of uncovered or unsolved mysteries from the remote past, I found A DEADLY COVENANT completely intriguing and engrossing and the Bushman scenes fascinating. Kubu seems ever more incisive than his first outing as a detective in Facets of Death. Vividly painted scenery—and you can feel the oppressive heat. Talk about Sunshine Noir!

In this exclusive interview for The Big Thrill, the authors share further insight about A DEADLY COVENANT and their series protagonist, Kubu.

I’ve always been curious whether the Kubu character is based on a person or persons you know. He has particular features that make him stand out, especially his size, which belies a certain degree of psychological vulnerability.

Kubu isn’t really based on anyone. He wasn’t even intended to be the protagonist of a series. In our first book, A Carrion Death, an ecology professor discovers a dead body in the desert and rapidly deduces that the victim was murdered. Since we were both academics when we wrote the book, we thought the professor would be our protagonist because we were told you should write what you know. However, because a murder was involved, we needed a police detective to investigate. 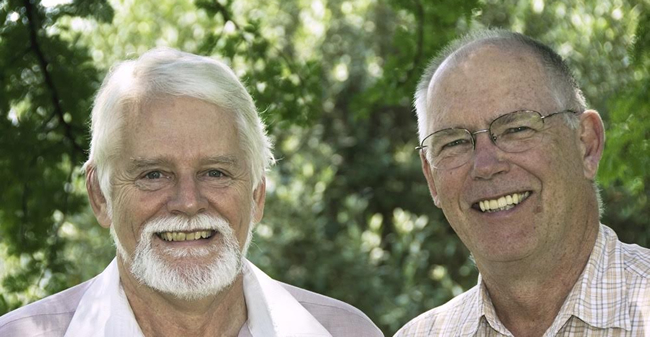 So Kubu climbed into his Land Rover, well supplied with food and drink for the trip, and set out from Gaborone into the desert. Along the way he sang (badly) and thought about how his experiences with an early Bushman school friend had encouraged him to look below the superficial, to be observant. That and his love of puzzles eventually persuaded Kubu to become a detective. By the time he arrived at the crime scene, he’d taken over the lead role and shoved the ecology professor aside. So in some odd way, Kubu actually invented himself.

One issue with how that transpired was that we hadn’t thought out Kubu’s backstory very well. We tried to rectify that in Facets of Death, the first novel featuring Kubu as a young detective having just joined the CID. As you point out, he was already smarter than the other detectives, but his relationships (especially with his future wife) were very tentative. That seems right since he would have been teased about the very large size that led to his nickname Kubu, which means hippopotamus in the local language.

Assistant Superintendent Mabaku, a tough, smart, and likeably irascible character, acts as Kubu’s mentor in A DEADLY COVENANT. Is he responsible for “everything Kubu knows”? How does their relationship evolve over the years of their association?

Certainly Kubu looks up to Mabaku and learns a lot from him. In this book, he starts to think ahead even of Mabaku and, at that point, their relationship changes a little. Kubu becomes more confident about his detection abilities, and Mabaku starts treating Kubu as a colleague rather than a subordinate and begins to use his nickname for the first time.

Elephant in the sunset

Do the Kubu novels accurately represent the degree of progress of the Botswana/Gaborone police service? It seems considerably more advanced than the Ghana Police Service I write about in my own novels—for example: designated interview rooms, good forensic resources, and so on. In the same vein, what’s the status of police corruption in Botswana? In Ghana, it’s a raging issue.

A very interesting question. Botswana is probably the least corrupt country in Africa. Botswana was never a colony (it was a British Protectorate at the request of its leaders until 1960), and we think that was an important factor in maintaining the traditional values of the Tswana people. Another factor is that its major foreign currency earners are diamonds, tourism, and beef exports. None of those looks good if corruption is involved. Botswana also obtains significant aid from the European Union, and that comes with strict anticorruption strings attached. While it would be silly to claim that there is no corruption—in the police service or more broadly—our experience at least suggests an honest and well-managed country. We wish we could say as much for South Africa!

The CID in Botswana is well equipped and follows modern police methods. However, it does sometimes ask for assistance both from the South African Police Service in Pretoria and Scotland Yard in London. It’s important to remember, however, that Botswana is a big country (about the size of France) and there is much less development outside the capital. For example, in A DEADLY COVENANT, the pathologist has to drive a dead body a hundred miles in an ordinary vehicle to reach a hospital where he can do the autopsy.

Your account of a Bushman called Selelo is quite fascinating. Are Bushmen of special interest to you? Accounts of Selelo’s communication with the ancestors and the story of another character’s communion with a “lesser” god are also intriguing. Is inclusion of supernatural phenomena and beliefs, muti murders, and superstitions a feature of what we have been calling African mystery or “Sunshine Noir”? 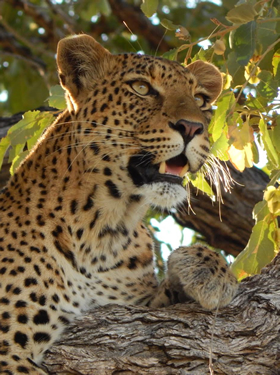 Leopard in a tree near the Kavango

We have been interested in the Bushmen and their cultures for a long time. Their approach to life is so different from the Western model that it makes one stop and think about one’s own values. Their incredible ability to survive in the harshest desert environments relies on their approach of sharing resources, for example never drinking all the water at an oasis but leaving some for the next thirsty group. We also keep returning to the conflict between the Bushmen and the other peoples of the area in our novels.

We feel that in order to understand another culture, you must be willing to explore its belief system even if you can’t accept it yourself. People behave on the basis of what they believe irrespective of whether or not it agrees with physical reality. It follows that if you write about a culture where some of the characters have supernatural beliefs, and even experiences, these need to be included to help explain their actions and motivations.

So, yes, we do think it’s part of “African Noir” if you like.

Without giving anything away, one scene involves some “wildlife” action. This is also featured in some of your other novels, not to mention that Kubu’s name means “hippopotamus” in Setswana (interesting story of how that came about). I know you are quite drawn to the region’s wildlife, but I can’t gauge if Kubu feels the same way. At best, he seems neutral. How knowledgeable or proud of Botswana’s wildlife is the average urban Motswana? For instance, I suspect that in Ghana, many citizens don’t know (or care, for that matter) that strong populations of elephants exist in the country’s northern regions.

It’s sometimes said that setting is a character in its own right. That’s true of Botswana, certainly in our books. The Kalahari Desert, Okavango Delta, the magnificent wildlife, and varied peoples all make a mystery story more unusual and intriguing. Wildlife has featured in some way in most of our books, starting in Chapter 1 of A Carrion Death, where a game ranger stumbles across a human body being eaten by a hyena.

Sunset over the Kavango

The Batswana are very proud of the natural attractions of their country and aware of them in general terms. Having said that, most of the people you see exploring these areas are foreign tourists. We guess this is more because of the cost and large distances involved than in lack of interest. However, the small game reserves near Gaborone have lots of local visitors. Certainly a country needs local involvement in wildlife preservation if it is to carry on into the future.

Some of Kubu’s mysteries involve more than one murder. I believe in your debut novel, A Carrion Death, I counted four or more. Are you particularly fascinated by multiple-murder cases, or is it more a means of deepening the mystery while moving it forward—or backward—as the case may be?

Michael Sears: I think it’s both. Somehow, the number of murders increases the tension and, of course, the pressure on the police. It’s equally true that it can supply a surprise for the reader, who is busy getting their head around one murder and suddenly the story goes off in what appears to be a different direction but can’t really be unconnected with the rest. So my answer is yes to both options. 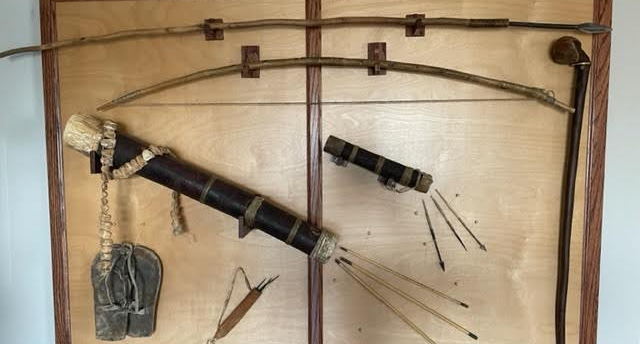 Some items from Stanley’s Bushman kit

Stanley Trollip: I think you are optimistic to count only four murders in A Carrion Death. Whenever we were uncertain where the story was going, Michael’s solution was to kill someone. And since it was our first book, we were uncertain a lot! Eventually, I had to point out to him that Botswana is a sparsely populated country and that if we carried on killing people at that rate, we wouldn’t have enough people left for a series! He calmed down a bit after that, and in the second book, we killed a few foreigners, which helped to preserve the local population.

Finally, tell us what goes into the Steelworks drink Kubu enjoys, and what it tastes like.

It has a delicious, tangy freshness, and since it’s non-alcoholic, Kubu can enjoy it on duty as well as in the evening. Here’s a recipe from Kubu’s KUkBUk A Taste of Africa: 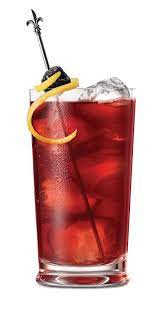 In a tall glass mix:

A generous splash of Angostura Bitters

Top up with ginger beer (not ginger ale).

(We have been told that some people add vodka for a buzz.)