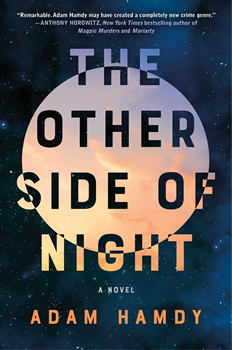 Acclaimed author Adam Hamdy accomplished a task many would love to emulate—he burst out of the corporate world and into the literary universe with his Pendulum Trilogy, and guess what? He’s never looked back. In fact, as a lifelong reader and writer, he followed up his successful trilogy by penning a new series featuring protagonist Scott Pearce with the release of Black 13 and Red Wolves.

Hamdy’s skill with the written word and his vivid storytelling even captured the attention of James Patterson, who brought Hamdy into the ever-expanding Patterson universe to co-write novels in the Private series.

Fast-forward to 2022. Instead of giving his fans another solid entry in the political thriller-suspense world, Hamdy shifted gears and wrote what he describes as a “speculative fiction” titled THE OTHER SIDE OF NIGHT. While it might be a cliché to say you must read this book to appreciate it, with this release, it’s true. I had the privilege of receiving an advanced reader copy at the end of 2021, and I think my blurb speaks for itself: “A mesmerizing tale of love, loss and the human condition, certain to transport readers while simultaneously transforming their imaginations… it’s guaranteed to be among the classics you’ll read time and time again.”

Since we don’t want to give away too much about THE OTHER SIDE OF NIGHT, let’s see what Hamdy has to say as he answers 20 questions for The Big Thrill’s Behavioural Analysis Unit.

Writing. I love being able to explore different lives and inhabit other worlds.

I don’t have any, and I don’t mean that in a boastful way. If a lion or a man with a knife came at me, I’d have a fear response. It’s natural and a healthy impetus for action. But I don’t lie awake at night worrying about anything. Growing up in a poor family teaches resourcefulness. Whatever life has in store, one usually finds a way through it. And many fears are ultimately rooted in a fear of death, which happens to us all in the end. So it’s nothing to fear really, just part of the journey.

I find it difficult to conceal how I’m feeling. I remember studying Antony and Cleopatra and thinking I was doomed. Shakespeare portrayed Antony as someone who lived his life through emotion, while Caesar played his cards close and didn’t reveal his true feelings. I think Shakespeare was right; we live in a world in which Caesars win.

Dishonesty. I can cope with good news or bad, but without truth, it’s hard to know where one stands. Twenty percent more honesty in the world would probably solve 80 percent of its problems.

Hanging out with my wife, Amy, on the beach, chatting, watching the kids having fun in the ocean.

I’d be doing something in healthcare. There has been an explosion of new technology that will facilitate a massive leap forward in prevention and treatment of disease and increase quality of life and longevity. Tremendously exciting field to be part of right now.

So many to choose from, but probably as an undergrad, being drunk, walking along Oxford High Street shouting, “I may be drunk, but you can’t see me because I’m invisible,” at one of the senior tutors of my college.

I don’t think it’s happened yet.

I have a favorite chair on our veranda where I like to sit and have an espresso and chat with Amy. We watch the birds in the garden and listen to them singing.

Honesty. Competing interests mean people can’t always be loyal or there for you, but they can always be honest.

I’m friends with too many writers to pick favorites among the living, so I’ll restrict myself to those who are no longer with us. Chester Himes, John Wyndham, Alexandre Dumas, Emily Bronte, Jane Austen, Maya Angelou, James Herbert, Tom Clancy, Philip K. Dick, Hunter S. Thompson, Tolkien—I could go on and on.

Elrond. Warrior in his early years, wise counselor in the latter. Long life, a touch of magic, gets to live through troubled times, but survives long enough to see the world heal, and ends up in the Grey Havens retirement village, where I hear they have nightly chess tournaments, and the bartender knows how to make a mean margarita.

I’m inspired by far too many people to mention them all, so I’m going to restrict myself to two. The first is Rudi Vrba, the author of I Escaped from Auschwitz. He is the embodiment of determination and struggle against the odds. The second is Dr. Deepti Gurdasani, a doctor and scientist who has shown courage throughout her career, a commitment to honesty and truth even when it’s uncomfortable, and who is one of the smartest people I’ve ever met.

I think I eat too fast. Maybe I spent a past life in prison or something.

Character. Everything starts with character. It’s taken me years to understand what that really means.

Know your destination but be prepared to take more scenic detours. So a plotter with some pantsing allowed for a better route.

Now you’ve gone and done it. Making me pick between colleagues. I’m going to say David Mitchell because I admire his skill with character and diversity of genre.