Readers around the world know Meg Gardiner thanks to her bestselling psychological suspense/thrillers. Gardiner has the uncanny ability to keep her devoted fans turning the next page, while wondering what twists she will throw their way next.

Since the publication of her first novel, China Lake (2002), Gardiner has gone on to win many awards (starting with an Edgar for her debut) and grow her fanbase, as well as attract Hollywood attention—Amazon Studios is set to develop a one-hour drama The Dark Corners of the Night, based on the third novel in Gardiner’s UNSUB series.

And of course, there is a subset of fans who also know Gardiner from her Twitter account, where she highlights news stories posted online regarding people who make less than intelligent decisions as they go about their daily life. In particular, people who live in Florida show up on her Twitter feed with regularity—maybe it has something to do with the heat and humidity?

Gardiner is sure to gain a new legion of fans on August 9th when HEAT 2—the book she co-wrote with director, producer and screenwriter Michael Mann—hits bookshelves. Gardiner and Mann use the events of the iconic movie Heat to craft not only a prequel, but also a sequel to the cinematic masterpiece.

Gardiner may be a three-time Jeopardy champion—for real—but how will she fare when she’s faced with The Big Thrill’s Behavioral Analysis Unit and our 20 questions? Read below to find out!

Sitting around the kitchen table with my family, laughing and sharing good conversation over a good meal.

I pour all my fears into my books. Read ’em and weep. And shudder. And gasp. In a good way!

My joy at making readers weep, and shudder, and gasp.

I also love making them laugh and cheer. So maybe it evens out.

Cruelty, both deliberate and negligent.

Trivia. I could defeat the devil at Jeopardy!

Playing word games (looking at you, Quordle). Get me started, and I’ll keep going, endlessly, like a lab rat pressing that lever.

A teacher. I’ve taught for years, love it, and would find fulfilment teaching full time. 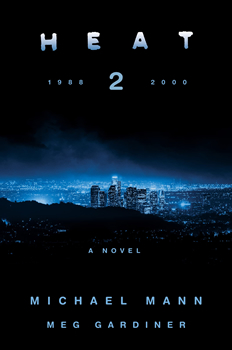 While watching the climax of a tense television episode, I waved my arms and shouted, “Something bad’s gonna happen!” And I jabbed myself in the eye.

I then had to explain to the emergency room nurse that I’d scratched my cornea by flailing and yelling at my TV.

Here are words I never expected to overhear while waiting in an ER at 12:30 am: “Which room is the Breaking Bad woman?”

Lesson: Fiction is powerful stuff. And, because people always ask: the episode was “To’hajiilee.”

Three children who have grown into loving, brave, adventurous adults.

Aside from my kitchen table? London—where our family lived for many years. To paraphrase Samuel Johnson: When you are tired of London, you are tired of life, “For there is in London all that life can afford.”

If I start listing them, I’ll never stop. I’ll just say: Nothin’ but love for all y’all.

Bobbie Draper in The Expanse series.

People who do what they can. It’s more difficult and courageous than it sounds.

Reflexive snark. That, or my fanatic love of Milanos and Diet Coke.

Plotter. If I ever wing it, I end up wallowing in a swamp.

Fall seven times, get up eight.