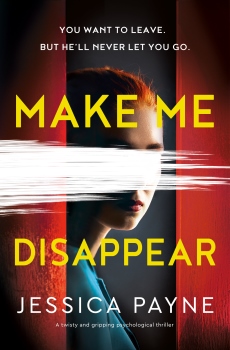 Dr. Daniel Ashcroft was perfect: handsome, romantic, protective. I thought I was so lucky.

But then I heard the rumors about his previous girlfriend, that she had vanished without a trace. That’s when I found the cameras in my apartment.

I was trapped. Daniel made it clear I couldn’t leave him, not without risking everyone I loved. I had to disappear, so I arranged my own kidnapping.

I should have known Daniel would never let me get away that easily. But he could never have predicted what I’d do next…

The thriller genre is meant to entertain, but it also carries important human truths like the desire to love and be loved. This book is for anyone who can identify with a relationship that feels good in the beginning and looks normal on the surface but evolves into something sinister. Sociopaths and narcissists walk among us, and they’re harder to identify than most people realize. We must be compassionate with ourselves.

The opportunity to create complex characters in complicated situations… life is complicated. Getting to delve into the minds of a variety of types of people is fascinating. And in the end, I love the push and pull the author and reader share—giving some information, but not too much. Hoping by the end the reader looks back and wonders how they didn’t see the twist coming, and yet the author “got them” nonetheless.

MAKE ME DISPPEAR is written in dual point of view, with Noelle, a Seattle nurse, desperate to escape her sociopath boyfriend. Meanwhile, Daniel’s point o view is written in a creepy second person that will remind you of Dexter or Joe Goldberg in YOU. He’s been a favorite among readers.

Jessica grew up in Kansas City, later moving to the Pacific Northwest, where the mountains and Puget Sound became home. Beyond writing, she loves to run, rock climb, and explore the great outdoors with her daughter and husband. She is also an RN. When holding still, which isn’t often, you’ll find a book in her hand and a cat or dog in her lap. Jessica writes suspense and thriller and is the host of #MomsWritersClub on Twitter and YouTube.