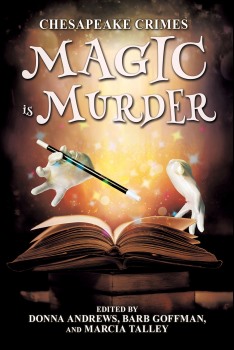 Mystery and magic collide in this thrilling, all-new collection of sixteen short stories by some of the top talents in the crime-writing field. Tales of fantasy worlds and stage illusion, of magic-users and magic-abusers, fill these pages with a heady, deadly mix. MAGIC IS MURDER is the tenth volume in the Chesapeake Crimes series. Every prior volume in the series has had at least one story that won or was nominated for the Agatha, Anthony, Derringer, Macavity, and/or Thriller awards. MAGIC IS MURDER was edited by Donna Andrews, Barb Goffman, and Marcia Talley, all of whom have won major awards in the mystery short-story field. More than half the authors in the book are ITW members: Greg Herren, Smita Harish Jain, Tara Laskowski, Adam Meyer, Alan Orloff, Shari Randall, KM Rockwood, Marcia Talley, and Stacy Woodson.

We hope readers will come away entertained, having been reminded of their love for reading about magic and its mixture with mystery and crime. We have some stories that are touching, some that are dark. Some of them are creepy and others are fun. By providing an assortment of magical characters and human ones caught up in paranormal happenings (as well as a stage magician caught up in a police investigation and a snake charmer caught up in his web of lies), we think we’ve created stories that will be remembered not just for their magic but also for their heart.

When we came up with idea of combining crime and fantasy in a book of short stories, we knew we had something readers should love. Being able to tell a gripping story in about 25 pages or fewer, and then providing sixteen such tales in one book, is like offering readers a big bag of potato chips. They’ll get to eat one delicious chip and then another and another and another, each one just as tasty as the prior one. But by encouraging our authors to include dipping their pens into fantasy worlds, we upped the fun quotient even more, for them and for readers. What could be more entertaining—and attractive—than that?

In MAGIC IS MURDER, we provide 16 stories from authors who have won or been nominated for nearly every major award in the mystery genre, and we feel confident regular crime-fiction readers will love delving into all of these tales. But we also hope this book will attract readers of fantasy. For many, fantasy lured them into reading as kids, especially stories about wizards and witches and all things magic. We hope our cross-genre collection will entice people who loved reading (or watching) fantasy as kids—or even as adults—to check out our book. We believe they’ll see that crime fiction, especially crime short stories, can be up their alley too.

Witches and wizards, transfigurateurs, and ghosts. They all make an appearance in MAGIC IS MURDER. In these pages you’ll also find crime stories with vodou spirits, a truly magical Magic 8-Ball, lots of other charmed objects, and even some mortals who claim to do magic—but maybe it’s all an illusion!

If your book is an anthology: What was the most important criteria in your selection process?

This is a juried anthology. The stories were chosen by three authors who couldn’t submit and who didn’t know who wrote each submission. What we told these authors boils down to this: We want great stories—ones that entertain and touch you or could meet that standard with editing.

These are for the editors:

Donna Andrews is the Agatha, Anthony, and Lefty award-winning author of (to date) thirty-four novels and rather a lot of short stories, over a dozen of which have actually been published. She has been a coordinating editor of the Chesapeake Crimes anthology series since Volume 1. She’s a former executive vice president of Mystery Writers of America and a longtime member of both MWA and Sisters in Crime. For more information about Donna and her writing, please visit her website.

Barb Goffman has won the Agatha, Macavity, and Silver Falchion awards for her short stories, as well as the Readers Award from Ellery Queen’s Mystery Magazine. She’s been a finalist for major crime-writing awards 36 times and currently has two stories nominated for the Agatha and one nominated for the Derringer. Barb makes her living as a freelance editor, focusing on cozy and traditional mysteries. She’s also an associate editor of Black Cat Weekly magazine. To learn more about Bard and her writing, please visit her website.

Marcia Talley is the Agatha and Anthony award-winning author of Done Gone and seventeen previous novels featuring Maryland sleuth Hannah Ives. She is author/editor of two star-studded collaborative serial novels. Her prize-winning short stories appear in more than a dozen collections. Marcia is president of the Mid-Atlantic Chapter of Mystery Writers of America and a past national president of Sisters in Crime. To learn more about Marcia and her writing, please visit her website.