A Lesson in Fear from Someone Who Knows 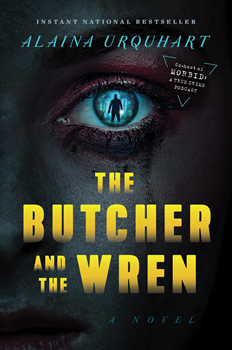 Hunting at night is a lesson in fear. It teaches you to control your instincts and accept the unfamiliar sounds that slither out from hidden places once the sun goes down. Night dwellers know that the silence is a myth. It is always loudest at night.

In Alaina Urquhart’s THE BUTCHER AND THE WREN, a man named Jeremy knows all of that very well. A second-year medical student at Tulane University, his interests in experimentation go way beyond anything he’s been taught in class. His father’s advice echoes in his mind: “You want to learn about something, son? You have to open it up.”

And open it up he does. The press calls him the Bayou Butcher now. It’s a bit tedious, but at the same time kind of fun, especially now that forensic pathologist Dr. Wren Muller is on the case. Everyone talks about how brilliant she is, but no one knows her the way Jeremy does. He knows her secrets—and they will lead her right into his hands.

A serial killer novel like none you have ever read, THE BUTCHER AND THE WREN takes a cat-and-mouse chase between two instantly memorable antagonists and turns all the conventions of the genre upside down. Dark, twisty, full of authentic detail, it’ll have you listening to the night in an entirely different way.

Urquhart comes by that authenticity naturally. She holds degrees in criminal justice, psychology, and biology, and makes her living as an autopsy technician.

“It was honestly something very organic for me,” she says. “I had been in pre-med for college and planned to go to medical school. I got sidetracked from that but still wanted to do medical research and work within the bounds of the medical examiner’s office at some point. It was my dream to be a forensic pathologist. Luckily, persistence is my strong suit and I kind of annoyed my way into a meeting with the doctor who was running the autopsy department where I wanted to work! I just wouldn’t let it go. In the end, he ended up becoming a mentor and a really great friend. We did some research projects together and eventually, it led to shadowing in the morgue and then a full-blown position. It was hard work to get there, but it was so worth it. I would work a million overnight shifts just to do what I do. I truly enjoy it and that’s rare to find in a job!

“My experience as an autopsy technician really came in handy for this novel. Even things I wasn’t sure of, I was able to check by falling deeply into medical journals. It was so fascinating and I learned some things that I never would have, had I not been looking for such odd facts. Not to mention that I have never been to most of the places in this book, so it was a lot of research and a lot of Google Earth. I also ended up researching laws for hunting wild pigs in Louisiana one particular evening, so that was a first for me.”

There’s more than a little of herself in Wren.

“I think Wren is who I always wanted to be,” she says. “We are alike in a lot of ways for sure. We’re both stubborn, and hardworking (to a fault sometimes) and we both love to find the logic and reason in every situation. But like Wren, I love to let tarot cards give me some insight too, and appreciate the magic in the world, even if I am a bit skeptical of it at first. Our jobs are obviously similar as well, and being an autopsy technician allowed me to get into her head a bit more.

“Where we differ is her strength. I like to fancy myself a pretty strong person, but Wren is where strength goes to get more strength. She’s a truly amazing person to be able to stay in the field she does after what she’s been through. She’s able to turn unbelievable trauma into positivity and that’s hard to do.

“The novel itself has been kicking around in my head for years before I actually put fingers to keyboard. I had a weird nightmare years ago that I was being chased through a swamp. Terrifying, but there were loud, inorganic noises being pumped in. I woke up in a cold sweat and immediately scribbled it into a notepad. It was too weird and too scary not to.”

She credits other inspirations as well. “I absolutely love horror movies and I have a real love for anatomy. Both of these parts of my brain contributed a lot to this book. Silence of the Lambs, Stephen King, Patricia Cornwell, Scream, A Nightmare on Elm Street… they all constantly inspire me to be scarier and to push it further in my fiction writing.”

She uses the term “fiction writing” advisedly, because Urquhart is also well-known for the highly-rated true crime podcast she’s co-hosted since 2018, Morbid, which delves into crimes and killers both famous and lesser-known, from the Golden State Killer to the murder of Matthew Shepard. “Her days are usually spent either recording or eviscerating,” her bio says cheerfully.

Among the cases that stand out for her: “the Moors Murders with Ian Brady and Myra Hindley. They were just true evil in its scariest and purest form. The stories of what those children endured and the callousness that those two could show in regard to their grieving families was something I can never stop thinking about. Researching this led me to some transcripts that I wish I never found. These two monsters audio recorded their torture and it is mind-torching.

“The West Memphis Three case is another one that always sticks with me simply because of the miscarriage of justice that occurred and the fact that there is still someone out there who murdered three innocent eight-year-olds.”

Listeners also send in their own stories, which Morbid includes as Listener Tales. “They are wild,” Urquhart says. “They can be hilarious, terrifying, sad or inspiring, and sometimes they are all of those things at once. The listeners who send them in are brilliant storytellers and don’t even realize it most of the time. We have so many narrow kidnapping misses that astound me. We had one recently where a listener narrowing escaped being kidnapped by what they later figured out was the infamous Crossbow Killer. It was sobering and really scary.”

Also scary—plunging headfirst into the book publishing process. “Honestly, I was a true walking personification of anxiety throughout the whole thing,” Urquhart says. “Any writer who goes through it knows that the second-guessing of yourself and the constant radio silence can really make you feel like you’ve lost your mind a bit. I am a person who needs to be constantly updated. So having to go through long periods of time where people were just reading or not responding at all was torture. Any writer could probably attest to the fact that you create some of your best fiction work during this process because you will make up an entire epic fantasy novel worth of material for why no one has responded to your submission yet!”

What’s next? What is she working on? “Taking over the world, of course! I swear I’m kidding. Truthfully, I hope Wren’s story keeps going. I want to stay in her world and I want to stick around with Jeremy for a bit. I also have some other stories outside of TBATW’s world that I would love to get out there,” she says. “The wheels are in constant motion and my dream would be to just Stephen-King it and write, write, write.

“This has all been a dream come true. I can’t express enough how in absolute awe young Alaina would have been to get her chance to write books for a living. It’s so humbling, and so fulfilling. I am forever grateful to anyone who gives this book a chance.”

He is currently writing a monthly publishing column for the MWA newsletter The Third Degree, as well as a regular ITW-sponsored series on debut thriller authors for BookTrib.com and is an editor at large for CrimeReads.