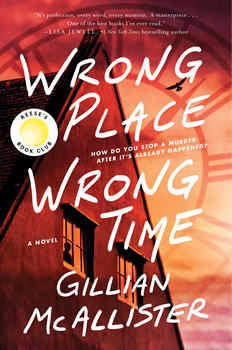 How do you prevent a murder after it’s already happened? That’s the question in bestselling author Gillian McAllister’s newest thriller WRONG PLACE WRONG TIME, a book with the story told backwards.

Jen Brotherhood is a divorce attorney, happily married to Kelly, an easygoing, quiet independent construction contractor who’s never wanted to be in the spotlight. Life is good, at least until that October night right before Halloween when Jen and Kelly witness their 18-year-old son, Todd, stab a man to death in front of their house. Watching their nerdy bookworm son take another man’s life shocks the hell out of them. That night, Jen cries herself to sleep, not knowing if there is anything she can do to help her son.

When Jen wakes up the next day, confusion assaults her as she realizes everything has gone back to the way it used to be. She doesn’t understand how it could happen, but it’s the day before the murder. Kelly has almost convinced her the horror of yesterday was only a dream. But if that’s so, how can she correctly predict everything that happens that day? Jen hopes that finding the knife in her son’s backpack and confronting him, will be the end of this horrible nightmare. After all, he can’t commit a murder without the murder weapon. Hopefully, she’ll just wake up to her normal life in a new day—one she hasn’t already lived through.

But when she wakes, it’s now the day of the murder, minus two. 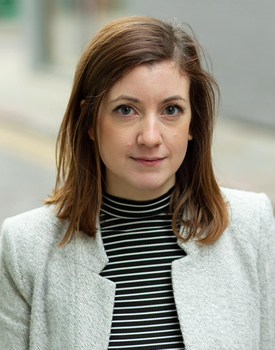 Although she still doesn’t understand what’s going on, Jen believes she’s stuck in a time-loop, traveling back to the days that are “significant”—days that she needs to pay attention to. On each day she relives in the past, there is either something she must learn that she didn’t pick up on the first time, or there are actions she must change that might prevent her son from becoming a murderer. She’s not sure how far back the time-loop will take her, or whether it will ever stop.

And what about the “butterfly effect”? How does she know what should be changed to prevent the murder? If she alters the wrong things in the past, will the future be even worse?

Kelly has always been reticent. Self-employed, he’s never wanted to work for anyone else. Her husband is a homebody; he doesn’t like to travel, and he’s quiet around acquaintances, like he doesn’t want to garner attention. But as Jen relives their past, she discovers her husband is not who she thought he was. The secrets he’s kept from her might just cause their family to implode.

“How sinister it is to relive your life backwards. To see things you hadn’t at the time. To realize the horrible significance of events you had no idea were playing out around you. To uncover lies told by your husband.” 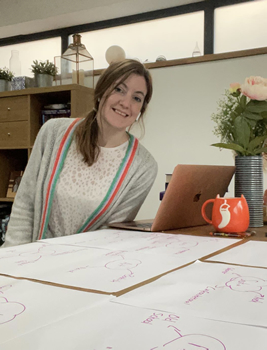 McAllister writes at home with her plot and character plans.

And another question plagues her: Has she been a good enough mother to Todd? Or did her absence because of her job somehow cause him to become a murderer?

As Jen travels backward, again and again, she prays the universe will keep bending time until she learns the lessons that will keep her son safe. But what she learns about her family is way more than she bargained for.

Here, McAllister talks with The Big Thrill about how WhatsApp might just be a writer’s best brainstorming tool, a time-loop used to alter the future, and the possibility of time travel.

I understand that texts with your friend Holly inspired this novel. How did the series Russian Doll and the movie Groundhog Day play into your inspiration?

I find it amazing that I indeed do a large amount of my job on WhatsApp! There’s something so safe about it… the ability to just send ideas out into the ether, brainstorm with (what feels like) fewer stakes than a blank page. Holly is the first to hear all of my ideas, always. The safety to me of the WhatsApp box allows me to throw around off-the-wall ideas that often become complete novels.

I watched Russian Doll a few months before I had the idea for WRONG PLACE WRONG TIME, and I realized that I hadn’t seen many time-loop thrillers in fiction, particularly about solving a crime. That percolated for some time, and then later I saw a segment on knife crime, and the idea was born: Why not go backwards to stop a knife crime? 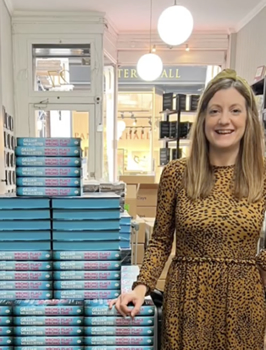 McAllister signs books while out on the road.

What about the “closed time-like curve” and the multiverse?

I think—and I have limited understanding of this, just enough to write the book—a closed time-like curve is a circle in space and time that returns to the same point. A few scientists consider this to be the basis in physics for entering a so-called time-loop. Theoretically, whatever you do within the loop creates alternate reality upon alternate reality, a multiverse. I was pretty loose with the science in my novel, as I figured my readers would want to read fiction, not science.

Do you believe in time-travel and parallel universes?

Not really, but what I would say is that the moment I had this novel idea, I knew it would change my life. Full of bravado, I said this to my husband, and it’s happened. I find it especially romantic that I had a premonition about a novel I wrote that contains a premonition.

What’s the one thing in your personal history that you would change if you could go back in time?

I would say go back in time and stop myself from getting mononucleosis, which destroyed a couple of years of my twenties. But I also wrote my first novel in bed sick with it, so I look back and am thankful for it now, in a way. 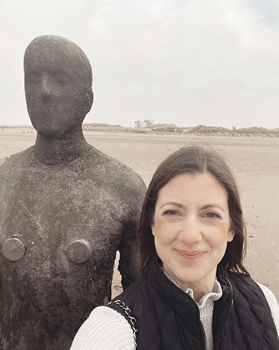 Most women feel shame about the choices they’ve made and the way they’ve set out their priorities, but that we’re all doing our best.

It’s called Just Another Missing Person, about a woman forced against her will to take a bribe.

Finish the draft! As an aspiring author, I often got bogged down in tinkering with the first 20,000 words, and moving on to the end was the only thing that broke that pattern for me.

I had a draft text message for eight straight weeks on my phone, returning my puppy to the breeder. I never sent it, and I love her now, but boy was I close!