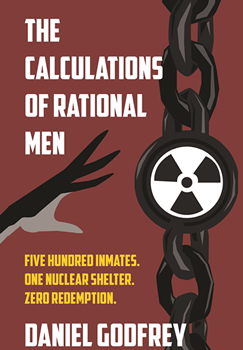 Author Daniel Godfrey offers up a terrifying “what if” scenario in his latest thriller, THE CALCULATIONS OF RATIONAL MEN.

The date is December 1962. The Cuban Missile Crisis remains fresh in the minds of all incarcerated at the HMP Queen’s Bench. Amongst them is Joseph Marr, a physician found guilty of murder. While all but the newly imprisoned Marr are sound asleep, the wardens at the Bench come hammering on the cell doors: the Soviets have launched a nuclear attack, and the men only have minutes to save themselves.

Joseph Marr soon finds that the Bench has been built atop a purpose-built fallout shelter, one of many the government has constructed across the UK to try and save at least some of the population in the event of thermonuclear war.

Prisoners, wardens, and soldiers must now work together to forge a new future, even if some inside the shelter can only think of how to turn the situation to their personal advantage.

Here, Godfrey shares more about his chilling new tale with The Big Thrill.

This was very much a setting-driven book. I’d been originally looking at a story about long-distance spaceflight, but the research led me in a very different direction. It helped a lot that there is a fallout shelter in York. (It’s not one of the hidden ones—it’s right in the middle of the city). Once the setting was fixed (a fallout shelter, with a prison above it), I needed a character that could move between the boundary of prison warden and inmate, and this is how Dr. Joseph Marr developed.

I like mixing together tension, technology, and mystery. My previous books had science fiction elements, so the technology part of this book was more rooted in the 1960s but the principles of researching the “what if” was largely the same as with my previous books. And then all the Cold War intrigue really adds to the tension and suspicion. My second book (Empire of Time) sort of played around with cold war ideas, but this novel has allowed me to explore these concepts a bit more fully.

A lot of time in fallout shelters would have been sat waiting and not doing much—not exciting enough for a thriller! So a bit of baked-in tension between the different sets of participants—soldiers, wardens, prisoners—was required to get things going! And then, of course, I could set in motion the fun stuff of things going wrong.

I hadn’t appreciated just how much thought had gone into winning an A-bomb war, and then the shock in UK Government that the hydrogen bomb had changed everything and there would be no winners. You can see this shock in UK Government historical documents quite clearly and confusion about what strategy they were going to pursue. Most of this stems from just how few H-bombs would have been needed to destroy the UK. I think we have a picture in our minds from movies of every town being individually hit. But in reality, only 10 or so bombs would have been needed, if the wind was blowing in the right direction to disperse the fallout.

I’ve tried to give Dr. Joseph Marr the medical knowledge he’d have in the ’60s. He’s not one of these doctors/scientists who is “wise before his time.” At one point, he is annoyed he doesn’t have access to an antiseptic which has since been found to contain mercury.

I have an old set of Ian Fleming paperbacks, and my favorite novel from them is From Russia with Love. From my bio, though, you’ll be unsurprised to also see a lot of sci-fi on my bookshelves from Dune, to John Wyndham, to Star Wars and Star Trek tie-in fiction. More recently, Mo Hayder is a standout in terms of mixing crime and horror.

If there was a large-scale nuclear war, would you rather die in the first strike—or try and keep going?

To be honest, if I was within the intense fallout areas without shelter, then I’d probably prefer to be gone—anywhere else I’d like to see if I could make it.

DANIEL GODFREY is a writer of the techno-thrillers. His first book, New Pompeii, was chosen as a ‘Book of 2016’ by both the Financial Times and Morning Star. The Guardian newspaper included The Synapse Sequence in their roundup of the best recent science fiction in June 2018.

Daniel was shortlisted for Best Newcomer at the British Fantasy Awards, 2017 (for New Pompeii).

He is from the Yorkshire coast and currently lives and works in north Derbyshire.