Features, Latest Books, Up Close
1 month ago
by April Snellings
0

From the Hazel Wood to the Chicago Suburbs 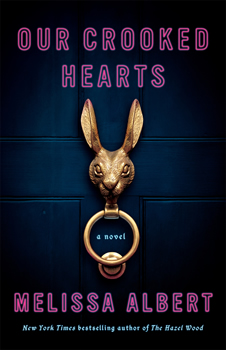 It’s an exciting time in an author’s career, and probably a frightening one: leaving behind the relative security of a popular series to tell new stories and flex new creative muscles. Melissa Albert’s 2018 debut, The Hazel Wood, was a New York Times bestseller that inspired both a direct sequel (2020’s The Night Country) and a companion story collection (Tales from the Hinterland, released in 2021).

She’s stepping away from that world for the first time with OUR CROOKED HEARTS, a glittering, sharp-fanged tale of a mother and daughter bound by blood and magic. Ivy is 17 years old and already off-center when a strange roadside encounter leaves her with far more questions than answers about her mother, Dana. Soon Ivy is seeing someone else’s face when she looks in the mirror and digging up mysterious, blood-smeared jars in her mom’s herb garden. Then there are the strange gestures Dana instinctively makes when she’s threatened—and is that a rabbit’s tooth she discreetly spits into her hand at dinner one evening?

Fast-paced, unsettling, and intensely atmospheric, OUR CROOKED HEARTS is shot through unforgettable images and irresistible mysteries: A wild woman calls from a suburban forest creek; a golden box, electric with dark promises, lies hidden at the back of a mother’s closet. There is, of course, magic afoot, and if you’ve read The Hazel Wood, you know these women aren’t dabblers in the realm of Disney enchantment. This is something different—dangerous, feral, and all-consuming. The story unfolds in dual timelines as Ivy tries to unravel the mystery that is her mother, and flashbacks recount Dana’s supernatural coming-of-age in 1990s-era Chicago with her best friend, Fee, and a new girl, Marion, who has punk in her CD player and dark magic in her heart.

In her first-ever interview with The Big Thrill, Albert talks about mothers and daughters, writing with the headlights on, and leaving the Hazel Wood for the eerie, twilight spaces of Chicago.

Can you pinpoint a moment or incident that sparked the idea for OUR CROOKED HEARTS?

With the Hazel Wood duology, I was writing urban fantasy/portal fantasy mashup. With OUR CROOKED HEARTS, I was determined to write a specifically suburban fantasy: something with the noirish magical snap of urban fantasy, but in a deeply specific, sorta menacing/Lynchian suburban setting—parking lots, Denny’s and big box stores, driving through the empty streets at night. In the end, half the book ended up being set in 1990s Chicago, so it turned out to be an urban/suburban fantasy hybrid.

You’ve had great success with the Hazel Wood books. How does it feel to step away from that world?

I wrote two novels set in that world, followed by a related fairy tale collection. Writing the fairy tales was the perfect bridge to saying goodbye to the Hazel Wood multiverse I loved so much. And the bizarre, suspended-yet-frantic headspace of the early months of the pandemic turned out to be the perfect spur to writing something completely immersive and new.

You’ve talked about how The Hazel Wood and its sequels draw on both fantasy and noir. What influences shaped OUR CROOKED HEARTS?

My own upbringing and the odd obsessions of my teen years can be found in both halves of the story: like me, Ivy is a bored and yearning suburban kid who suspects (in her case far more rightly than mine) that there’s something bigger and deeper and stranger to her life that she can’t put her finger on. Like me, Dana is a magic seeking, riot grrrl-loving wannabe witch, but only one of us succeeded in actually performing magic. I’ll let you guess who. As far as literary references, I think you can see my love of Neil Gaiman and Monica Furlong and probably some Francesca Lia Block in there.

A novel is such a major undertaking; there’s the writing of it, of course, then you’re spending months and months revising, polishing, and then promoting it. How did you know this was the story you wanted to spend the next couple of years with?

What a great question. Someone once described it to me like this: knowing which ideas you want to see through to completion is like knowing, when you meet someone, whether you’d like to date them yourself or set them up with a friend. I do have story ideas I wish someone else would write so I could read them. But I knew when I finally caught the tail of this book that it was a story I would happily live inside for as long as it took.

The complexities of mother-daughter relationships are at the heart of both the Hazel Wood series and OUR CROOKED HEARTS. What keeps you coming back to that theme?

The Hazel Wood is very much a book written by a daughter, cooked up out of the themes I love in fairy tales as well as my powerful bond with my own mother. This book could not have been written before I became a mother myself. It’s both an homage to my favorite genres—contemporary fantasy, thriller, horror, mystery—and a record of my evolving understanding of what it is to be a parent and all the ways you’re responsible for preparing your kid to be a person in the world. And the terror of messing it up.

What are some of the tools you use when a story first starts to come together for you? Do you use outlines, beat sheets, anything like that?

I use the headlights method: I don’t plot ahead of time, but I like to have an idea of what’s right in front of me, at least for the next chapter or two, as well as a vague sense of where the story will end up at the end. As I draft, I’m constantly adjusting and taking copious notes on scenes that could happen, settings I might want to use, character backgrounds and histories and all sorts of things that may or may not make it onto the page, and periodically going back to the start to identify and eliminate big problems and dead air.

What did you enjoy most about writing OUR CROOKED HEARTS, and what gave you the biggest headache?

I enjoyed the drafting of this book more than I’ve enjoyed just about any writing in my life, because it was my escape from the stunted realities of pandemic life. I’ve never relied on creative work more for sanctuary, and I’ve never felt more grateful for fiction as both a writer and a reader. The biggest headache came later in the process, when I had to figure out how to sensibly and tantalizingly weave Ivy’s and Dana’s threads together. That took a LOT of juggling.

Back in 2012, a much-publicized survey found that 55 percent of YA readers are adults. When you write, are you thinking more about teen readers or adult ones? Do you consciously consider that crossover market?

When I was a teen, I read books from every category, middle grade to adult. I read poetry, graphic novels, zines, magazines. I read the random stuff on my parents’ shelves and books I found for free in train station take-a-book nooks and for a quarter at garage sales and in the trade paperback spinners at the library. All this is to say that my books have the hopeful heart and young characters of most YA, and from there, I figure I can take teen readers with me anywhere. And there’s so much great storytelling happening in YA that it’s no surprise lots of adults want to go with it, too.

Can you tell us anything about what you’re working on now?

My next book is a supernatural thriller with suburban gothic vibes about mysterious vanishings and ferocious female friendship and self-made magic born out of vengeance and love. And it’s fun! Well, I’m having a lot of fun writing it.