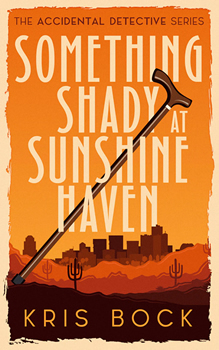 She’s pursued the most dangerous news stories around the world. But can she survive going home?

Injured in a bombing, war correspondent Kate Tessler returns to her hometown in Arizona to recover. For the first time in her life, she’s starting to feel her age of nearly fifty despite living like a teenager again: staying in her childhood bedroom with only a cat for company, trying to understand why her sister resents her so much, and running into people who still refer to her as Kitty. The hardest part? Seeing her once-sharp and witty mother stuck in an Alzheimer’s unit.

When an old friend asks her to investigate suspicious deaths at the nursing home, Kate limps into action. Is a self-appointed “Angel of Mercy” killing patients to end their suffering? Are family members hastening their inheritance? Is an employee extorting money and removing the witnesses? Kate uses her journalism skills to track clues, but the puzzle pieces simply won’t fit.

If Kate can’t uncover the truth quickly, her mother could be next on the killer’s list.

TheBigThrill caught up with Kris Bock to discuss the first installment in her Accidental Detective series, SOMETHING SHADY AT SUNSHINE HAVEN:

Why did you set the series in the Southwest?

I’ve lived in New Mexico for over twenty years, three times longer than I’ve lived anywhere else, so this is home. I wanted to set the mystery series in a big city, and in Arizona, I could create a fictional city within the greater Phoenix metropolitan area. Arizona also provides tons of mystery opportunities. The large senior population attracts scams and abuse. You have the potential for arguments over inheritance (or even murders to get that inheritance sooner). Plus you have all the usual potential crimes in any large population, so I’ll be able to keep Kate busy for years.

As I faced 50, I wanted to create a mystery lead dealing with some of the same issues: aging parents, concerns about financing retirement someday, and a body that doesn’t recover like it once did. In the Accidental Detective mystery series, Kate is trying to reinvent her life as she turns 50. She spent 30 years as a war correspondent, so she’s pretty fearless, but that doesn’t always help her with the challenges of aging. I don’t think you see a lot of main characters like that in mysteries, but we deserve representation too!

My editor said, “One of the things I loved was how you had the three generations all working together. Everyone had value.” The book is humorous, but I want readers to laugh with my characters rather than at them. The topics aren’t always light – the first mystery takes place in a nursing home – but the warmth of the characters and the humor make it a comforting read.

Kris Bock writes novels of mystery, suspense, and romance, many with outdoor adventures and Southwestern landscapes. Get a free Accidental Detective short story and bonus material when you sign up for her newsletter.