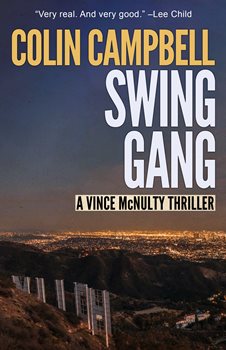 “In hindsight I think we should have stayed in Boston.”
“Thought you always wanted to be Mr. Hollywood.”
Larry Unger looked at McNulty. “Do you know how much they charge for location services in Los Angeles?”

Titanic Productions has moved to Hollywood, but the producer’s problems don’t stop with the cost of location services. When McNulty finds a runaway girl hiding at the Hollywood Boulevard location during a night shoot it brings back memories of his life in Crag View Orphanage.

He takes the girl under his wing, but after somebody breaks into the compound looking for her, she runs away again. Between the drug cartel that wants her back and a hitman who wants her dead, McNulty must try and find her again before California wildfires race toward her hiding place.

I keep coming back to a previous answer. It all starts with having fun. If the reader isn’t having a good time, then they’re not going to take anything away from the book. I’m not here to send a message or change the world. I just want to tell a good story, while digging deeper into the life of Vince McNulty.

I like a story that moves. A book you can’t put down. And I like characters that get in too deep then dig themselves out. Crime fiction has all that in spades. It doesn’t hurt being ex-army and retired police. And an avid reader.

I actually stayed in a hotel on the low rent side of Hollywood Boulevard that wasn’t far from the opening location in the book. I used to have breakfast at Starbucks just along the road. This one time, I was in the queue when a very argumentative homeless woman came in demanding two of this and a cup of that. The barista simply offered a free single this and a takeaway cup of that and completely defused the situation. I was impressed. The woman left as happy as a songbird.

This answer will never change because my past is set in stone. As a reader I was influenced by C S Forester, Stephen King, and Ian Fleming. Then I found Joseph Wambaugh, and my direction was set. As a retired police officer, how could I not write crime fiction? My first crime books were in support of The Boys in Blue, but then I slipped into thriller territory, and my inspirations changed. Lee Child, Michael Connelly, Reed Farrel Coleman, Nick Petrie, and Ace Atkins. Everything you read and watch influences your choices. Everywhere you go filters into your choice of location. I suppose the simple answer is, I’m influenced by everything.