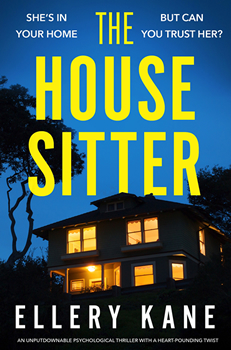 Forensic psychologist by day, novelist by night, Ellery Kane has been writing stories as long as she can remember. But real life really is stranger than fiction, and Kane’s day job often inspires her writing. While evaluating violent criminals and treating trauma victims, she has gained a unique perspective on the past and its indelible influence on an individual’s present and future.

“In my line of work, I talk with people every week who come from very different backgrounds and life experiences than myself, often difficult and painful ones,” she says. “I’ve used snippets from people I’ve interviewed and been inspired by their personal histories to bring to life complex characters in my stories who are equal parts hero and villain, because that is what people are. We aren’t all bad or all good. We’re a little bit of everything.”

In her first domestic thriller, THE HOUSE SITTER, Kane draws on more than just her job to inform her writing—in this instance, she pulled the gist of the story from her own personal life experience. “I had a close, elderly family member taken advantage of financially by a young couple who helped him keep up the farm, running errands, getting him to appointments, and such, all out of the goodness of their hearts. As it turned out, their hearts had nothing to do with their motivations. They took money from my relative whenever the opportunity presented itself. Unfortunately, the two never saw the inside of a jail cell, or otherwise paid for their sticky fingers.”

In THE HOUSE SITTER, that couple is Lydia and Seth, who are down on their luck, living hand to mouth, and one paycheck away from living in their car, when a chance meeting offers them a golden ticket out of their penniless predicament—live-in jobs caring for Iris, a rich, elderly woman, and her plush Pacific Heights estate. While Seth uses the position to skim money from Iris to feed his gambling habit, Lydia enjoys her new role and soon becomes the daughter Iris never had—making her cups of tea, helping her with the bills, and taking charge of Iris’s daily medications now that her memory has begun to fail. 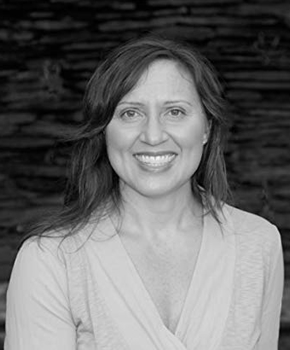 Life is good for everyone until one night, when Iris’s frantic 911 call ends abruptly with the sound of a gunshot. Maureen, a rookie cop, and her partner respond to the scene. Iris is missing. The only evidence of her fate: a blood-soaked handkerchief. Lydia and Seth are the obvious suspects, but the two appear to have solid alibis, and without a body or hard evidence of a crime, the detectives on the case are at a loss as to what happened that night. Unsatisfied with the pace of the case, Maureen starts her own investigation against department policy. With each clue she uncovers, the young cop comes closer to solving the mystery of Iris’s disappearance. That is, until she discovers information that sheds new light on the woman’s fate. A clue that has Maureen reconsidering her approach, looking for answers to two puzzling questions: Who is the real victim in the case? Who is really in danger?

At its core, THE HOUSE SITTER is a twisting tale of three women—Lydia, Iris, and Maureen—seemingly brought together by chance but whose fates are irrevocably intertwined. Kane unfolds the story masterfully with alternating POVs, reflecting the complex lives of the women both before and after that fateful night, building suspense with each page as the dark, traumatic pasts of her characters converge into the present with a startling conclusion.

This before-and-after approach to storytelling comes naturally to Kane. “To me, it just makes sense. As a psychologist, I know that how people present themselves today is a total reflection on everything that happened before, and similarly, today influences what they show tomorrow and the next day.” It’s a structure she loves, allowing her readers to flesh out the characters for themselves, understanding their thoughts, motivations, personalities, and behavior as the story is driven to its inevitable, twisting finale.

“Structuring my stories this way also allows me to imbed subtle clues and hints about the characters that lead to the twists and turns the genre demands. At the same time, it sets up the most challenging part of writing suspense, as readers are becoming quite sophisticated, determined to spot every telling nuance that might foretell the final revealing twist.”

Kane’s personal connection to the story facilitated her writing, often drawing on her own memory of what the couple said, what they did, and how they behaved as they conned their way through her elderly relative’s bank account. But it wasn’t the ease of putting the words on paper that made THE HOUSE SITTER Kane’s favorite book to write. It was the catharsis, the closure of putting that awful personal episode behind her with a satisfying story, one in which the reader is rooting for Iris to prove herself stronger than anyone believes, able to defend herself, and in the end extract justice where justice is due.

And that, in the end, is the message Kane offers to readers. “THE HOUSE SITTER opens with a quote from Dr. Martin Luther King, Jr., ‘The arc of the moral universe is long, but it bends toward justice.’ In my day job, I come face to face with justice and injustice in many forms. But I’ve come to realize that, with enough time, justice usually prevails.” After reading THE HOUSE SITTER, Kane hopes you will agree.

Forensic psychologist by day, novelist by night, Ellery Kane has been writing—professionally and creatively—for as long as she can remember. Just like many of her main characters, Ellery loves to ask why, which is the reason she became a psychologist in the first place. Real-life really is stranger than fiction, and Ellery’s writing is often inspired by her day job. Evaluating violent criminals and treating trauma victims, she has gained a unique perspective on the past and its indelible influence on the individual. And she’s heard her fair share of real-life thrillers. An avid short story writer as a teenager, Ellery recently began writing for enjoyment again, and she hasn’t stopped since.

A Texan at heart, Ellery now lives in the San Francisco Bay Area of California, a picturesque setting that provides the backdrop for many of her novels. If you don’t find Ellery interviewing murderers behind prison walls or pecking away at her latest novel, she is probably at the gym landing a solid jab-cross to a punching bag, riding bicycles with her special someone, or enjoying a movie the old-fashioned way—at the theater with popcorn and Milk Duds.

Ellery was previously selected as one of ten semifinalists in the MasterClass James Patterson Co-Author Competition, and she is the author of the Legacy, Doctors of Darkness, and Rockwell and Decker series.