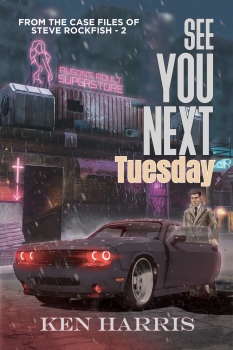 A private detective’s father falls for an online scam, and he vows to retrieve the cash while his partner takes on a client alleging infidelity. They unknowingly investigate the same organization from different ends, and after meeting in the middle, the grift is larger and deadlier than either expected. Can they trust their new associates when their path leads them to WMDs and a doomsday cult as old as time? How many bodies will pile up before the clock runs out?

Kenn Harris recently spent some time with The Big Thrill discussing his latest thriller, NEXT TUESDAY: FROM THE CASE FILES OF STEVE ROCKFISH:

I am really a fan of the 1970s and early 1980s private detective television shows. I loved the thrills and mystery of shows like The Rockford Files and Quincy M.E. Add in the humor and sarcasm of the Bruce Willis/Cybill Shepherd show Moonlighting. I like to consider my From the Case Files of Steve Rockfish series a mashup of these genres. Thrills, action, and suspense, with some solid belly laughs thrown in.

This book expands on the Rockfish and McGee partnership developed in the first book. You see the partners grow and learn to work together in a story that is faster paced and involved than any they’ve worked previous. The introduction of two new characters to the team brings the ever popular ‘force multiplier’ to the detective agency but also causes as many problems, incorporating new blood.

I have been strongly influenced by Peter Straub’s Blue Rose Trilogy. The strong characters of the books, some of which hit very close to home, have given me pause and rushed character development, especially over the course of more than one book. The character of Tom Pasmore and Tim Underhill are always in the back of my mind as I’m flushing out old or new characters.

Ken Harris retired from the FBI after thirty-two years as a cybersecurity executive. With over three decades writing intelligence products for senior government officials, Ken provides unique perspectives on the conventional fast-paced crime thriller. While this is his second traditionally published novel, he previously self-published two novellas and two novels. He spends days with his wife Nicolita and two Labradors, Shady and Chalupa Batman. Evenings are spent cheering on Philadelphia sports. Ken firmly believes Pink Floyd, Irish whisky, and a Montecristo cigar are the only muses necessary. He is a native of New Jersey and currently resides in Northern Virginia.

Something Shady at Sunshine Haven by Kris Bock