Features, Latest Books, Up Close
1 month ago
by Guy Bergstrom
0

A Modern Twist on the Locked Room Mystery 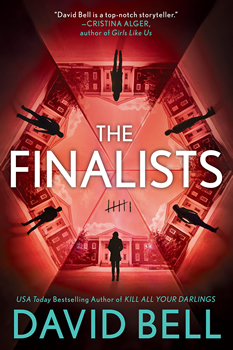 Solving an ordinary murder is difficult enough—only half of the 20,250 homicides in 2020 were solved by the police. But bestselling author David Bell’s new novel, THE FINALISTS, ups the difficulty and the stakes by making it a Locked Room mystery. In it, he sticks six college students competing for a fellowship in a creepy Victorian house with an administrator and the donor, unable to contact the outside world.

They’re stuck with a killer—but who is it, and how are they getting away with murder without anyone noticing?

Bell’s quite familiar with the financial pressures today’s college students face—he directs the Master’s in Fine Arts program at Western Kentucky University in Bowling Green and received his PhD in American literature and creative writing from the University of Cincinnati—so the circumstances surrounding the mystery, on some level, felt familiar.

He talks more about that—and some of his philosophies about thriller readers and writers in general—in this exclusive interview with The Big Thrill.

Plato feared stories more than rhetoric. What do you think mystery/thrillers touch upon that’s so visceral and enduring, and how does THE FINALISTS tackle those issues?

People love to read thrillers for the same reason they love to ride rollercoasters or go to haunted houses during Halloween season—it’s the vicarious, controlled thrill. The reader always knows they can put the book down and walk away if it gets too intense.

And there’s a part of the reader that thinks, “I’m so glad my life isn’t that messed up.” We can scream and be scared, like on the rollercoaster, and then walk away, back to our normal lives.

THE FINALISTS is a thriller with a mystery at its heart—who is killing the people in this house? But it’s also trying to tackle the serious issue of college debt and the financial pressures colleges and universities face.

I’m always looking for another reason why someone might try to kill somebody. I’d never done a locked room story before, and so I thought, What if I combined the locked room story with academia? Viola, you get THE FINALISTS–students willing to be locked into a creepy house with a creepy guy in order to pay for their college education.

There’s a large cast in THE FINALISTS because eight people are locked in the house together. I made the six students a cross-section of today’s college students, but the common denominator they all share is a desperate need to pay for school. And they all have issues outside of school involving their families and personal lives that come out in the book and affect their ability to pay for school as well.

What’s worth living for and what’s worth dying for is a traditional way to look at literature. This novel seems to ask the question of “What’s worth killing for?” from the antagonist’s POV—because they don’t intend to die.

The reader has to relate to the good person and the bad person, so you need to make both of them human. You want the reader to relate to the protagonist more, and to be an Everyperson, but the villain is not necessarily bound by that. They don’t have to be the Everyperson.

The reader has to understand them and see them in a complicated way, they can’t be the stereotypical guy twirling his mustache.

You have to have a powerful, interesting, smart antagonist and that pushes your protagonist into being as powerful, smart, and interesting as possible.

How did you fall into novels—did you go into academia first or start with novels and add teaching?

I always wanted to write and started thinking seriously about it when I was in college. My parents were eventually going to kick me out… and I wasn’t good at anything else.

I knew one way writers supported themselves was by being college professors. You have to wait to get tenure, you might have summers off, and you have some time to write.

Once I got into graduate school and was writing and teaching classes, I found I like it, and it all kind of evolved that way.

How have things changed since you started writing novels?

The process of writing a book hasn’t really changed. I might be more productive slightly.

The business has changed quite a bit. My first book came out in 2008. Social media is a big change. Sometimes I go back and look at my Facebook feed from when my first book came out, and you wouldn’t know it came out, I barely mentioned it. In the last decade, that’s evolved, with social media evolving into a major way to sell books, and not just Facebook—Twitter and Instagram and other platforms as well.

And the pandemic kickstarted more remote events, and that’s not a bad thing. You don’t have to hop on a plane and fly across the country, you can put writers in a virtual room and have them talk to readers.

I write about ordinary people in extraordinary circumstances. I write a lot about missing persons, secrets from the past coming to light in the present.

The business has become more interested in the high concept story, the book with an interesting hook or interesting setting.

Who are some of your favorite authors who inspired you to write?

In terms of mysteries, Elmore Leonard was a huge influence on me. Not that I write like Elmore Leonard. The interesting characters, the dialogue, the plot, it all came together in those books. You didn’t want the book to end. He was really a big one early one.

Robert B. Parker is another one who did that—some of his early Spencer novels were 40,000 words long. He was a master of the concise. Every word counts. Every word has an impact.

I’m always just interested in how other writers work, how they come up with an idea, do they make an outline, how much do they revise, how long it takes them to write a book. I’m interested in that stuff, and I think others are, including the readers of The Big Thrill, because either they’re a reader and curious about how things get done, or they’re a writer and want to know.

What’s your process to write a novel?

Then I write an outline, though once it’s done, I don’t usually refer to it, though it’s there. I try to write the first draft as fast as possible when I have time away from my day job.

I might be writing one book while copy editing or revising a different book. Life gets in the way—you gotta go to somebody’s wedding or funeral.

I have my first young adult suspense novel coming out, She’s Gone, set in a high school.

For next year, I’ll have another adult novel and YA novel coming out. As my mom would say, it keeps me off the streets.