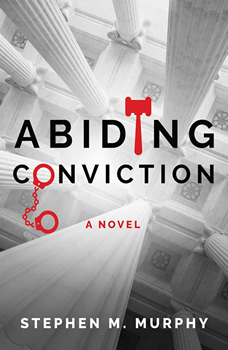 Lawyer Dutch Francis faces an impossible situation—search for your missing wife or defend your high-profile client.

Dutch Francis is a defense attorney in the case of a judge accused of killing his wife. Just as the trial is about to begin, Ginnie Turner, Dutch’s wife and TV news broadcaster, goes missing.

Under extreme duress, Dutch tries to extricate himself as the judge’s attorney—or at least postpone the trial. The judge insists that the trial proceed without delay and that Dutch remain his attorney.

Exhausted by the murder trial, Dutch confronts an ineffectual police department, suspicious that he is involved in his wife’s disappearance. He takes matters into his own hands as he struggles to balance both responsibilities—the trial and finding his wife—pushing him to the brink of losing everything he holds dear.

At first Dutch suspects that Ginnie was kidnapped in retaliation for her recent stories about sex scandals. But after receiving bits of her in the mail—fingernails, hair—he realizes the kidnapper’s intent may be to punish him.

Could his defense of the judge be the reason?

The Big Thrill caught up to Stephen M. Murphy for a rapid-fire chat about ABIDING CONVICTION, the third installment in his Dutch Francis thriller series:

Legal thrillers have built-in conflicts. I enjoy the back and forth of trials, the balance between a lawyer’s ethical duties to his clients, and his personal interests.

The biggest challenge was integrating two distinct plot lines: the kidnapping of Dutch’s wife and his defense of the judge accused of murder.

The biggest opportunity was to write compelling trial scenes in a fresh way.

I discovered that Dutch Francis can skirt the boundaries of the law when his wife’s life is threatened.

ABIDING CONVICTION was partly inspired by Gillian Flynn’s Gone Girl. I wanted to know how a lawyer would handle his wife’s kidnapping while he was trying a high-profile murder case.

Dutch Francis is a series character so naturally he came first.

Scott Turow, Barry Reed, Steve Martini, and Sheldon Siegel. All write about lawyers and the law with passion, authenticity, and heart.

And, finally, what fascinates you about the character of Dutch Francis?

Though he started out as a corporate defense attorney, he came to realize his legal talents were not being used to better society, so he switched to representing individuals. He learns from his mistakes and cares deeply about his clients.

Former trial lawyer Stephen M. Murphy is the author of the Dutch Francis thriller series. A Boston native, he is a graduate of the College of the Holy Cross in Worcester, Massachusetts, and the University of San Francisco School of Law. He served as a law clerk to the justices of the New Hampshire Superior Court, and while in New Hampshire, he worked on a murder trial that inspired his first Dutch Francis novel, Alibi, which was followed by About Power, and now ABIDING CONVICTION. He currently lives in the San Francisco area.