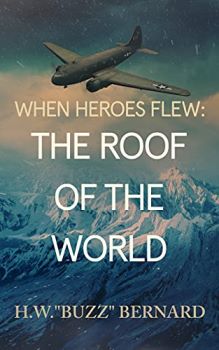 A legendary WWII airlift mission cuts through the snaggletoothed Himalaya Mountains—the Hump—where both the terrain and weather prove uncommonly savage. And American airmen leave a trail of blood and mangled aircraft across northern Burma.

Major Rod Shepherd, a C-46 pilot and Army Air Forces weather officer, flings his aircraft into the tumultuous skies to fly critical missions over the Hump. He braves not only the extreme—even impossible—flying conditions, but commanders who believe weather support is useless and a flight nurse who, for reasons unknown to Rod, dislikes him intensely.

Rod risks incredible danger with every flight. But when a mission of grave importance is imperiled at high altitude, Rod faces an unthinkable dilemma.

H. W. “Buzz” Bernard recently spent some time with The Big Thrill discussing his latest thriller, WHEN HEROES FLEW: THE ROOF OF THE WORLD:

I want readers to gain a sense of the bravery, dedication, and resourcefulness of the young WWII pilots who flew transports over the Himalaya Mountains and Burmese jungles in so-called “non-combat” roles. In prop-driven aircraft they flew at altitudes the planes were never designed for, and they battled the ruggedest terrain and worst weather in the world. Their losses were horrendous, their stories astounding.

From WWII, there is an endless supply of stunning tales and monstrous villains. The young men and women who went to war in 1941 rightfully earned the title of “The Greatest Generation.” Ordinary people became legendary heroes, not by design but out of necessity. Their stories have earned the right to be preserved.

While there are numerous WWII historical fiction books, few, if any, are based on the tales of the pilots who flew the “Hump,” as the route over the Himalayas was known. ROOF OF THE WORLD is set in the China-Burma-India Theater and focuses on the virtually impossible challenge of airlifting supplies from India to China over the ruggedest terrain in the world. It’s an aspect of WWII that few people are aware of. I hope the novel, in whatever tiny way it can, corrects that.

The novels of James Lee Burke have long been my North Star in terms of me navigating the thickets of learning the craft of writing novels. P. T. Deutermann’s WWII historical novels have also provided me superb inspiration. Other writers on my list: Reed Farrel Coleman, Michael Wiley, Tom Young, Alan Furst, Herman Wouk, and Gregg Hurwitz.

His debut novel, Eyewall, which one reviewer called a “perfect summer beach read,” was published in May 2011 and went on to become a number-one bestseller in Amazon’s Kindle Store.

He is currently at work on his fourth WWII historical fiction novel. It’s scheduled to be released in mid-2023.

Buzz is a past president of the Southeastern Writers Association as well as a member of the Military Writers Society of America, the International Thriller Writers, and the Atlanta Writers Club.

Although a native Oregonian, Buzz lived for 35 years in Atlanta, Georgia, and now resides in Kennewick, Washington, with his wife Barbara and their fuzzy shih tzu, Stormy . . . who doesn’t live up to his name.